The post has been a long time coming. I’ve been super busy with work and life…. not much has changed with the s2k besides bolting on the rear and front subframe with knuckles. Pretty much making it a real roller once I get some wheels. I did some small things along the way, such as installing power flex bushings. I got a whole bunch of goodies I’ve been hoarding over the years to install eventually…

The F20c Toda Dry Sump Kit is something I’ve been eying for years. Literally years… if you look back to posts like this from 2011, I’ve always looked at these parts in envy. A year or so back, someone posted this one for sale, after I found out it is DISCONTINUED, it was a done deal, the hoarder in me couldn’t resist.

The thing about these parts is that there is not much information out there besides the stock photos and description on Toda Racing’s site. I emailed Toda Racing USA and Japan for more information regarding the product, they replied to me saying that they have ZERO documentation. Even the person I bought this from, who bought this brand new told me this did not come with documentation. Kinda crazy when someone spends over $10,000 USD on this brand new and they receive no instructions. No worries, I’m crazy enough to think about installing this on a street car. Think is the keyword, but in reality, all I want to do is document this for the other S2k Otaku out there. This is some true nerd S2k nerd shit going on, hang on…. 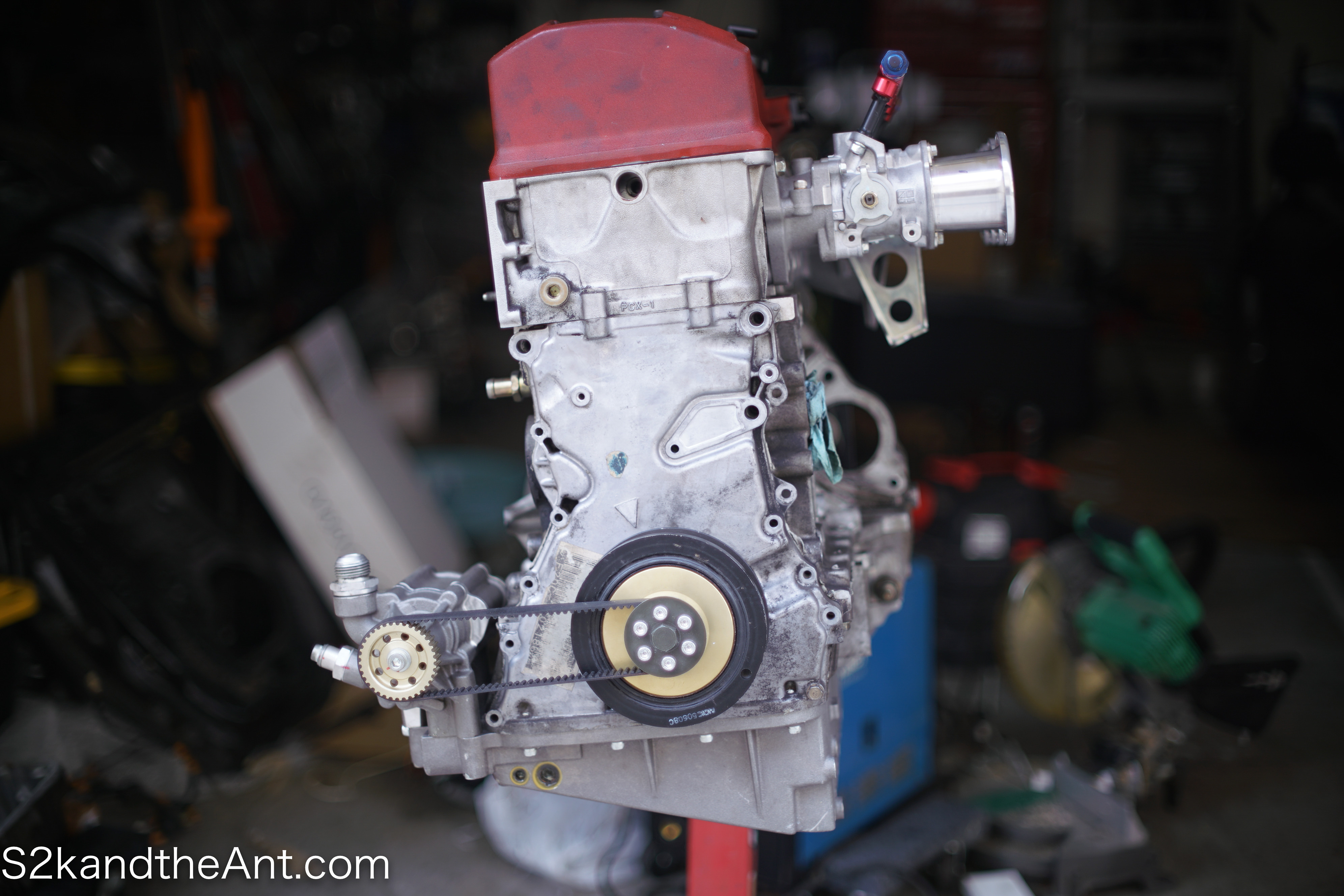 I’ve told you guys I’m a hoarder right? I was able to mock this setup on a spare blown engine I’ve had sitting around that someone gave me. The previous owner of the engine dropped a valve so, the engine needs a ton of love if I want to resurrect it, F24 stroker engine anyone? I also threw on my Toda ITBs for shits and giggles because it reminded of the Toda Racing stock photo I’ve been drooling over for years…. 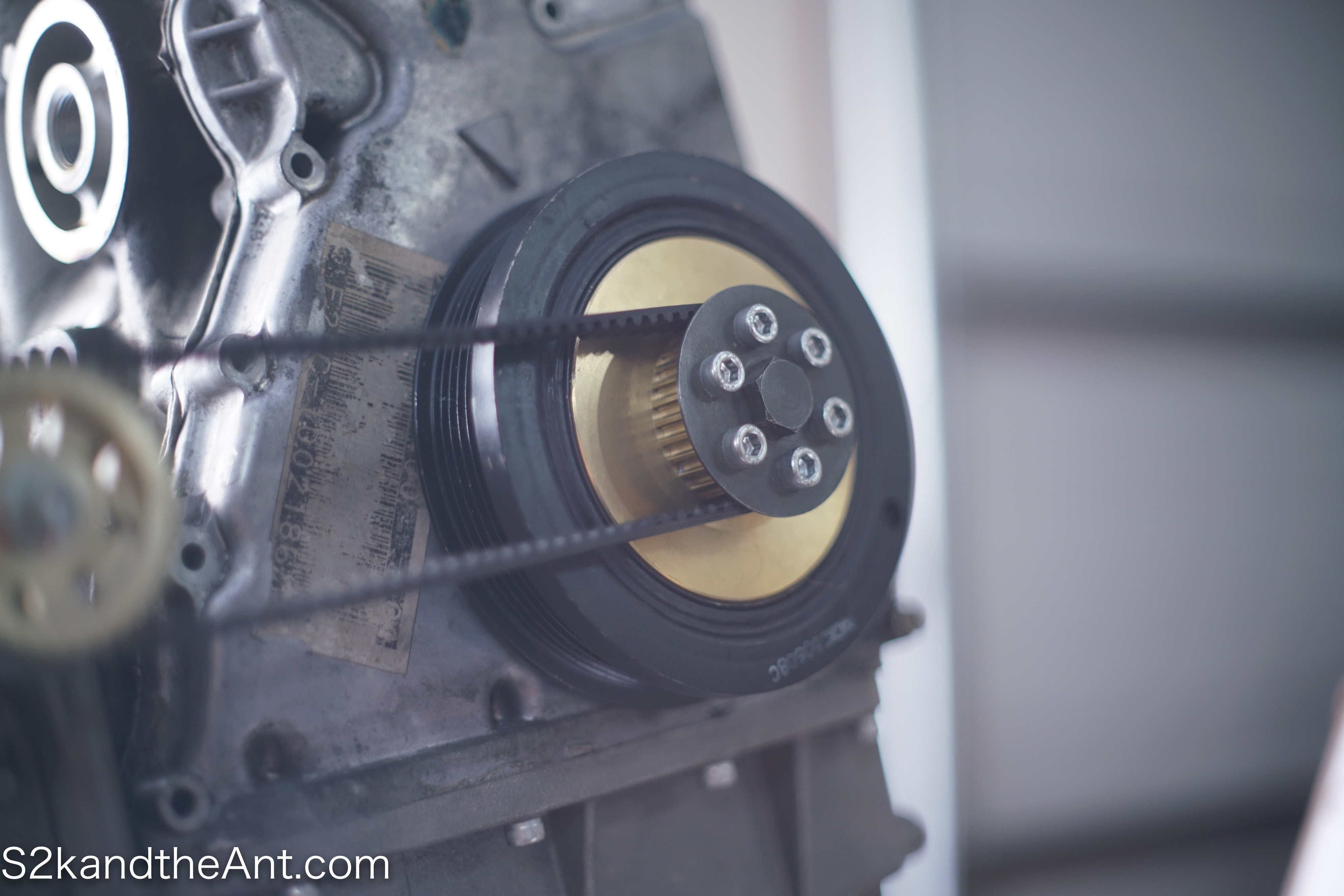 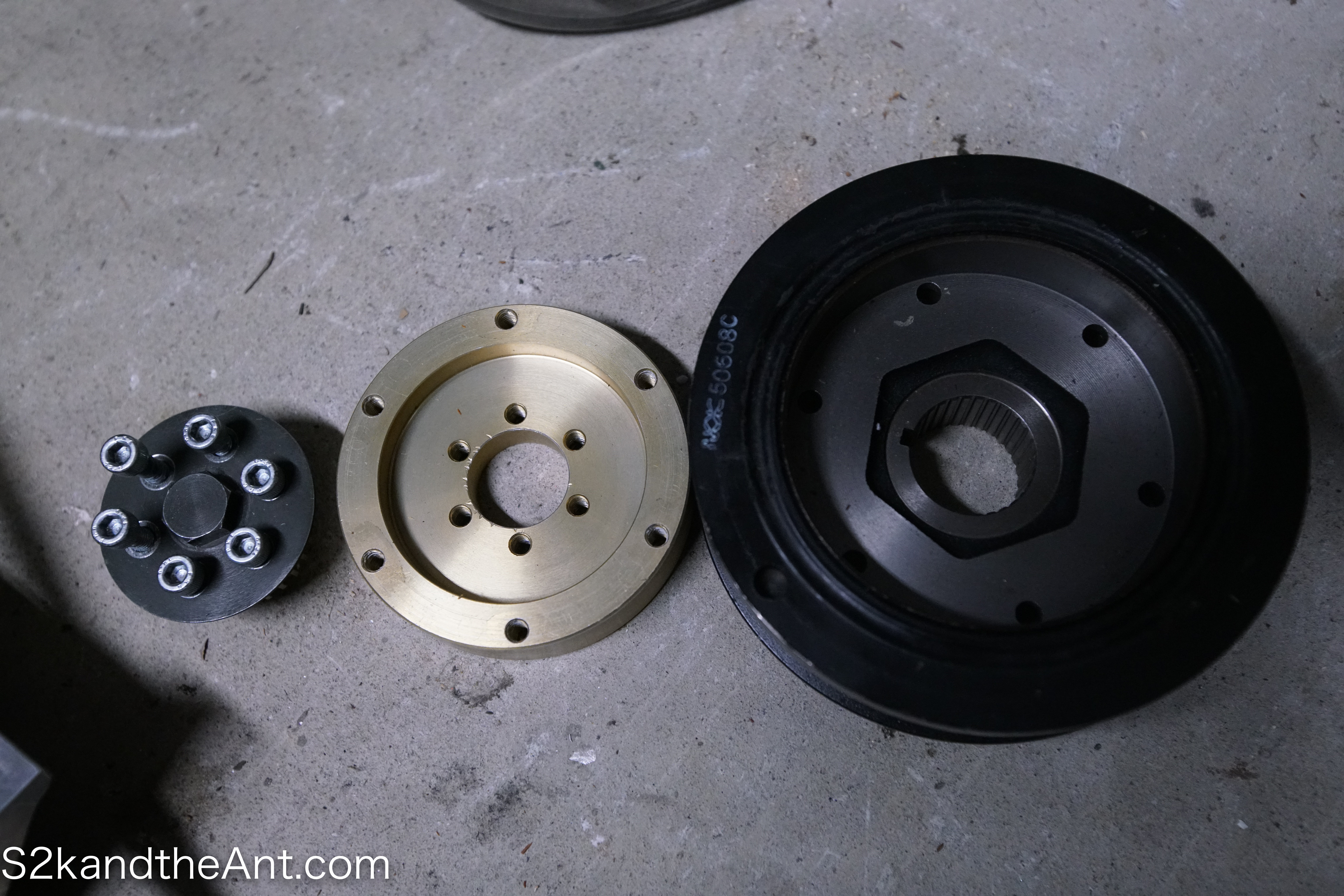 Here is the Crank pulley exploded. You can see how the OEM crank pulley has been machined for dry sump gear. 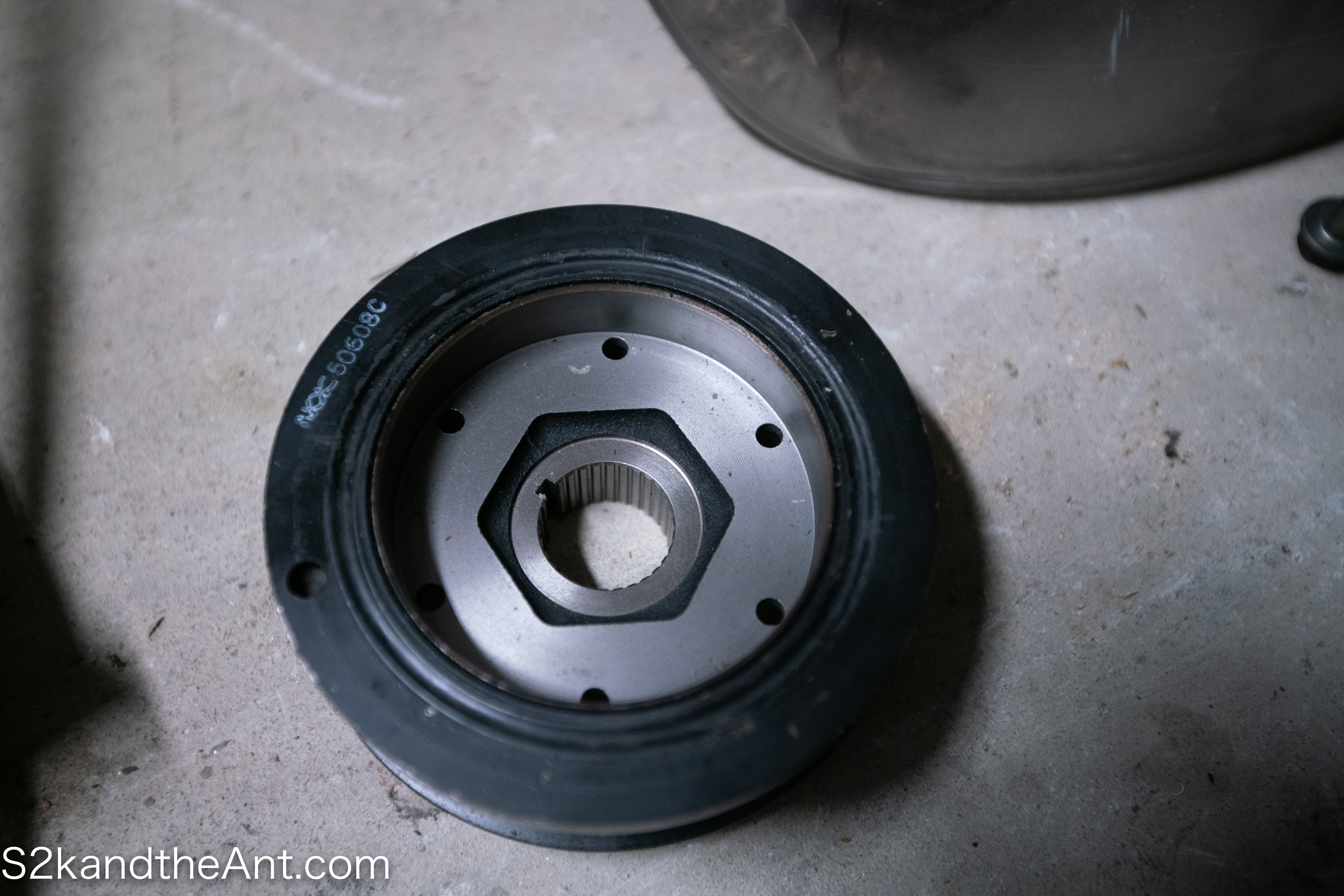 There are bolts that mount from behind the crank pulley to mount the inner piece. Don’t forget to put your crank pulley bolt in before you bolt the piece in! 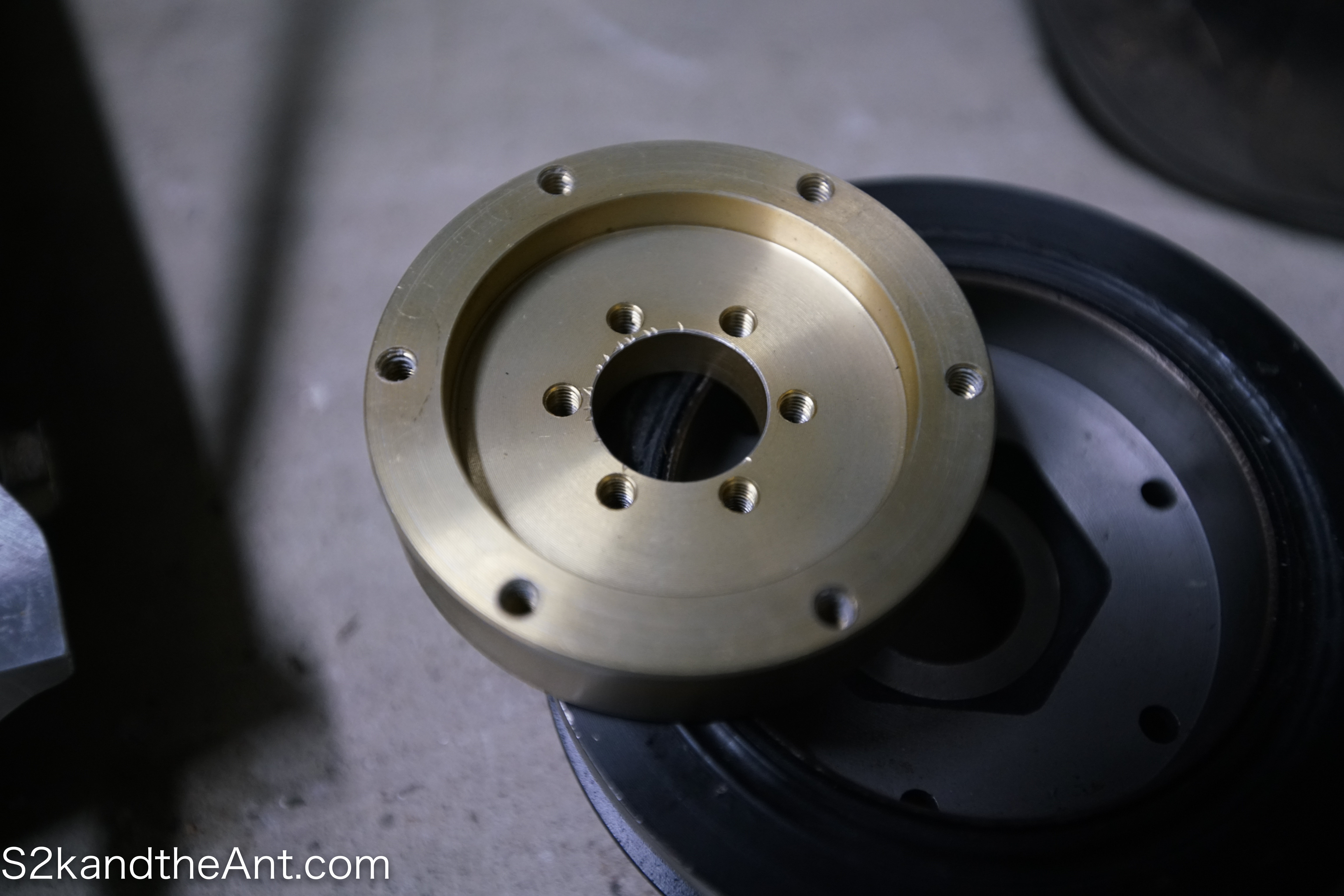 The rear, you can see all the holes where it bolts into the crank pulley 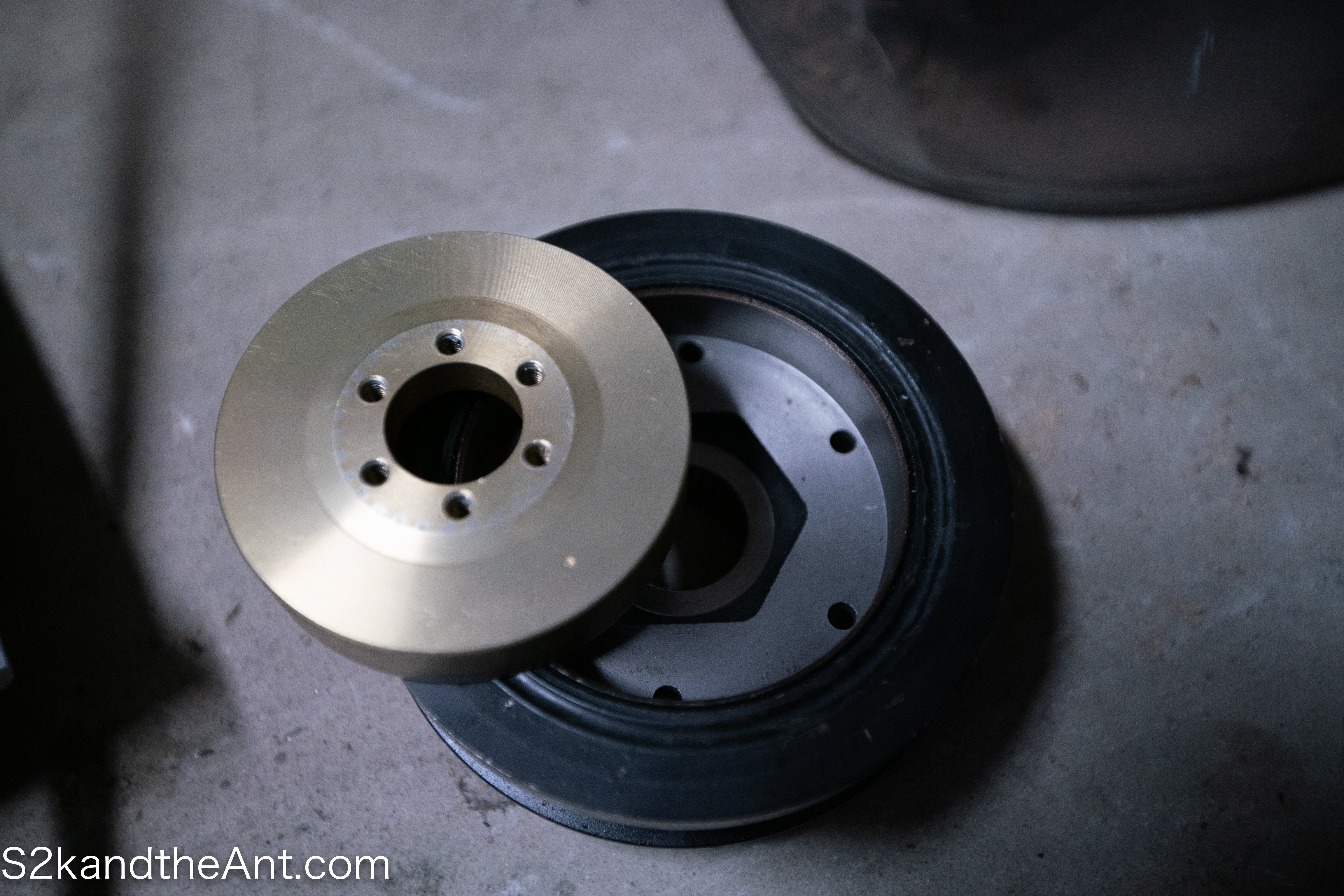 The front where the dry sump gear is mounted. 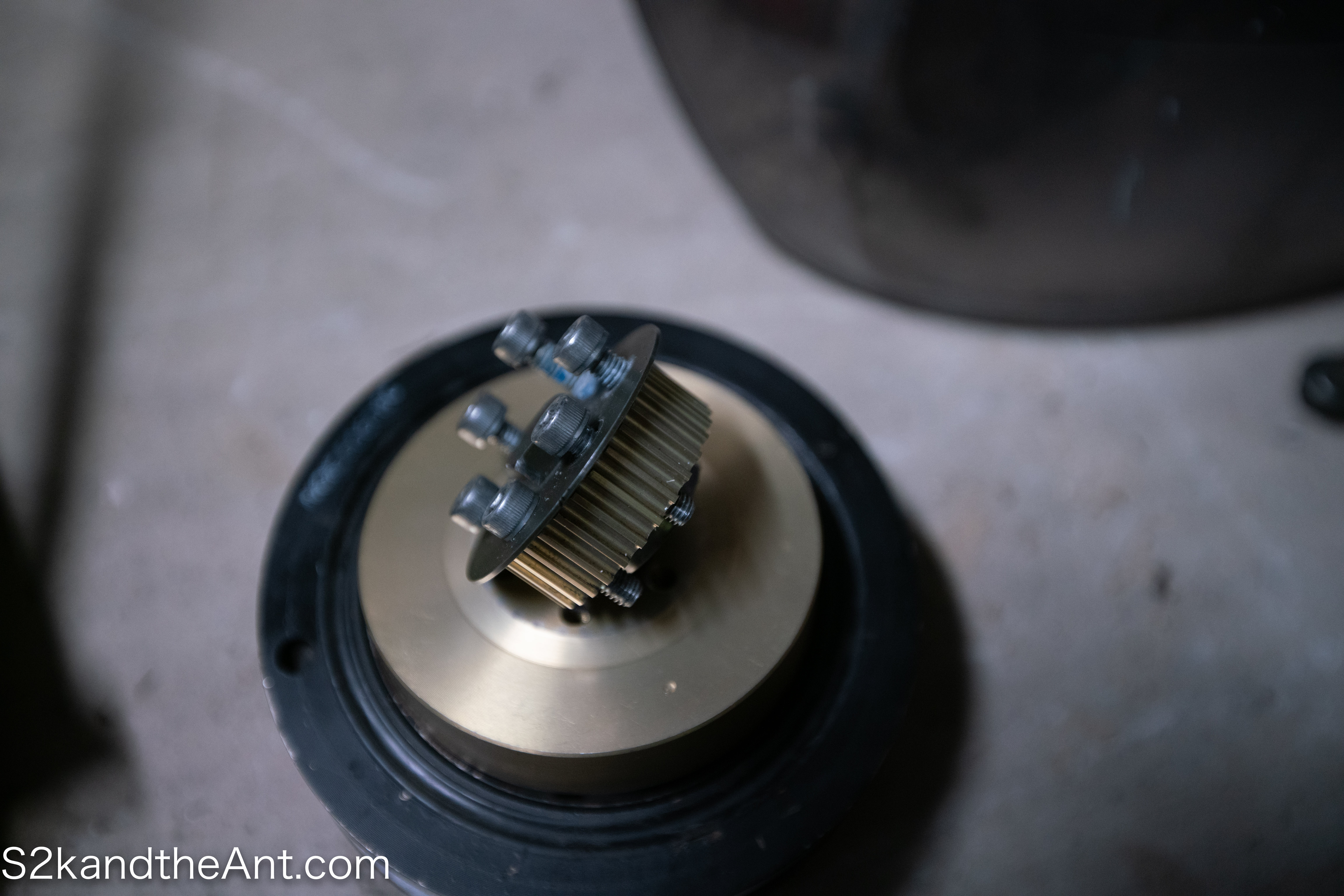 Mounted with the belt on…. 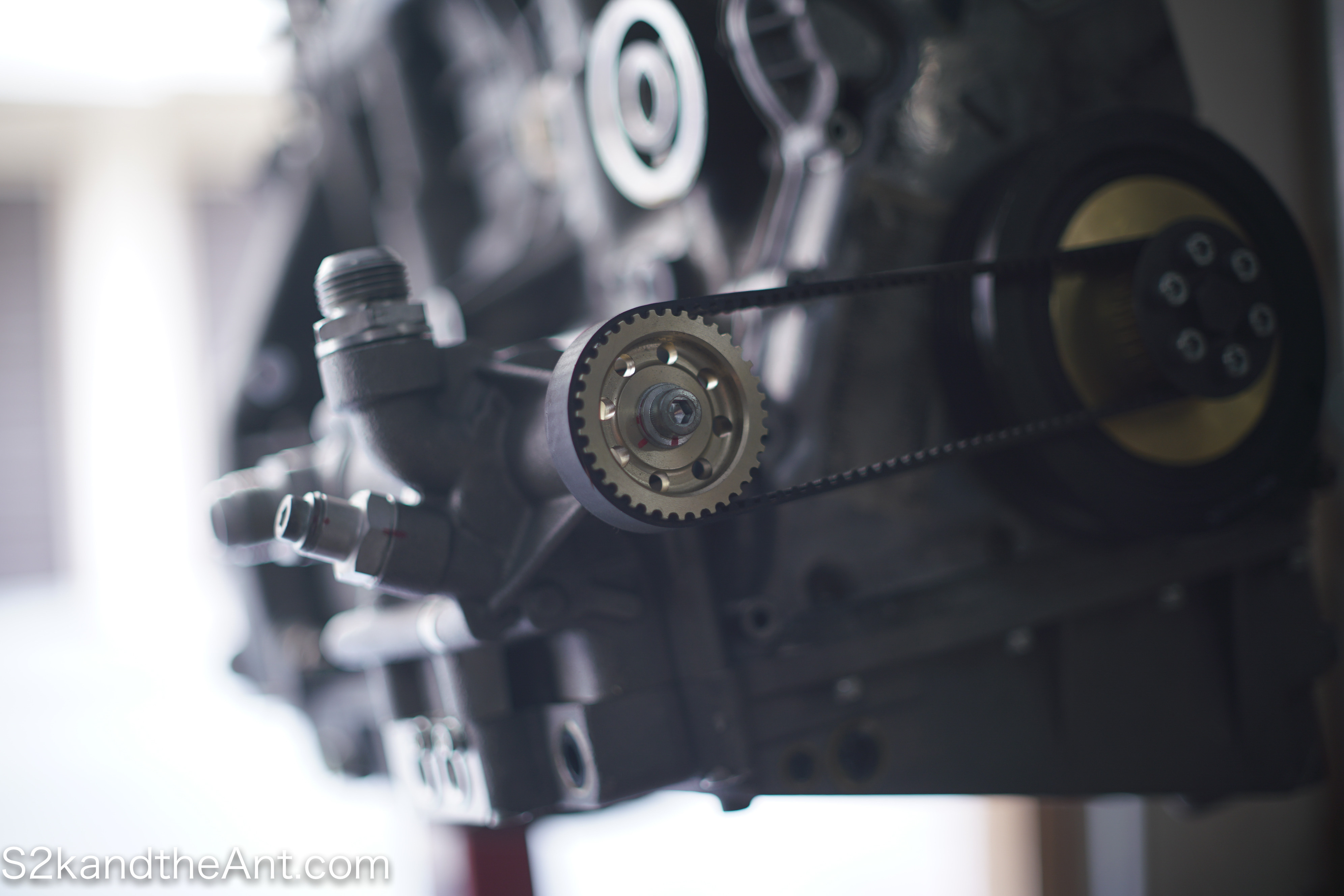 You can see how the belt runs the pump here. From what I can tell, most of the other dry sump units that toda racing produces also runs this very pump. If you were to look at their bespoke K20 Formula 4 engines or Super GT engines they all use this type of pump…. I don’t know what hole is oil-in and what hole is oil-out yet. These are things I need to figure out. 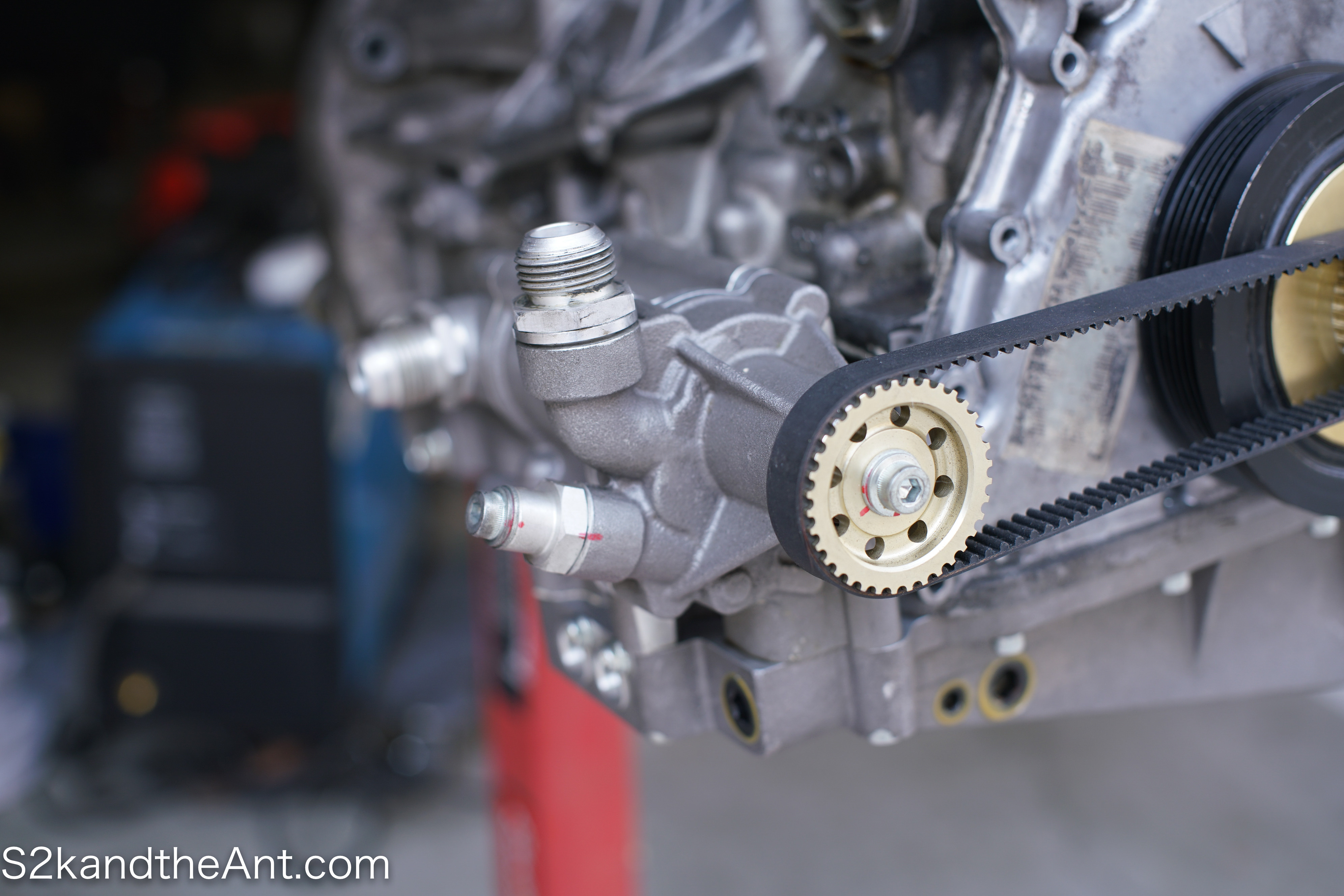 All the bolt holes underneath the pump I have no idea what they do. 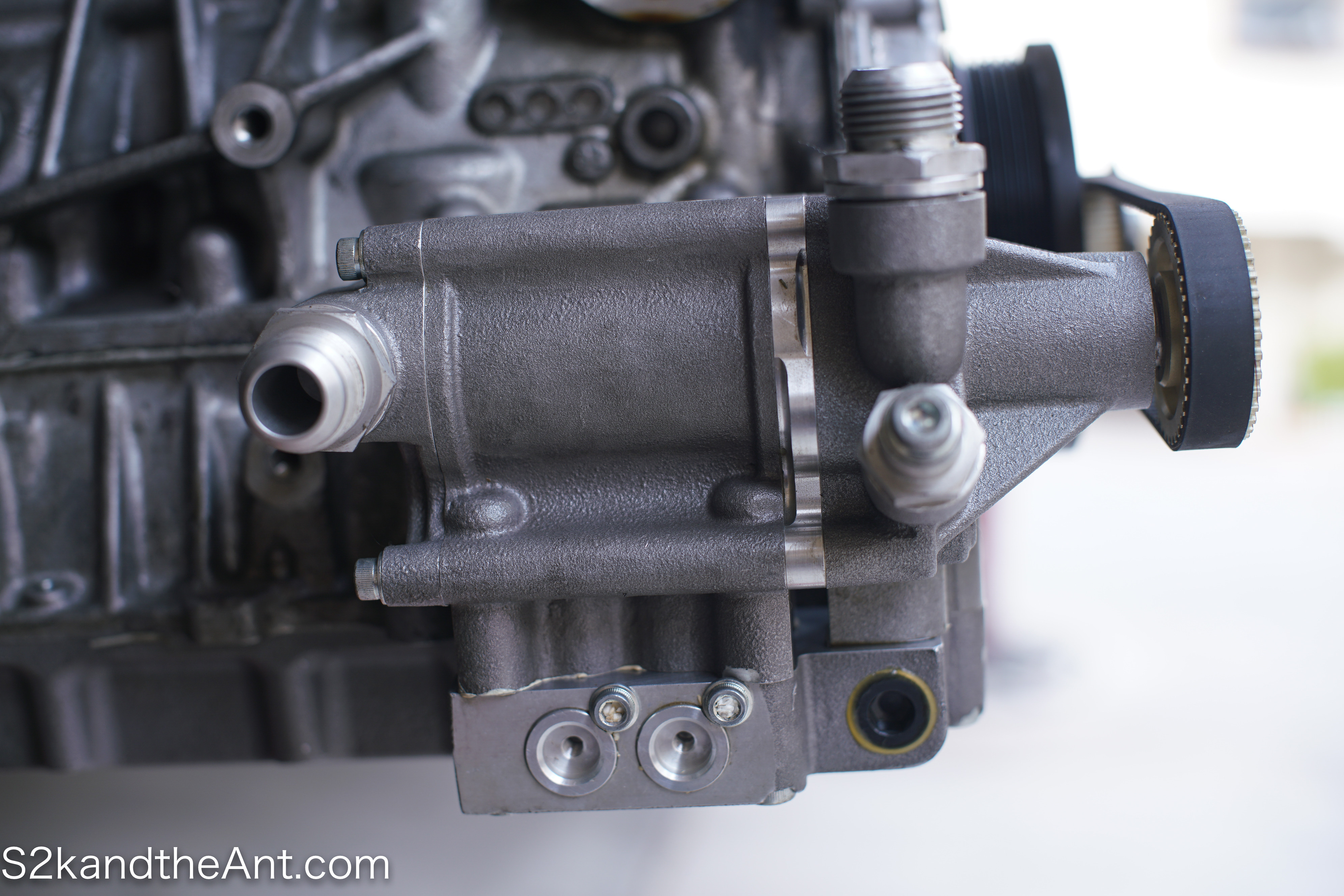 From the pictures of the few cars that run this online, those holes below are unused. 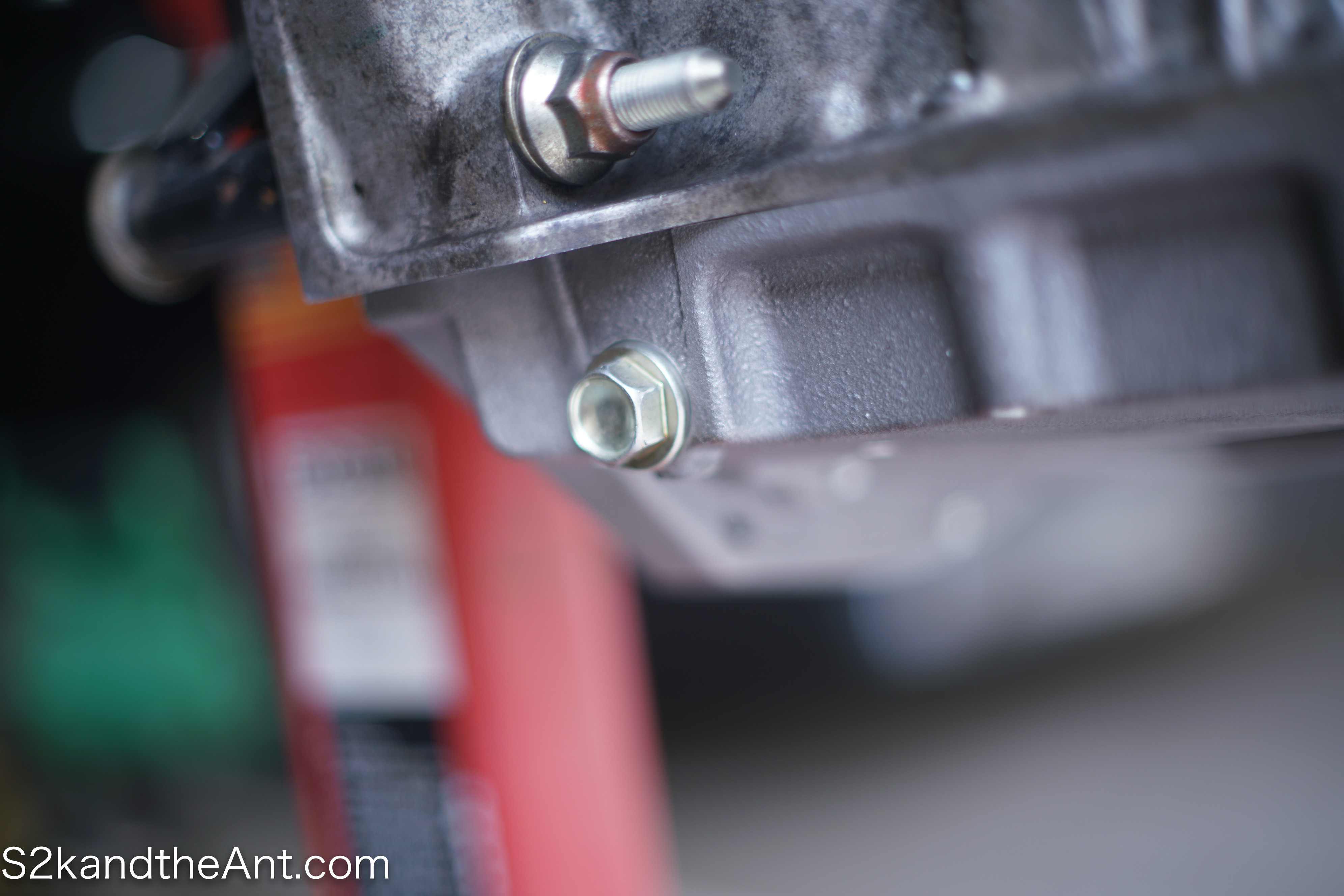 If we turn our attention to the oil drain bolt towards the rear of the pain, it is the same bolt used in the OEM oil pan. I love how they retained this and did not change the bolt to a different size or pitch.  They are two oil drain bolts to drain oil from the “pan.” 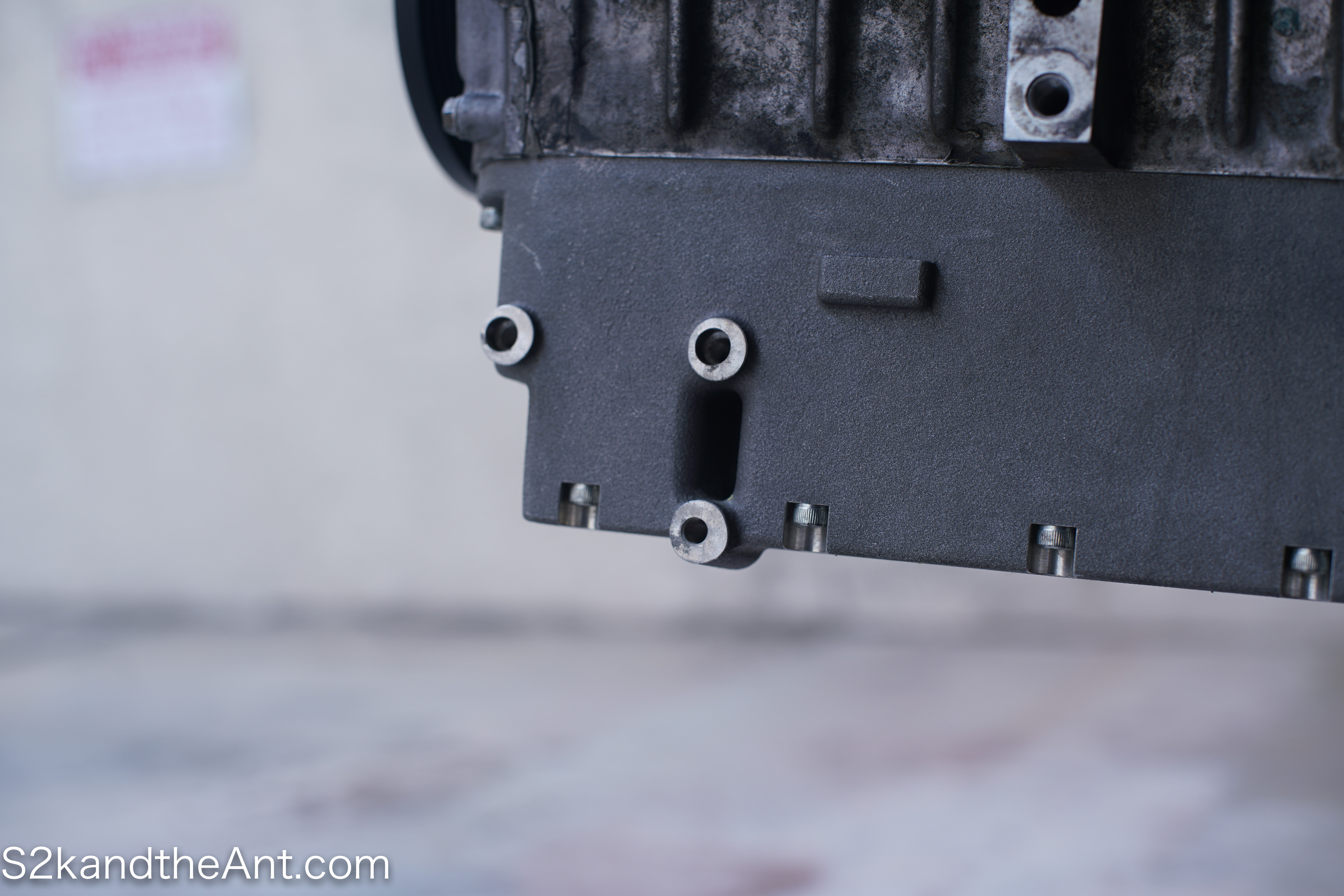 What’s these 3 holes here? This is why I think this is great for a street car. No other Dry Sump Kit manufacture for the F20c has these bolt holes. This is where the bracket for the OEM AC Compressor goes. So in Theory you can run AC with this! I’m not gonna play race car driver, I love having AC in my S2k as it gets very hot in the summer, and I’m all about the hardtop 24/7 life. 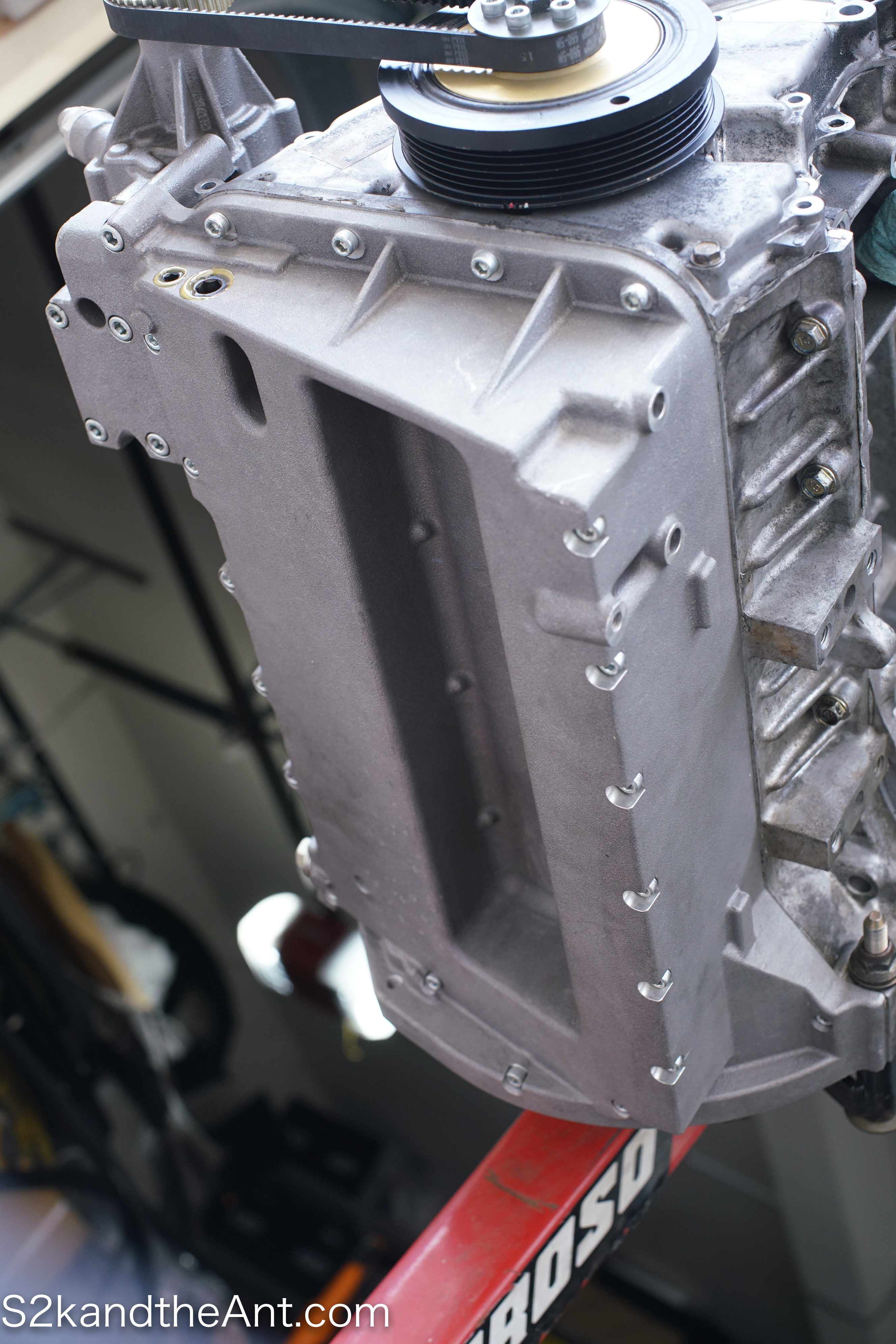 If we look at the bottom of the Dry Sump pan you can see the separate sections this pan has. Another cool things to note, This Toda Racing Dry Sump Unit is casted from magnesium. Yes, this might weigh more than other kits out in the market but I feel like this is the most thoroughly thought out kit out there, shy of like IF HPD make a dry sump kit for this like how they do for the K series, where the dry sump pump is ran off of the internal oil pump chain…… Maybe AT power would make something like that if there is enough demand? 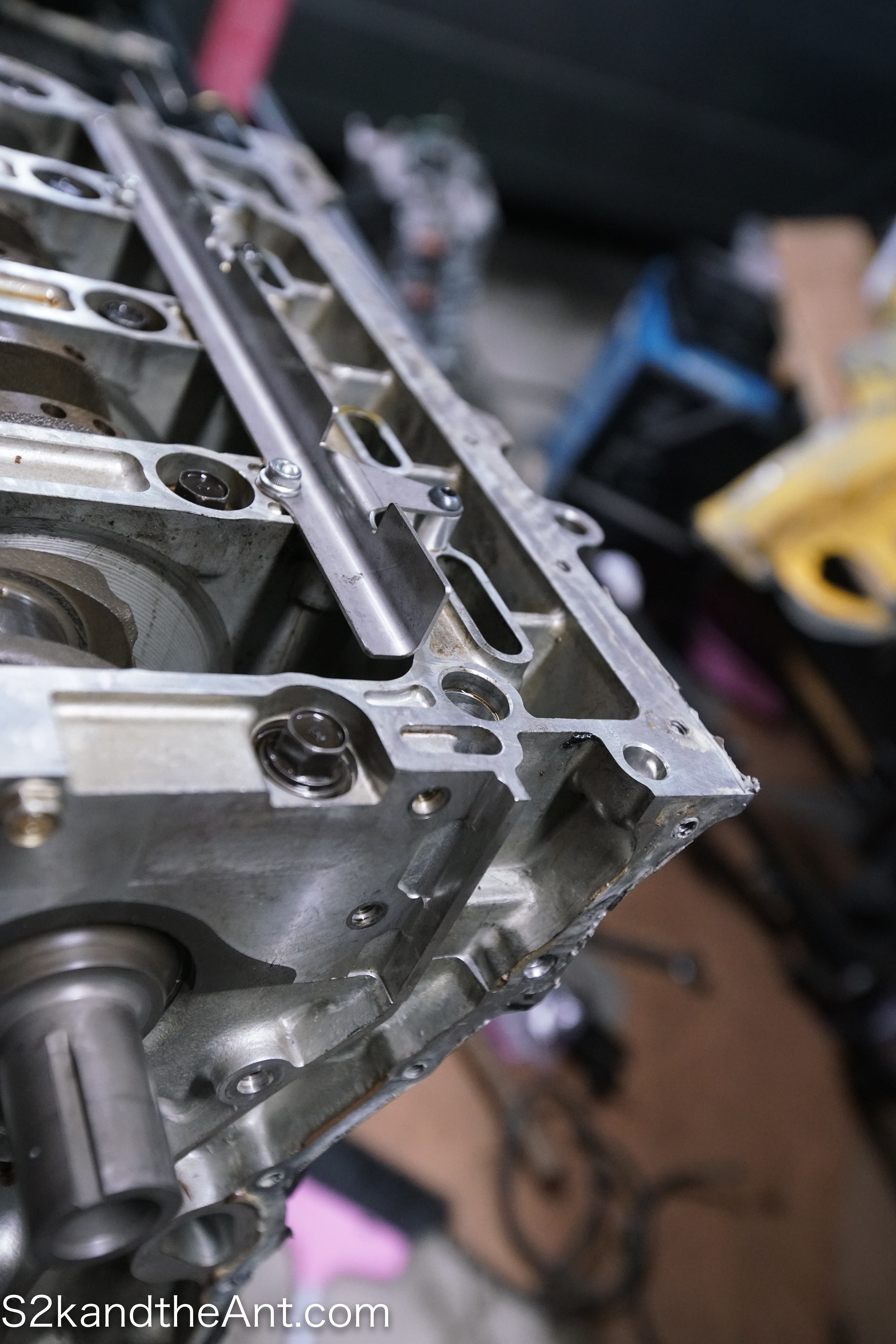 Turning out attention to inside the engine.  This plate is mounted to the block to divert the oil to the new sump. 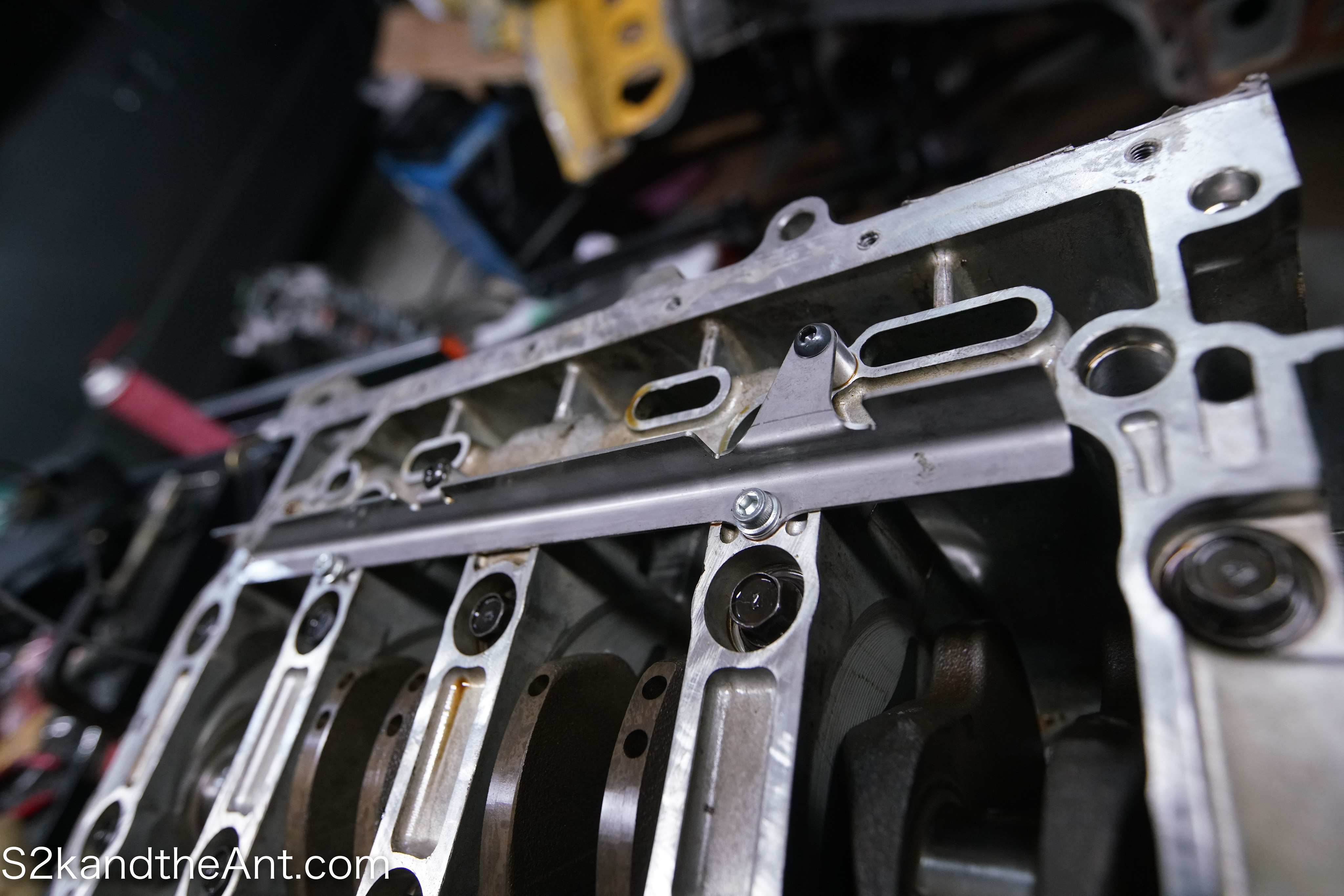 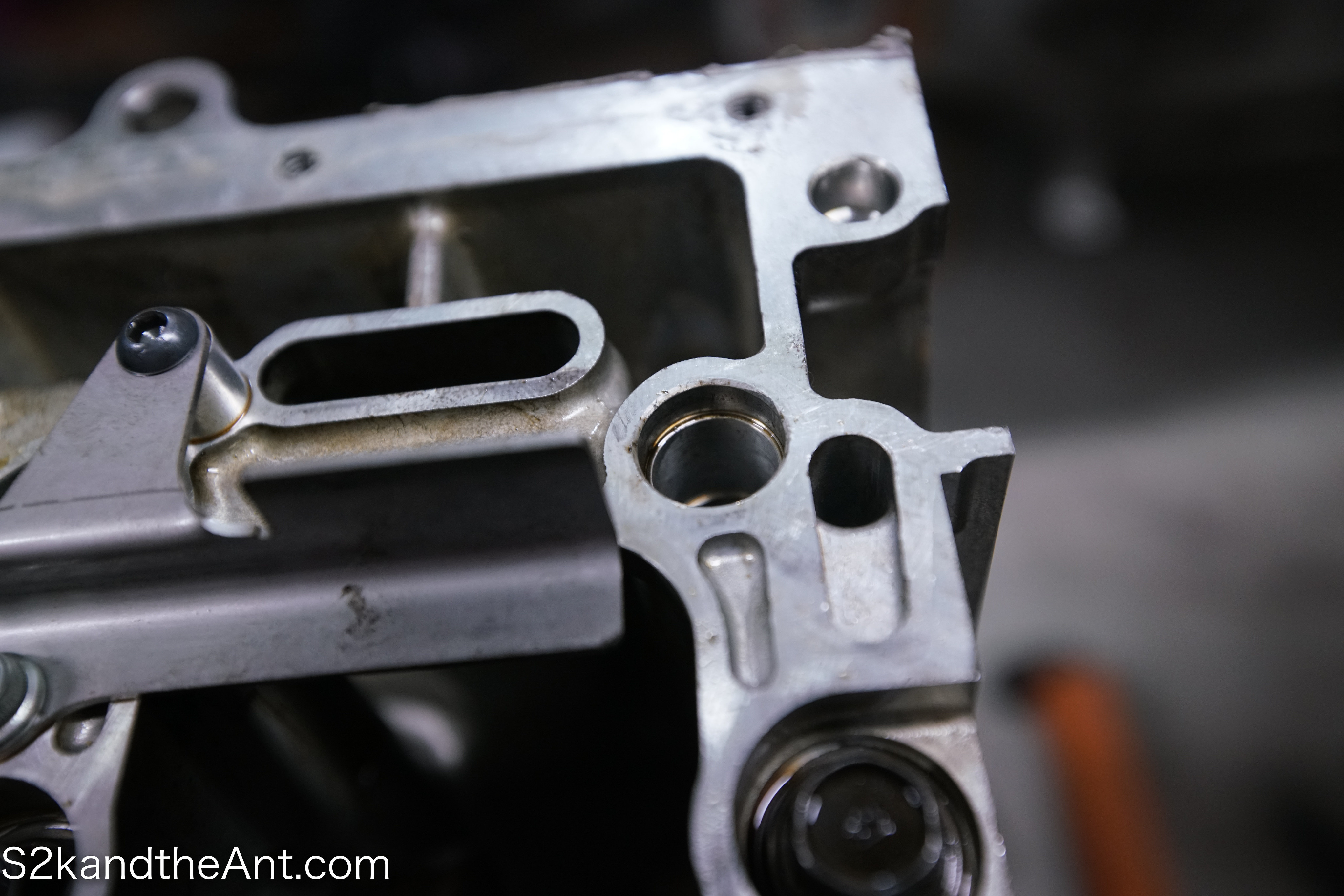 So what’s that hole right there.  That hole is where the OEM Oil pump would pump oil to, if you were to follow that hole up the engine, you would end up at the oil filter….So that is another super super cool thing about this kit.  YOU CAN RETAIN YOUR OIL FILTER LOCATION! Yep, no need to remote mount your oil filter to run it inline like the other kits on the market.  See I told you this was extremely thought out. 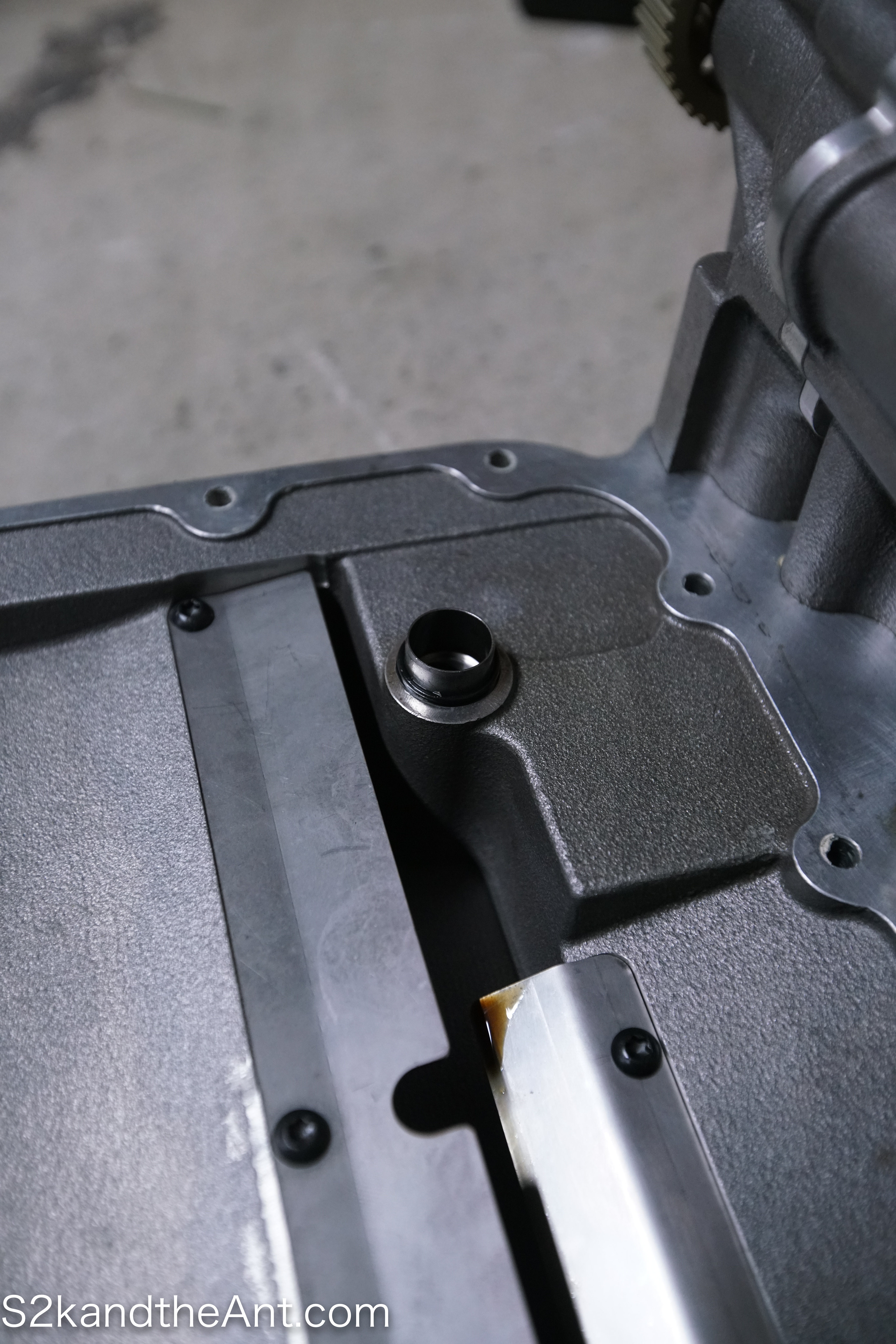 O-ring on the dry sump I should replace…. 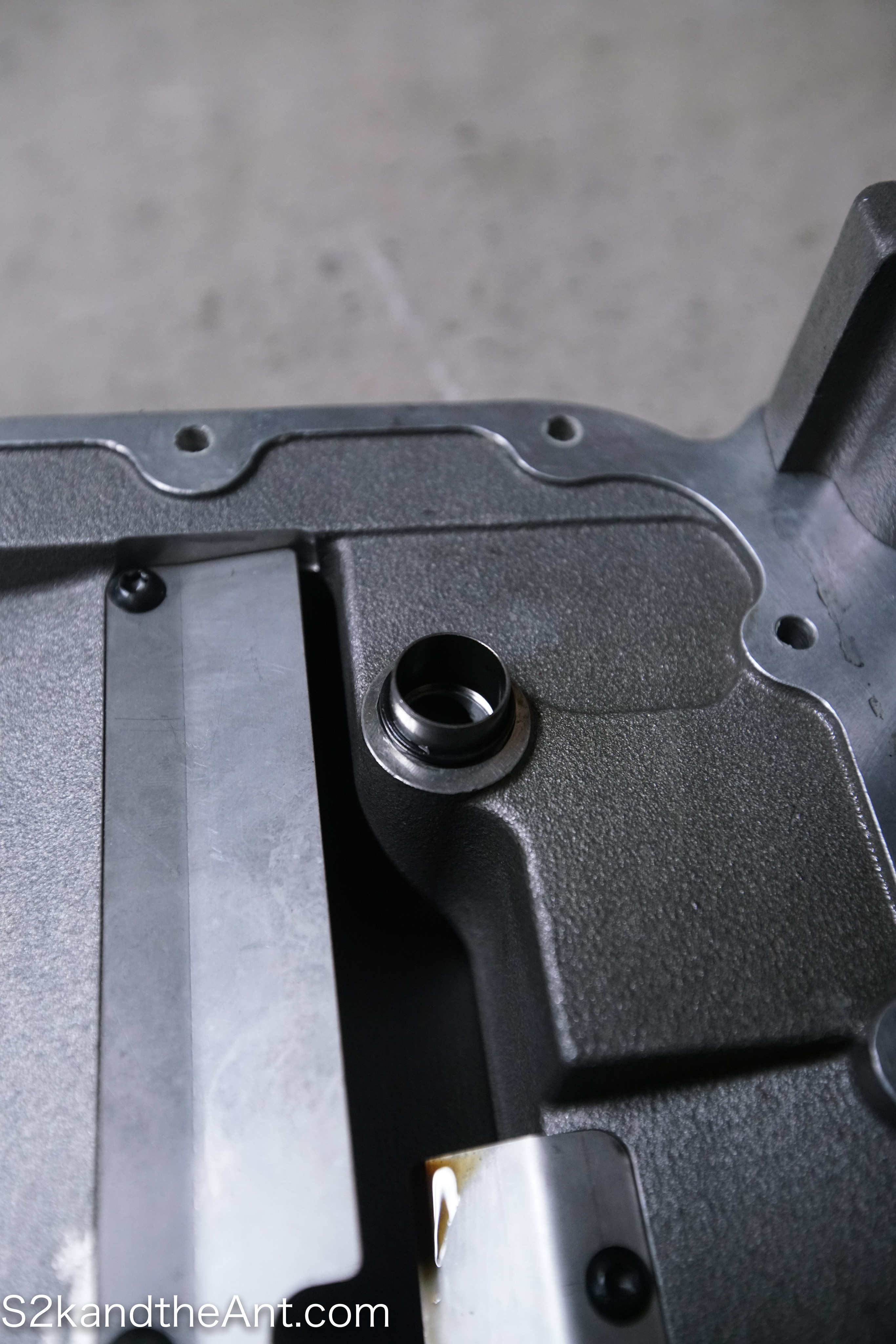 This is why I can use the OEM Oil filter location, how cool is that! 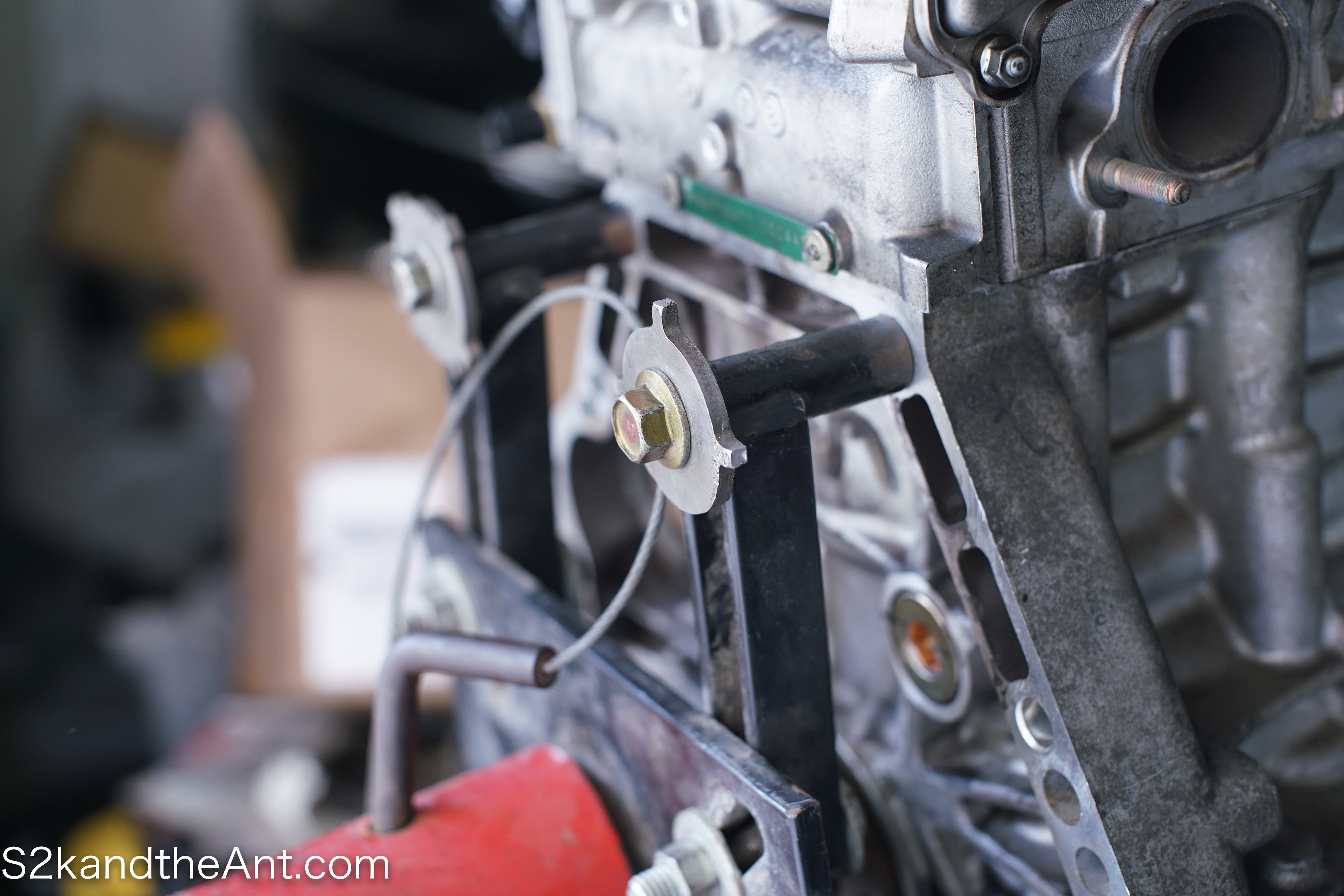 I needed some washers to mount the engine, so I found these cam trigger gears…. apparently they are discontinued and I shouldn’t be using it like this… 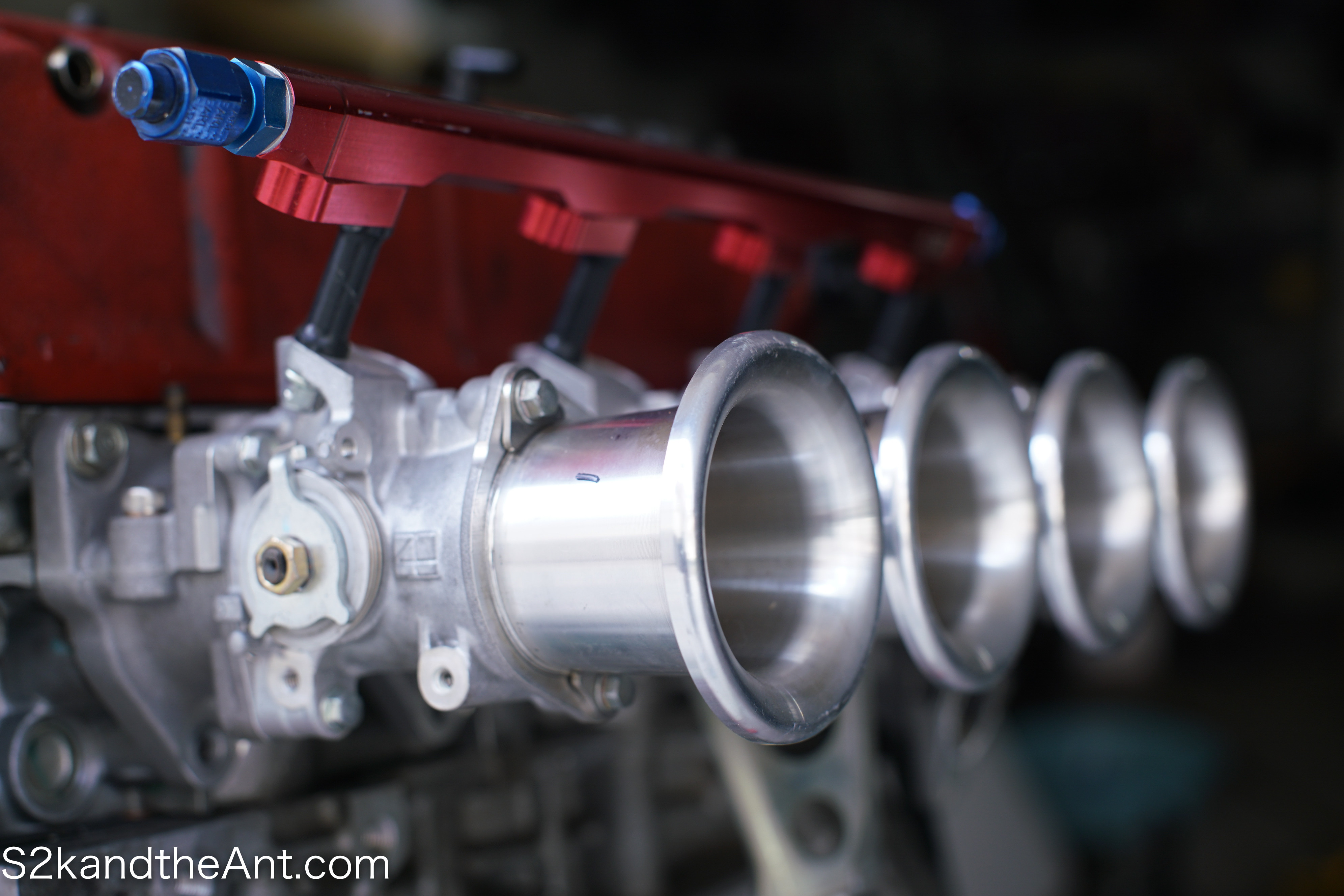 Toda ITBS looking pretty.  I made a post why these are rad…  Here 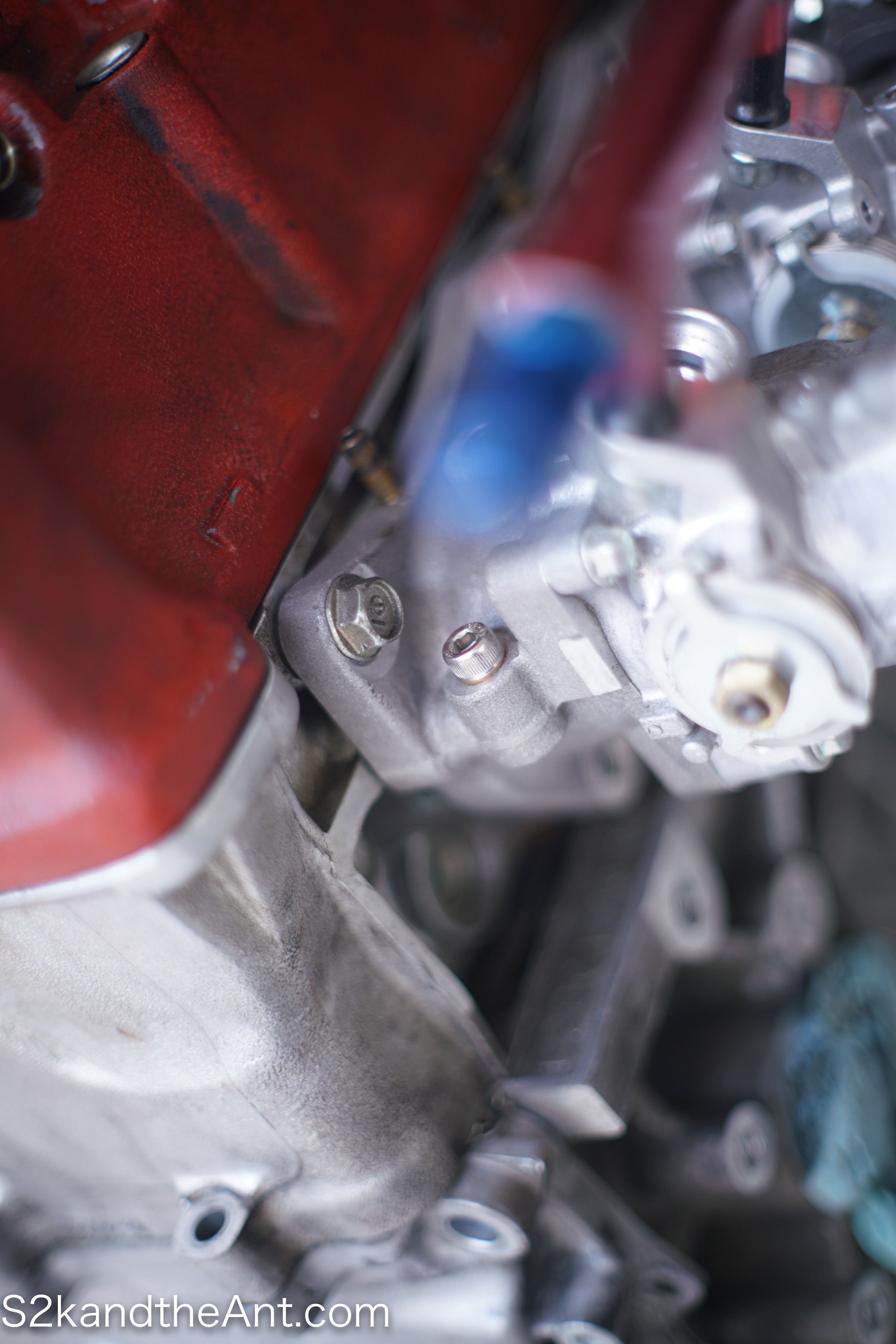 That’s it guys, hopefully you enjoyed the in depth look of the Toda Racing Dry Sump kit for the F20C / S2000.  I really wish there was something like this when I was searching.  There is seriously nothing out there.  Now my new issue, how the hell do I mount a dry sump tank in my car, I don’t want to put it in the trunk nor do I want to put it at the passenger footwell.  I don’t even know what size tank to buy…. that’s for me to find out.. Hopefully running by 2030 haha.