Being in Southern California and being a car enthusiast is awesome! I can’t say that enough, I can see how you can eventually become jaded from the car overload…. I’ve been cutting down on car events to keep things fresh and we just bought a house, so we’ve been busy fixing it up. When I heard Ichishima san, the SPOON Sports CEO was going to be at GoTuning, aka Spoon Sports USA, I knew I couldn’t miss it. I’m not the biggest spoon fan, but I respect their philosophy, a minimal approach to car tuning, just slightly augmenting the factory fundamentals to retain total balance over outright power….. 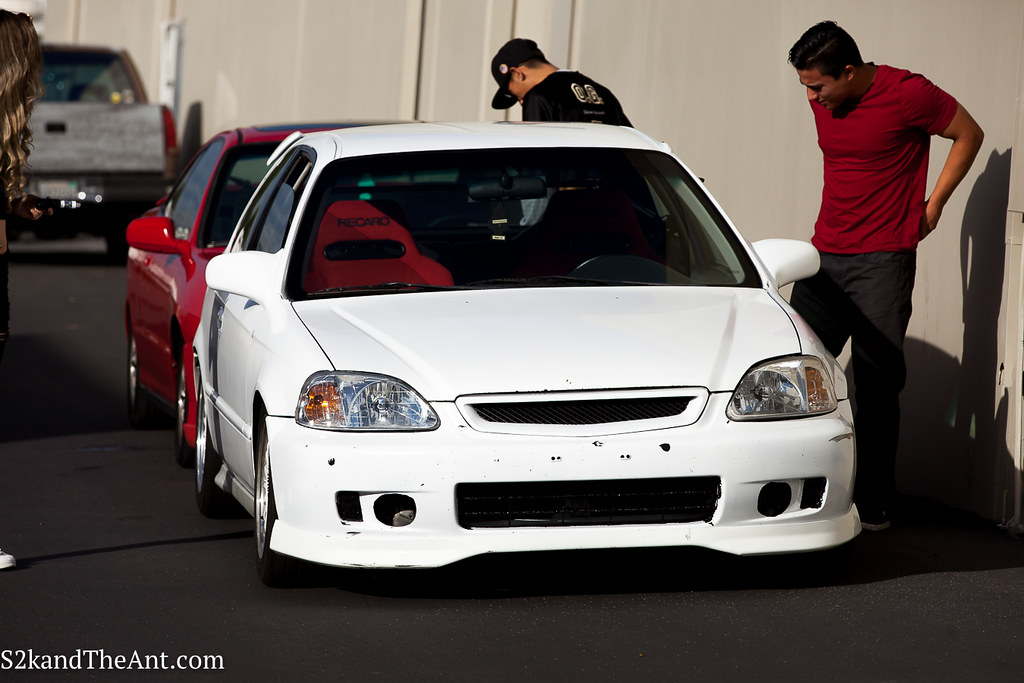 The event was posted all over social media, Upon arrival at GoTuning, Ichishima was not there yet, but people were still rolling in, like this EK.  I’ve always like the body style of the EK. I remember a few years ago, my dad had an EG, EK, and EF at the same time, all hatchbacks.  He let me choose one for a daily driver, in the end I picked the EG since it was the most raw with a stick shift, hand crank windows, and no moonroof, and the EF was auto 😦 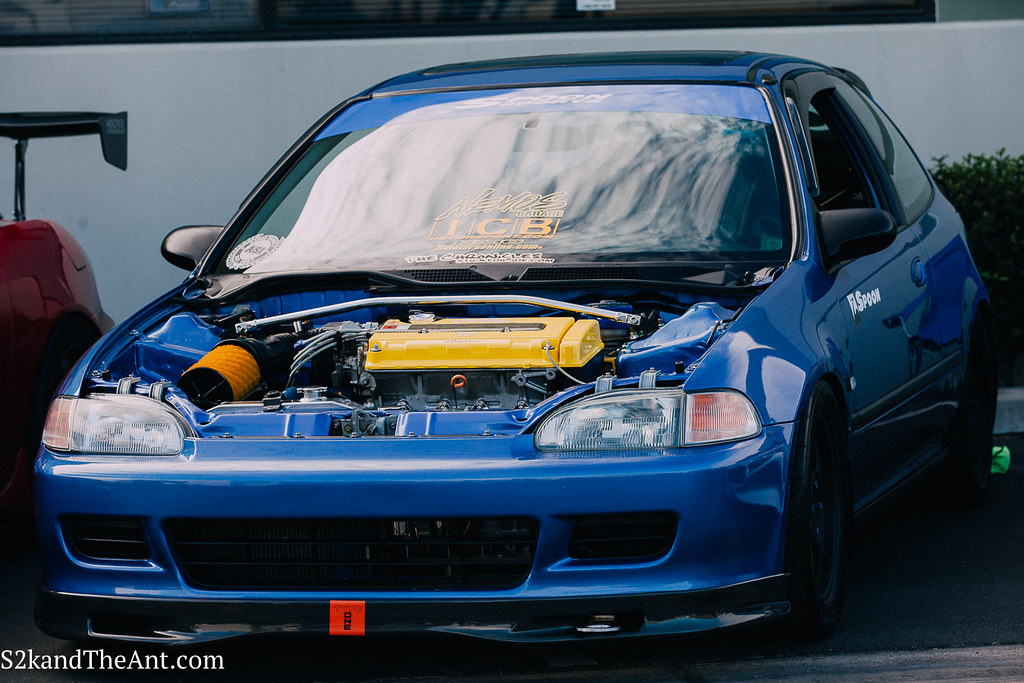 This brought out a lot of Spoon fans.  Like this beautiful Spoon’ed out EG.  He had almost the entire spoon catalogue on his car, but the damn Mishimoto radiator keep bothering me…….I love the blue and black theme. 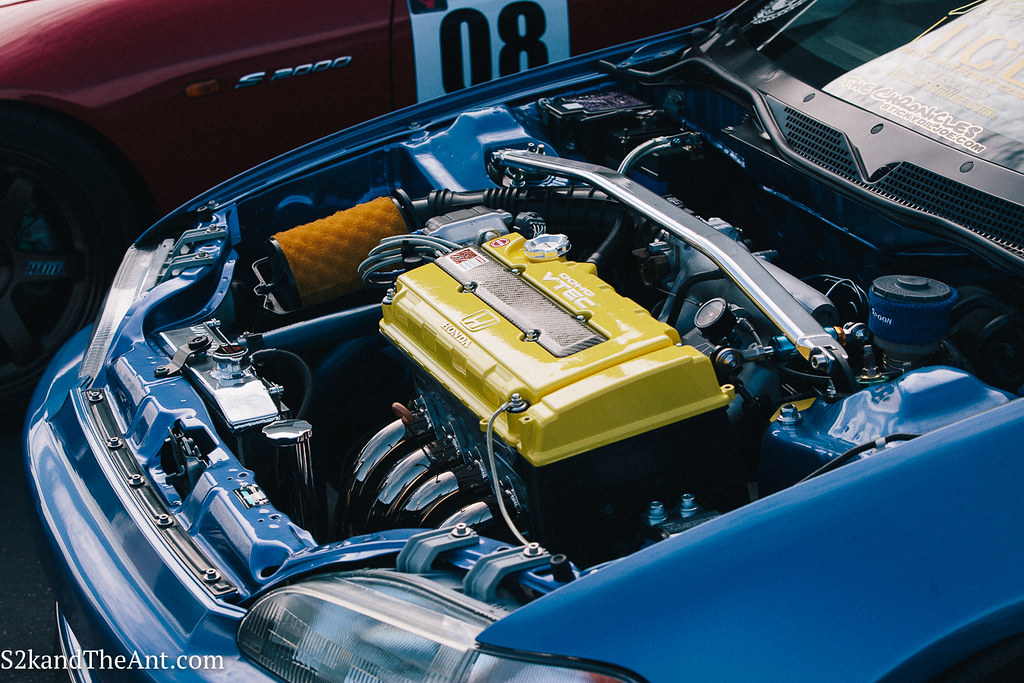 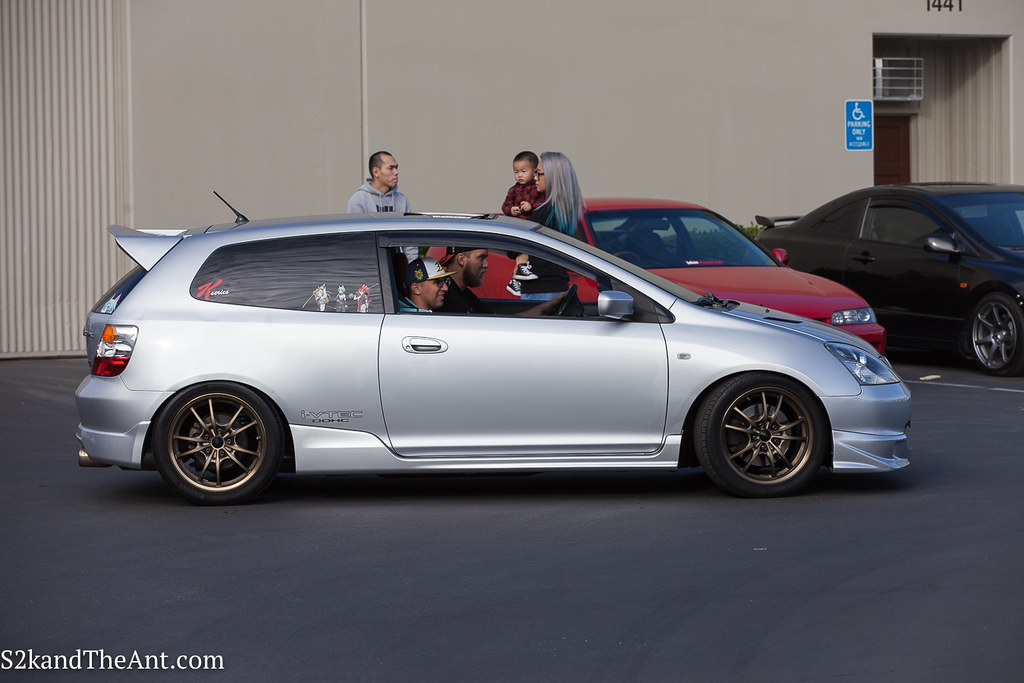 More cool cars were rolling in, like this Mugen themed EP3 with MF10s…. funny thing about MF10s, KingMotorsports just released a re-run of Mugen MF10 yesterday, everyone and their mother has been trying to sell their used set, probably hoping to buy a brand new in box set.  King lets you buy per wheels so those guys that bought 2 sets of NSX fitment wheels for the rear wheels for over $7k+ definitely got screwed!  I think the group buy is over now……..too rich for my blood. 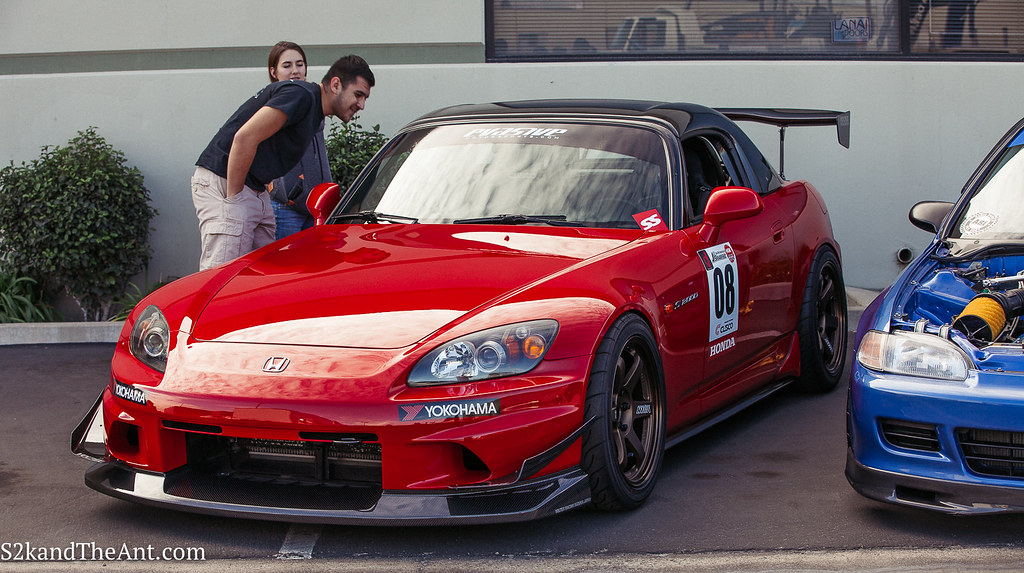 Hector Lavario’s Voltex themed S2k with quality authentic parts.  I really like the Volk TE37s, beats the NT03s he had before! 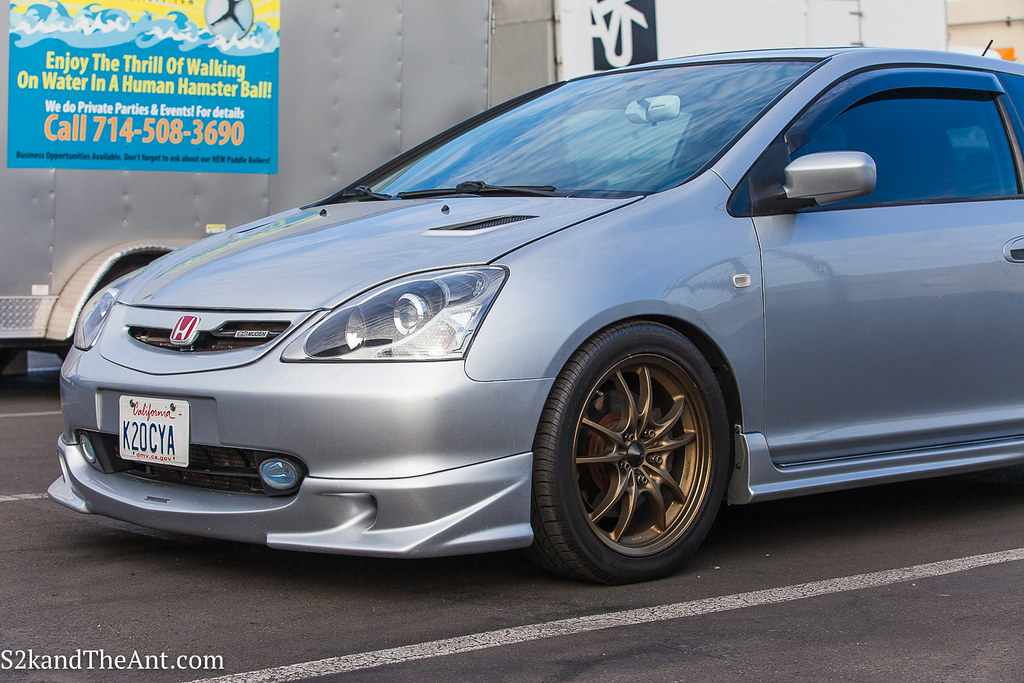 Took a closer look at the EP3 running the Mugen kit.  Bronze MF10s on a silver car looks so right. 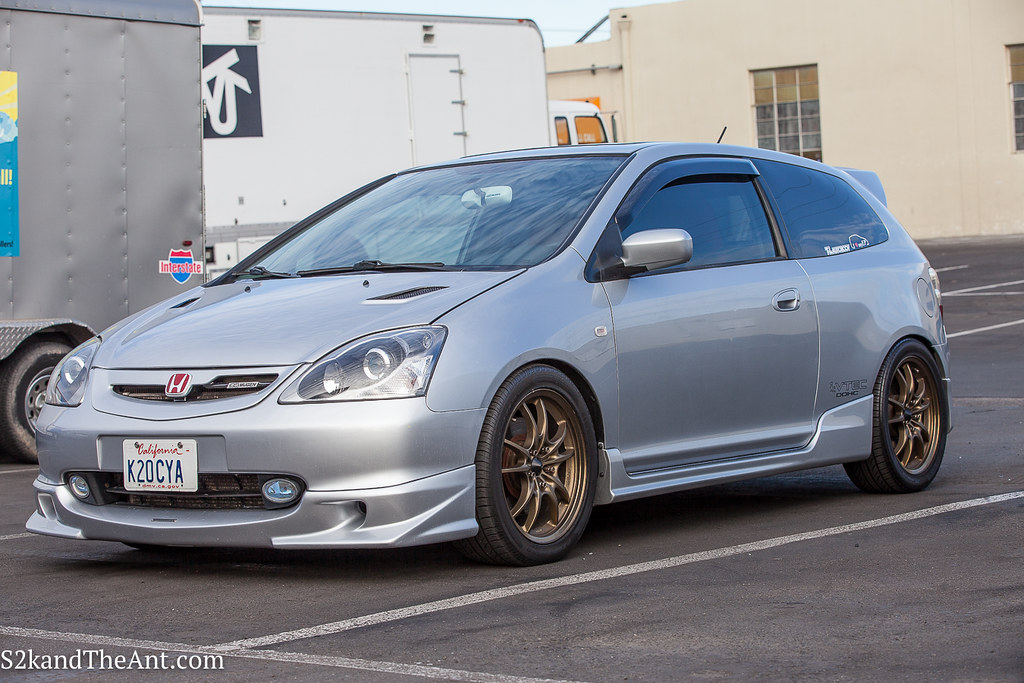 I like seeing properly modded EP3s, this chassis hasn’t seen too much love over the years compared to the other models. 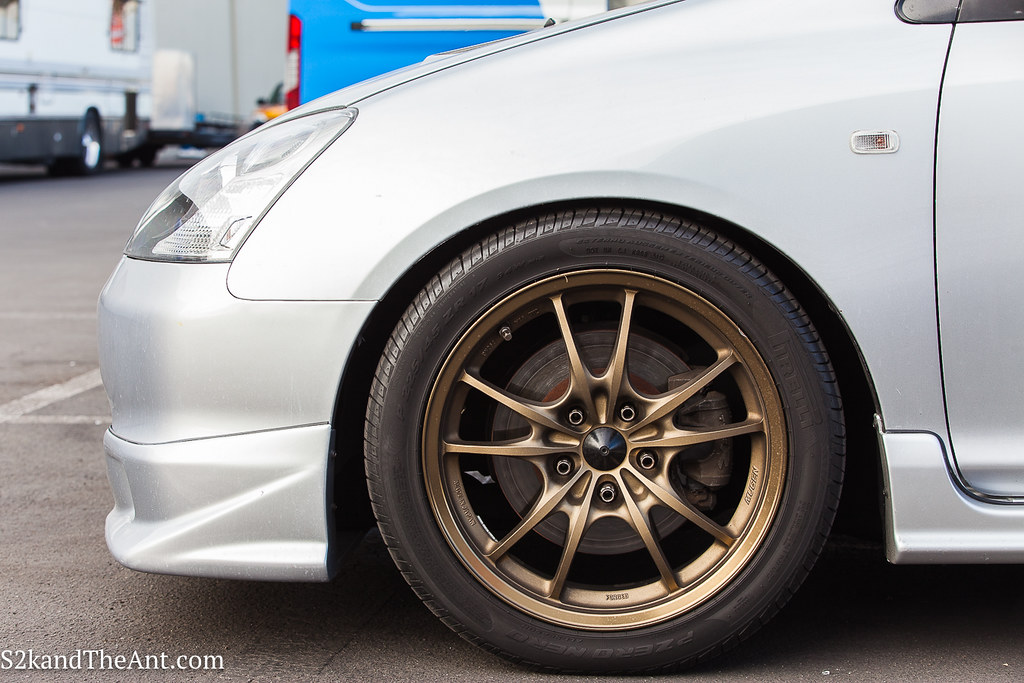 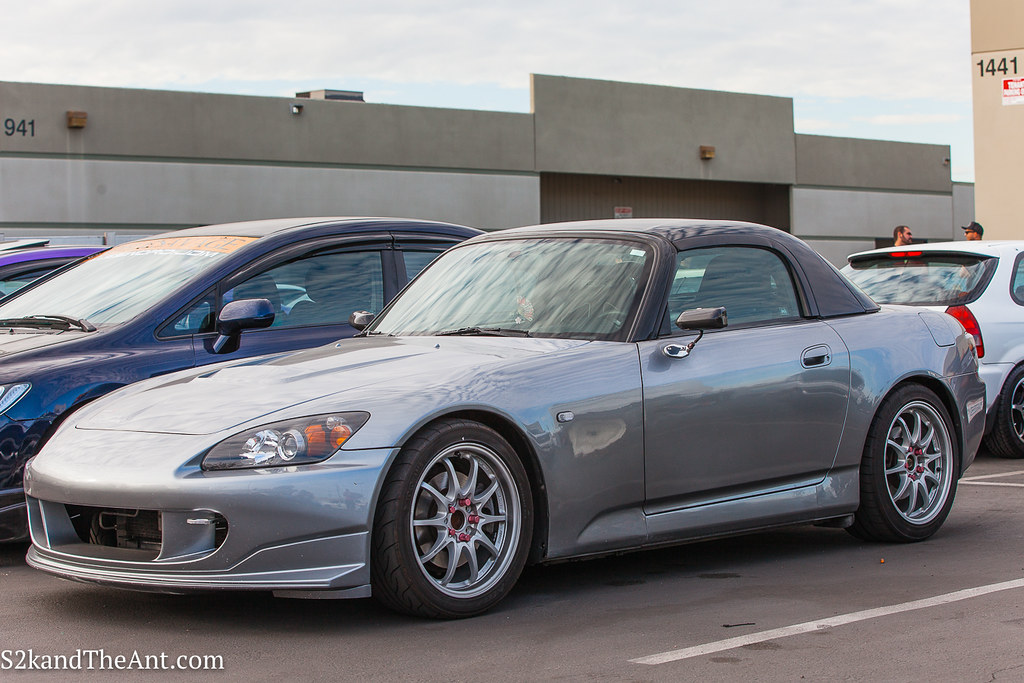 My S2k…. got all sorts of cracks on my bumper and my hardtop is in horrible shape………Anyone want to sell me a daily? 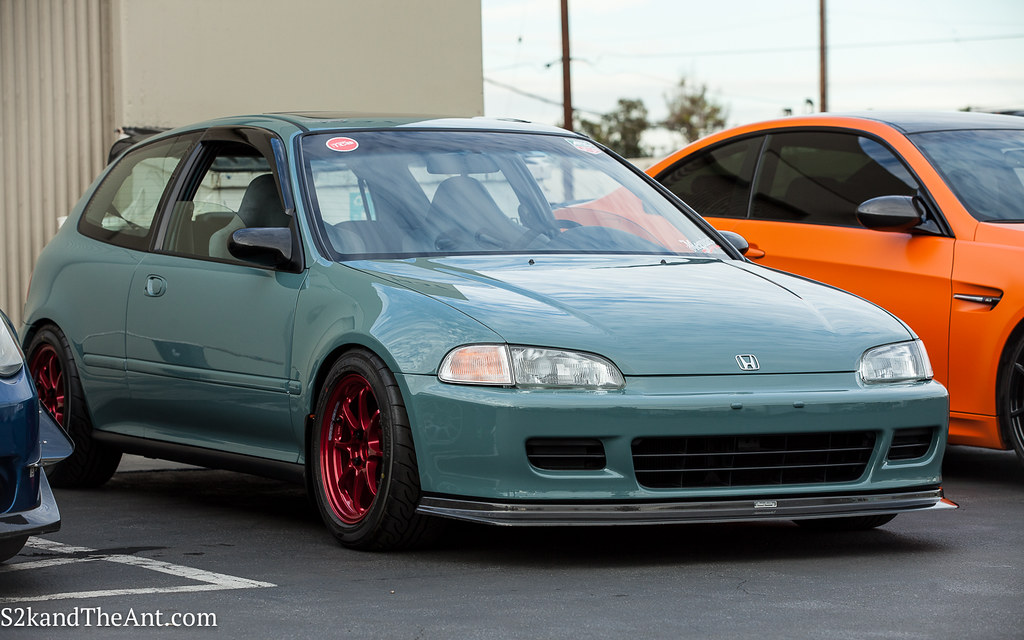 Beautifully restored EG Civic.  I love color and the red anodizing on the CE28Ns.  I overheard heard the owner talk how almost every piece on the car is new….. like a modern day restomod. 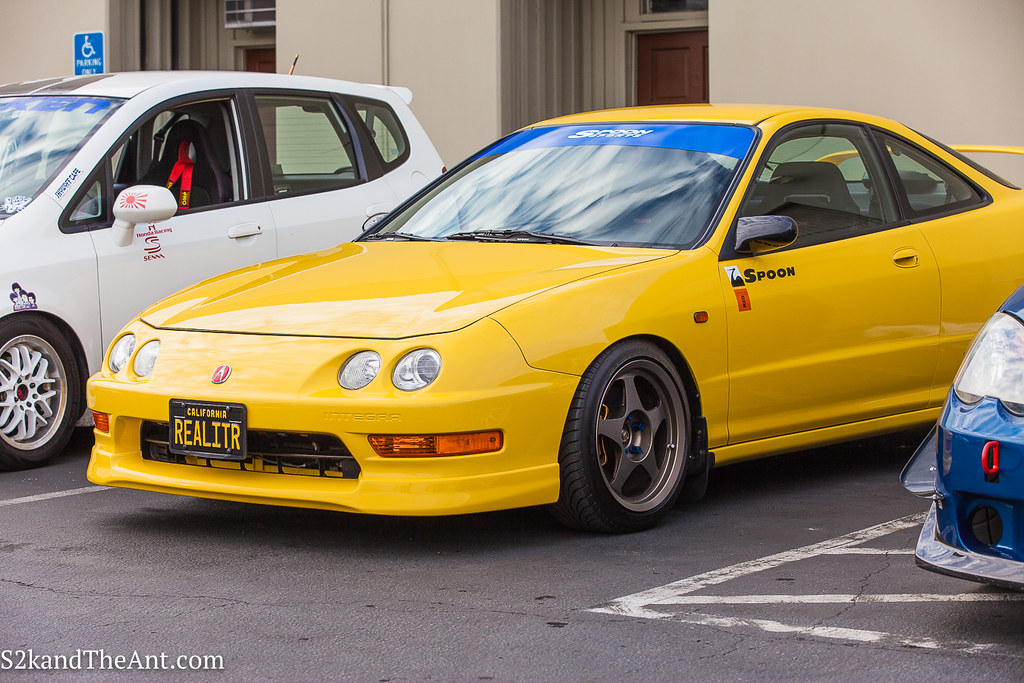 Same ITR I shot at Tech Day awhile back….. He has an instagram too, I can’t remember it off the top of my head right now……. 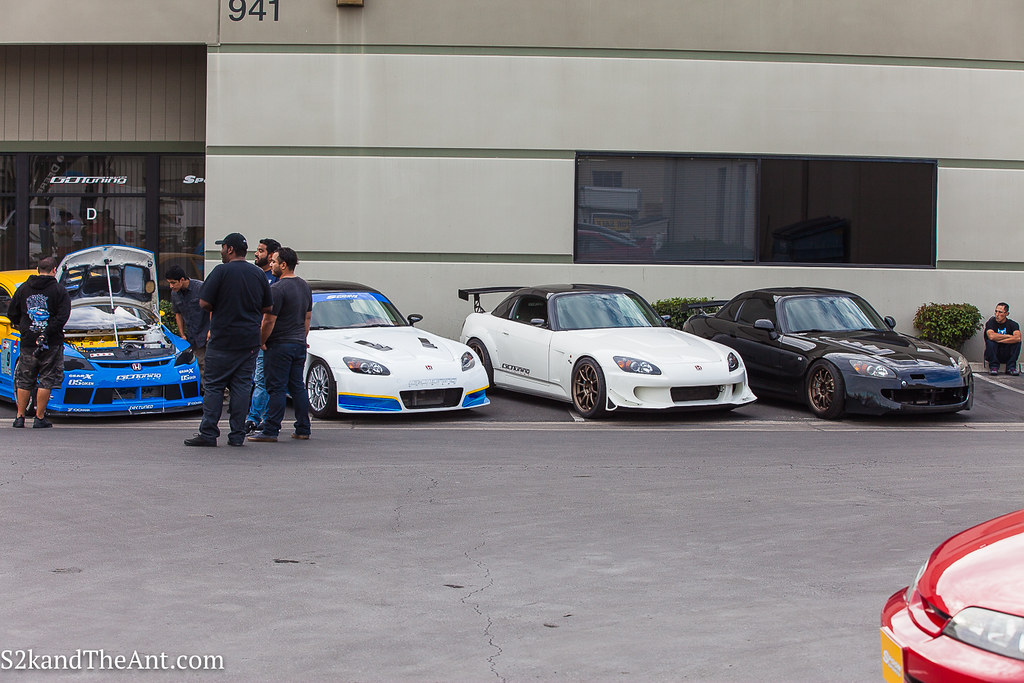 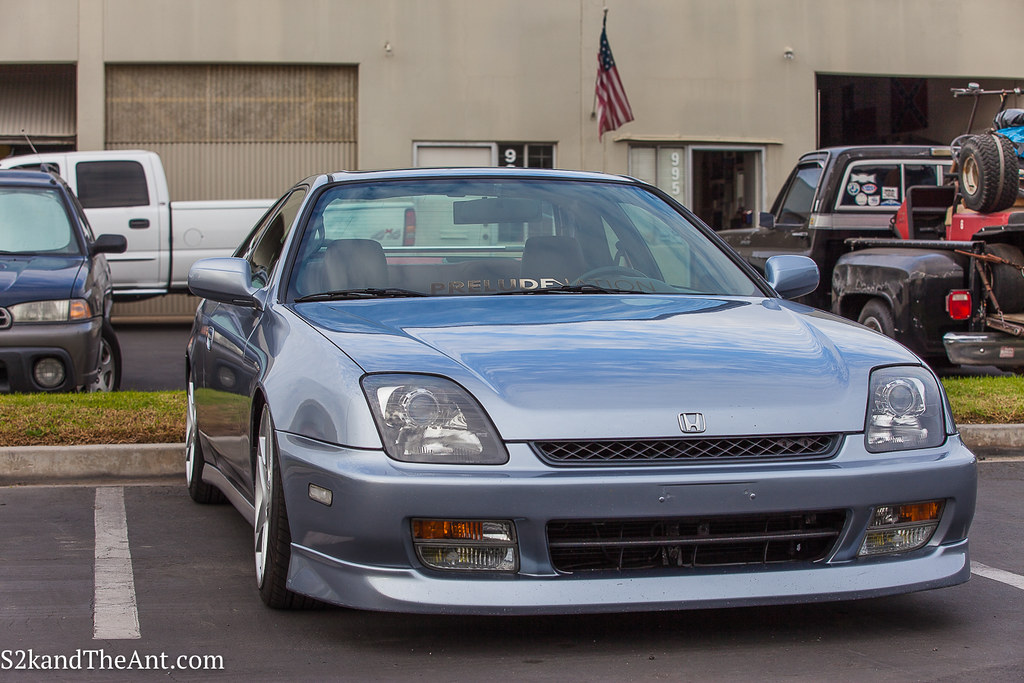 Not in the same parking lot in front of GoTuning, I found this BB6 Prelude in the same complex.  The driver’s side door was bashed in.  This car definitely has some goodies though.  JDM full red interior, HID retrofits, JDM fogs, OEM lip kit, and running TL rims!  I used to have a 5th Gen BB6 back in the day. 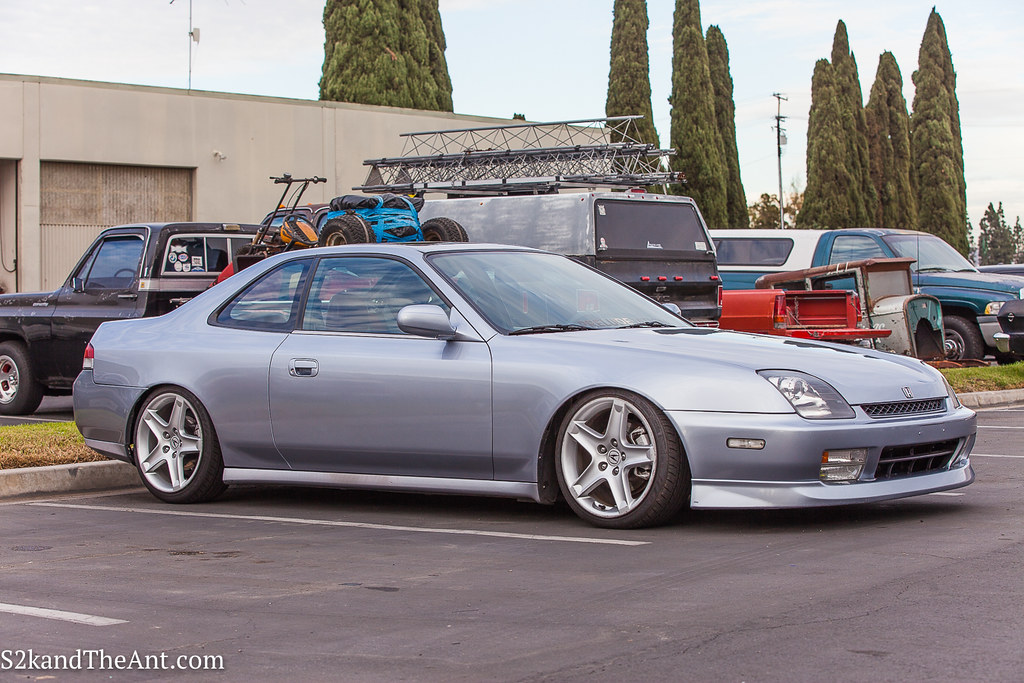 The Calipers look like they’re off of another model, possibly late gen Accord? 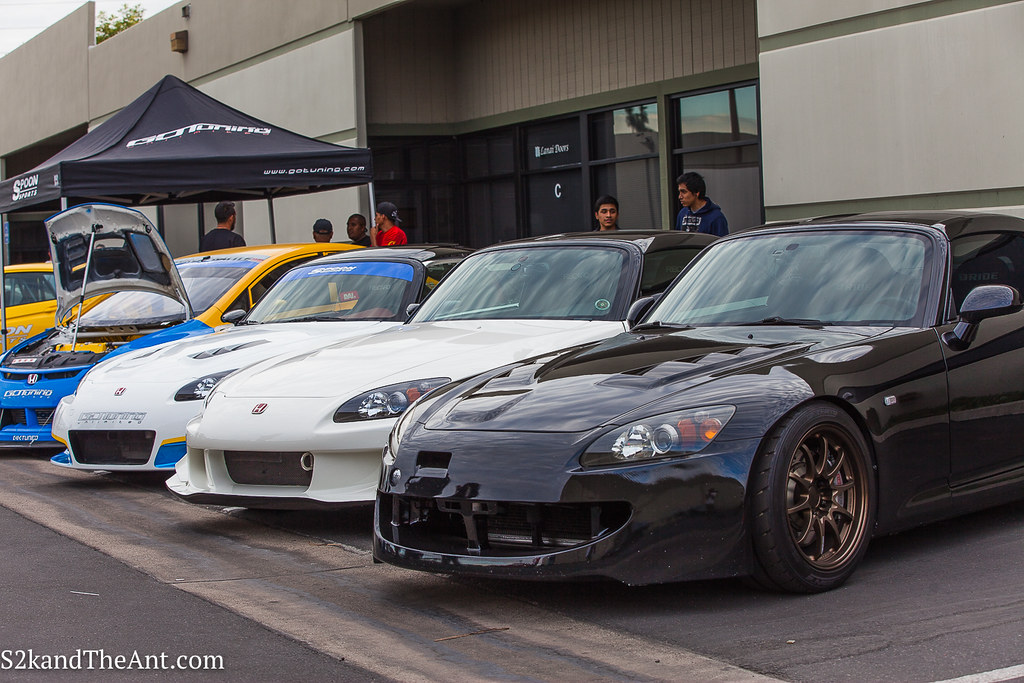 Another angle of the featured GoTuning Lineup. 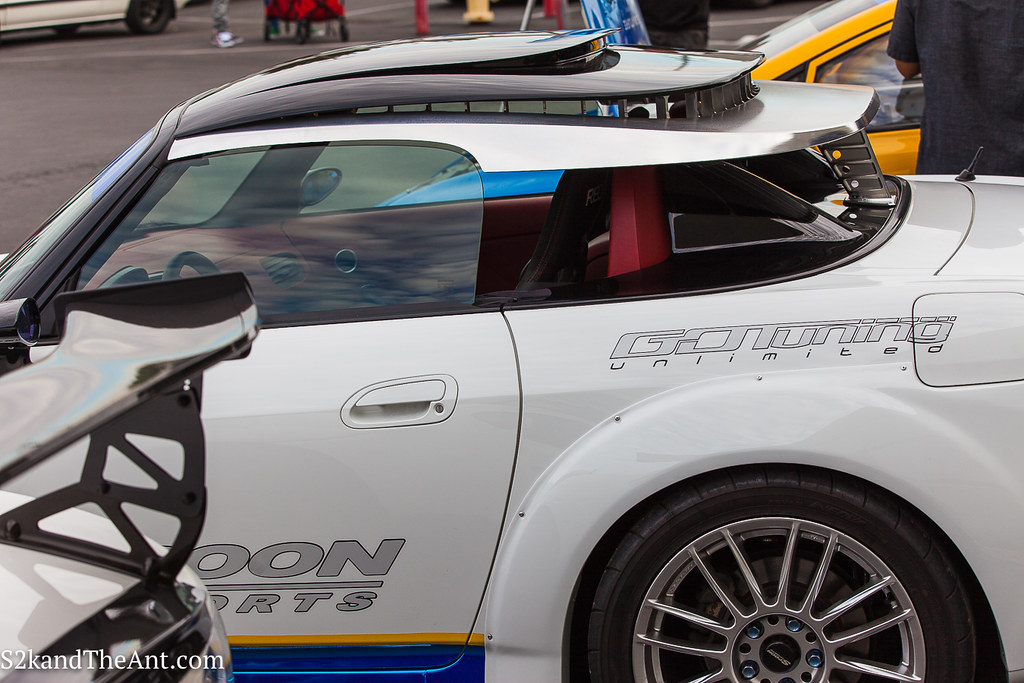 I know this has been around, but it was my first time seeing this in person. What is insane about the Spoon prototype hardtop is that the entire metal piece is CNC machined out of a single block. 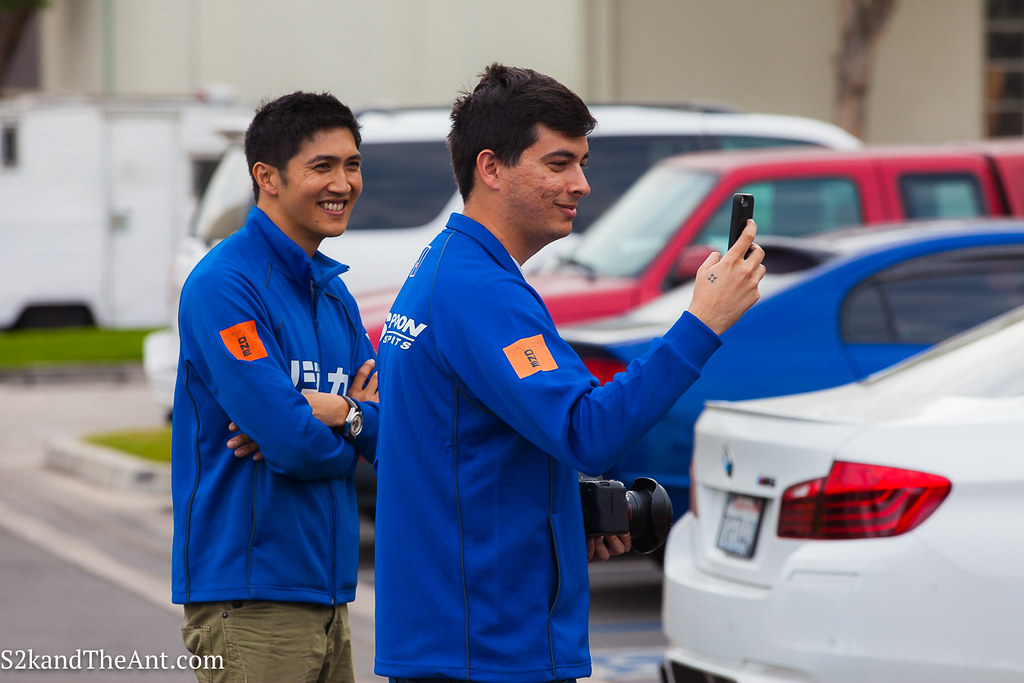 Areen living up the Spoon life. 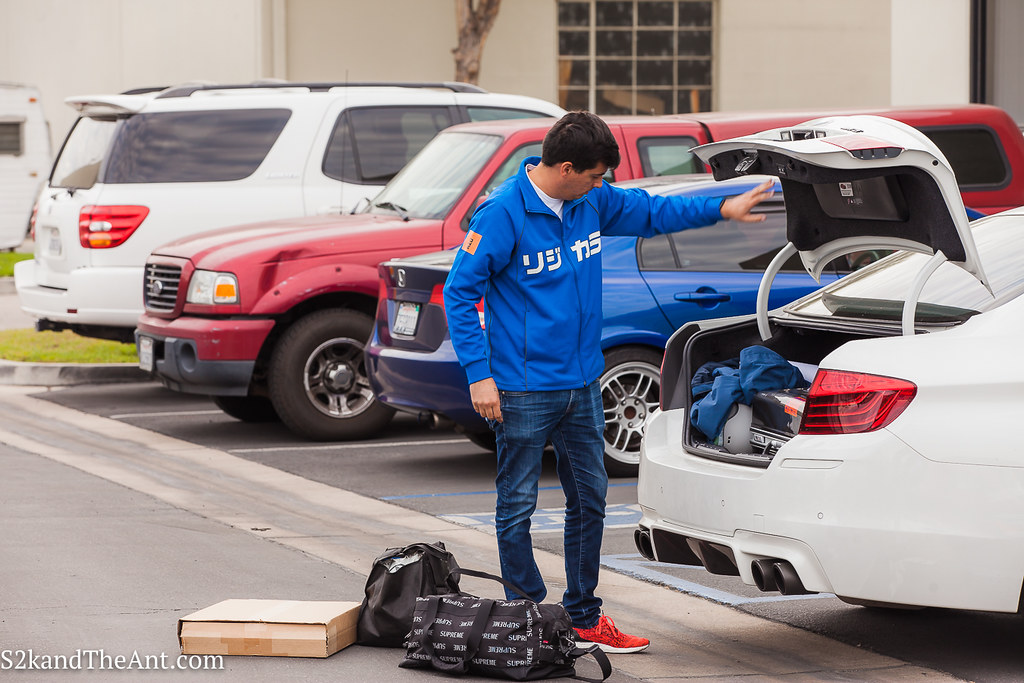 At this point Ichishima san rolled up in this BMW M5, Areen is hard at work assisting Ichishima San. 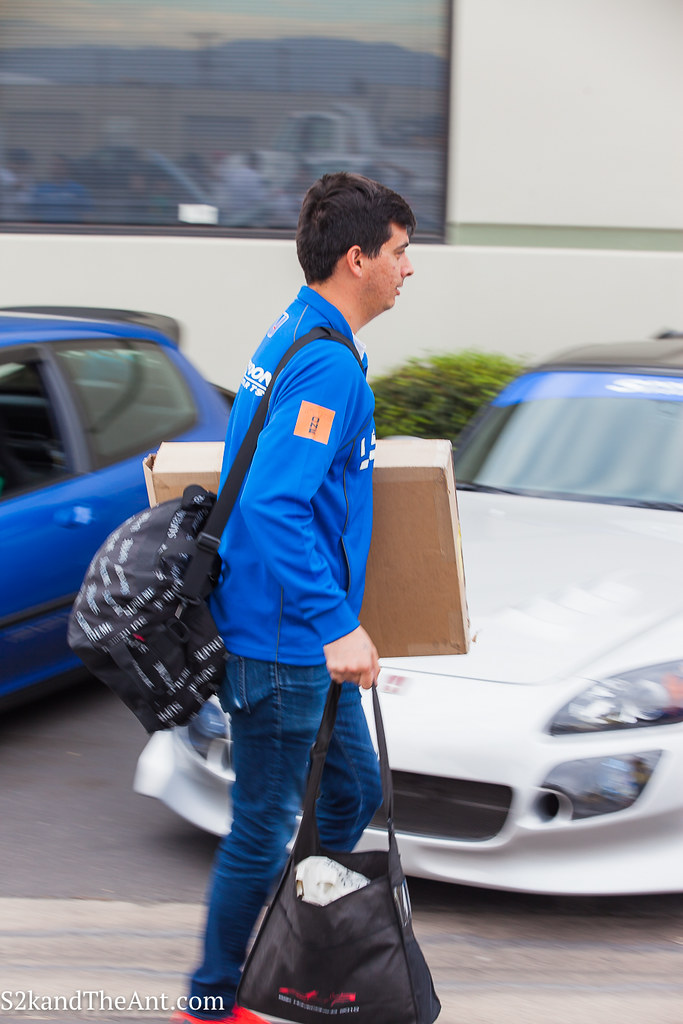 Not only does he have a sick Spoon/ASM themed S2k, he’s also really good at carrying stuff. 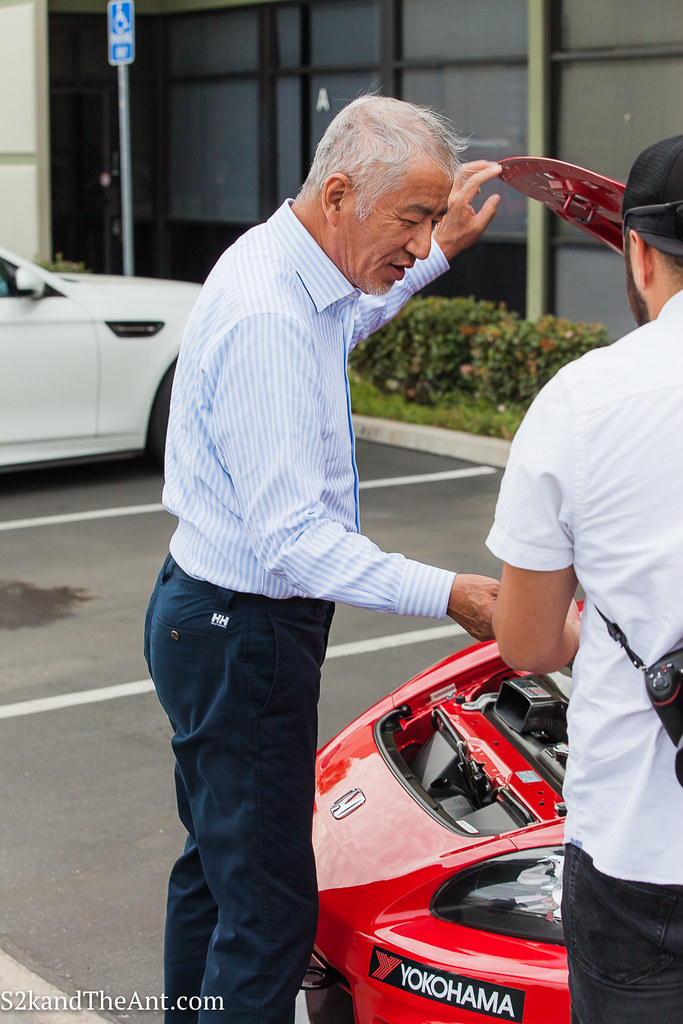 Ichishima San arrived and got to work.  Here he is signing Hector’s car. 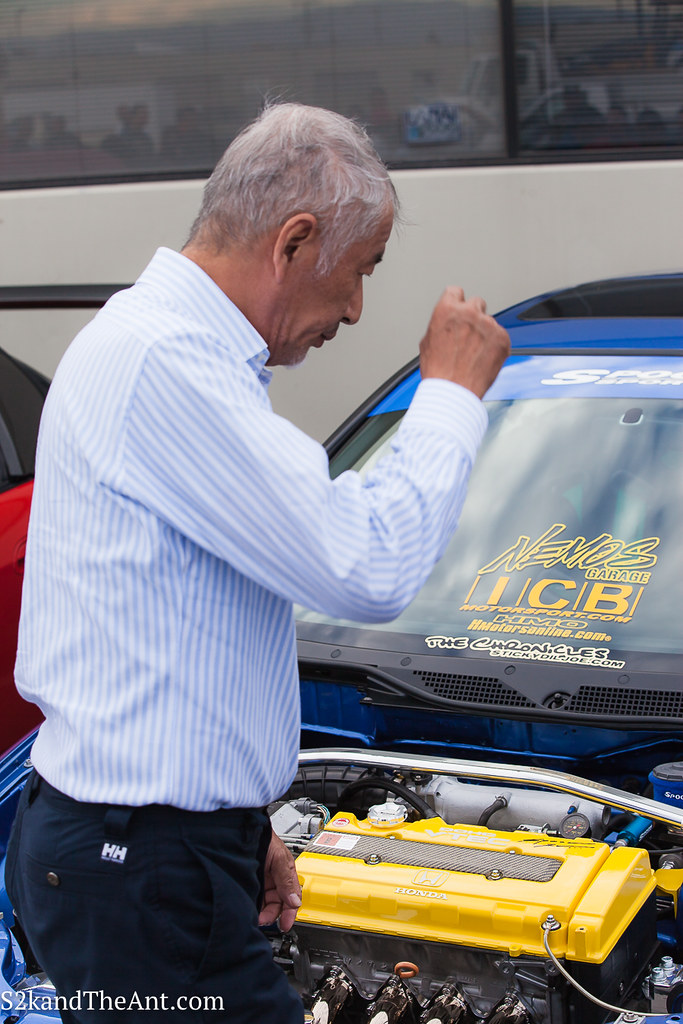 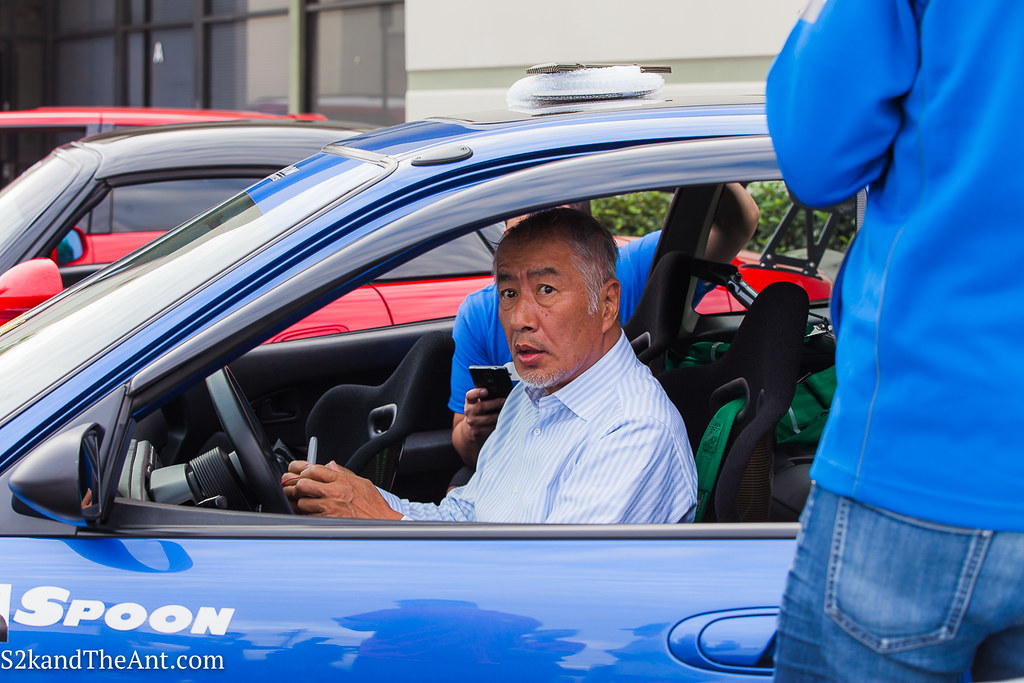 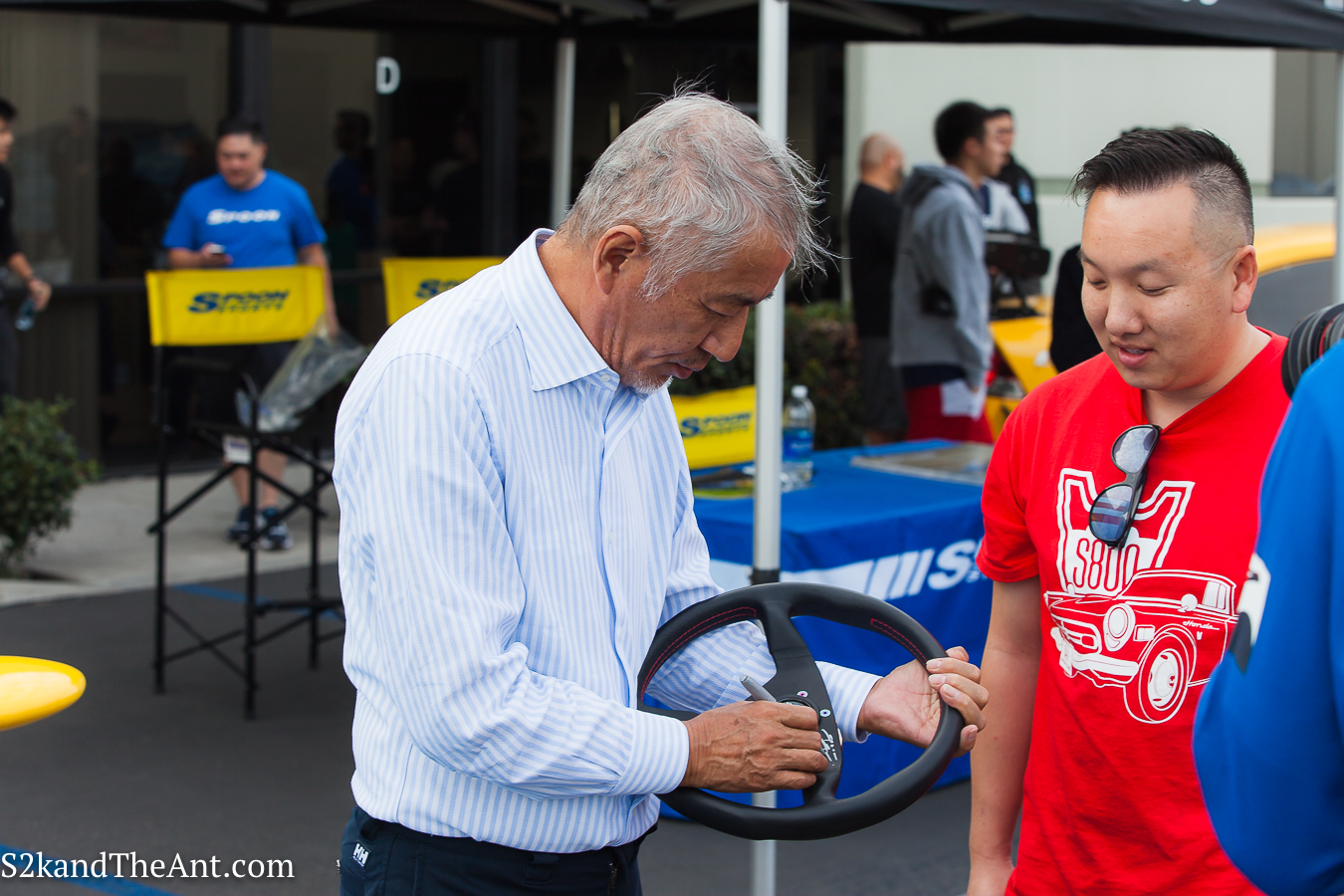 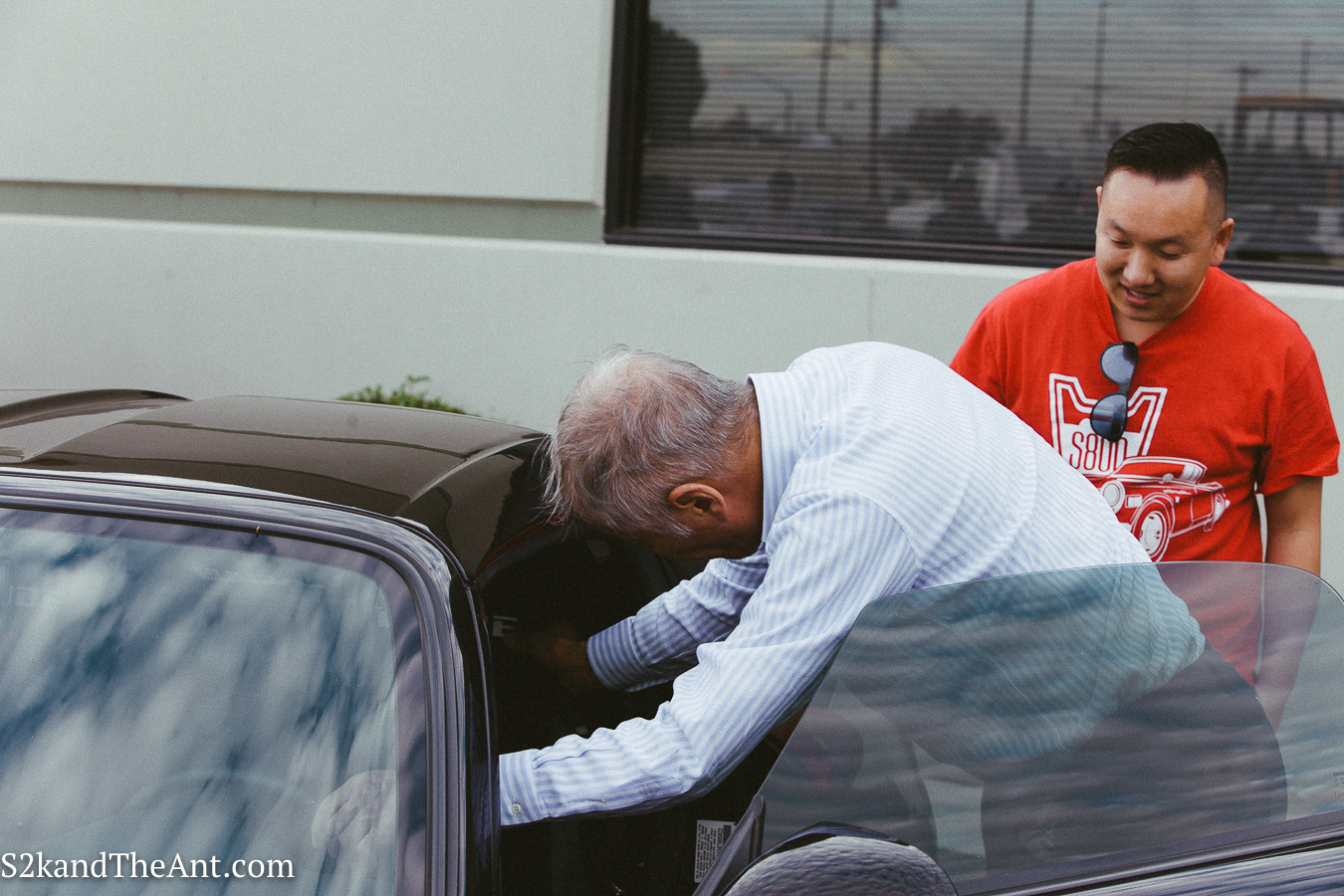 Chris’s all Mugen car.  I mentioned the car is all Mugen, and he said,  “he loves all Hondas!” 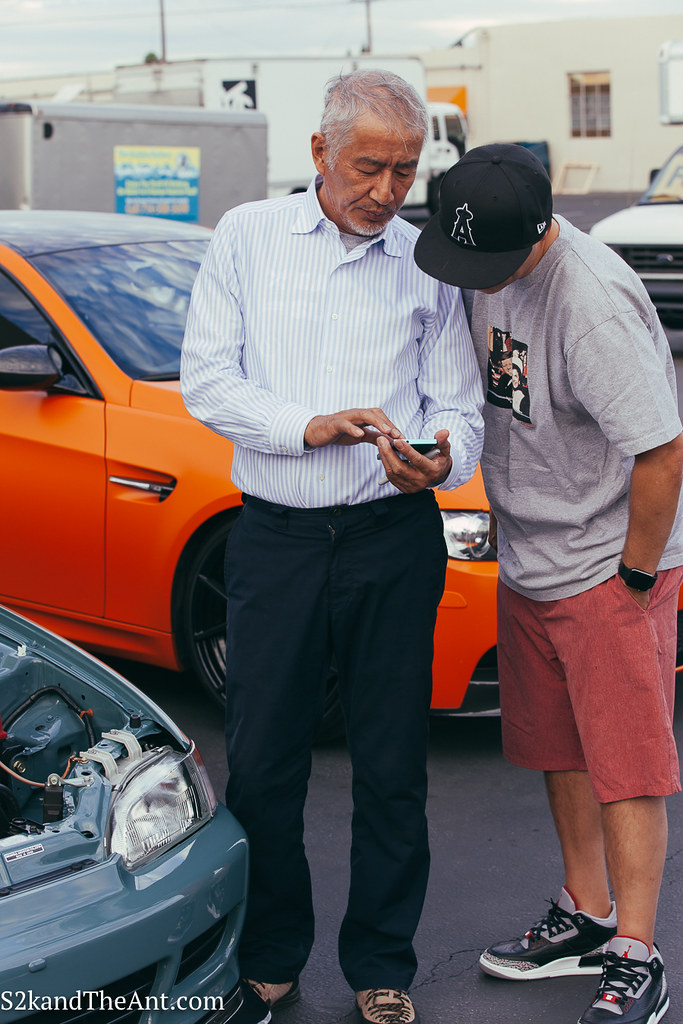 Checking out the EG civic and showing the owner of pictures of his own personal cars…… Nice Jordan IIIs btw…. 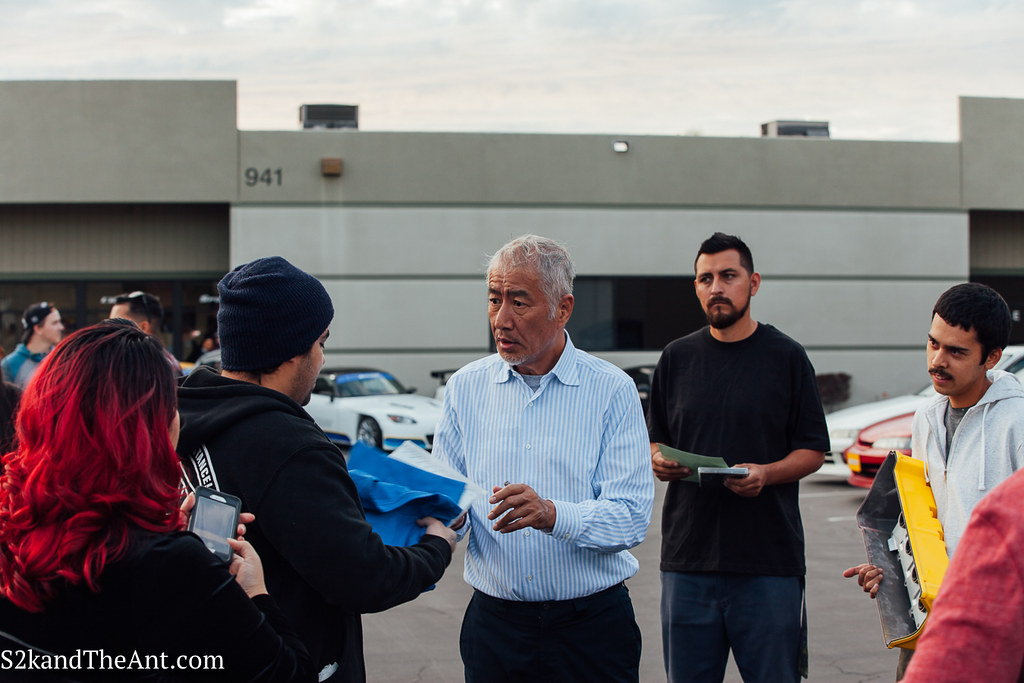 People were trying to get everything signed this day.  I saw the most Spoon clusters Brand new in Box I’ve ever seen in my entire life getting signed, it’s crazy how much they go for nowadays….. 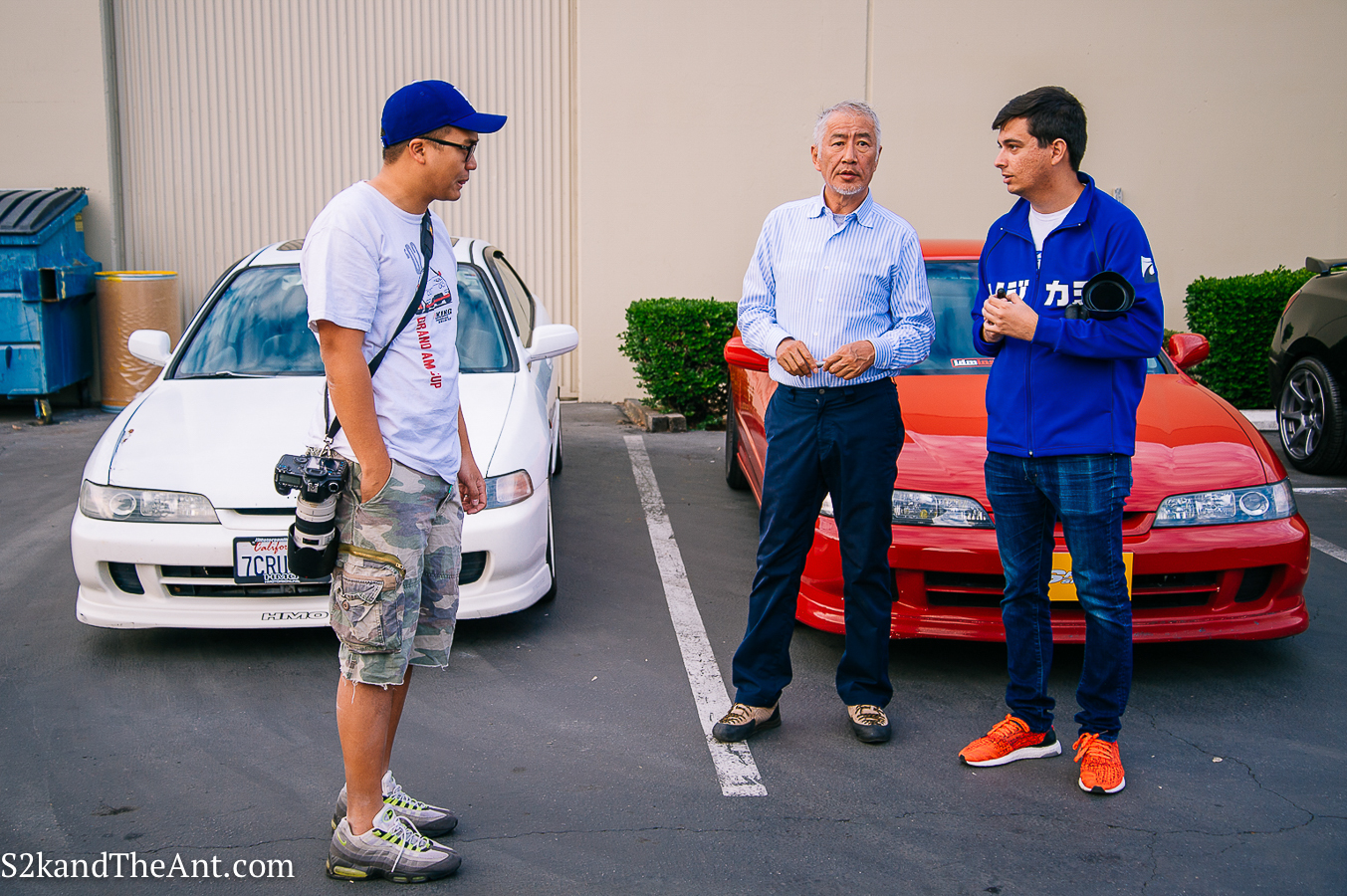 Myself, Ichishima, and Areen. 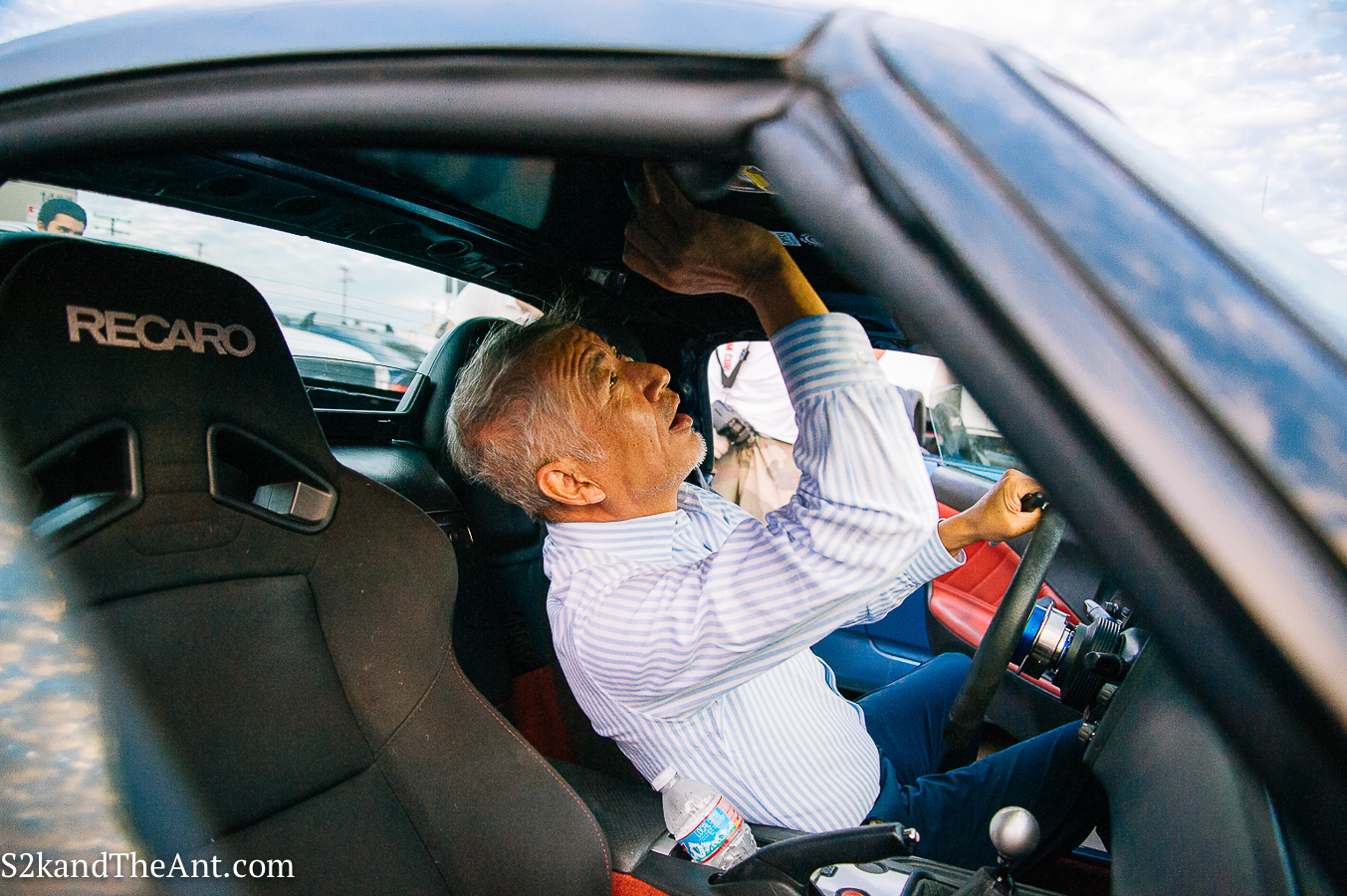 I requested to sign my Spoon rear view mirror, inside of my hardtop, and an S2k Spoon Spark Plug cover. 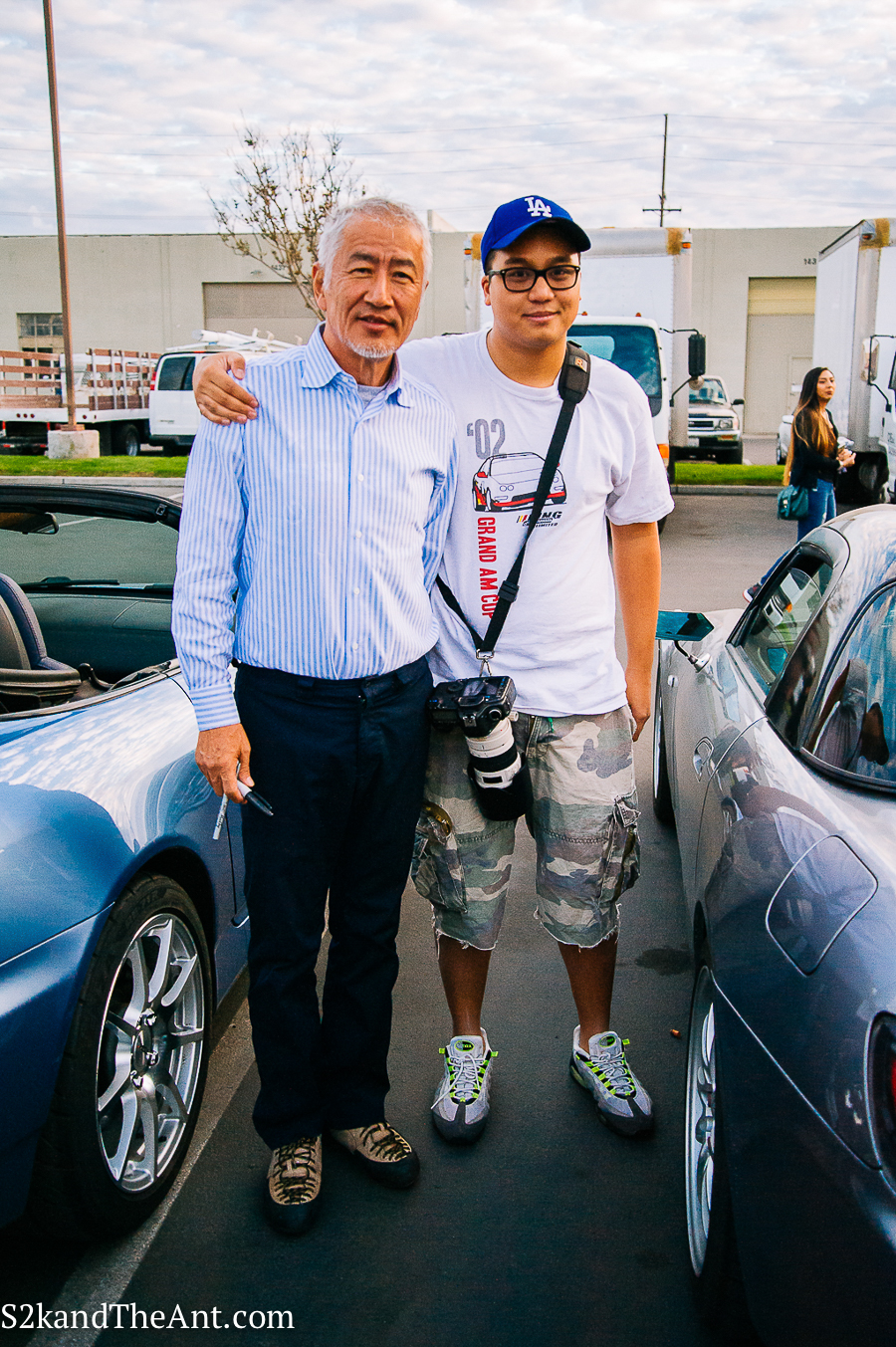 Ichishima san and I…. I didn’t know what to do with my arm here….. 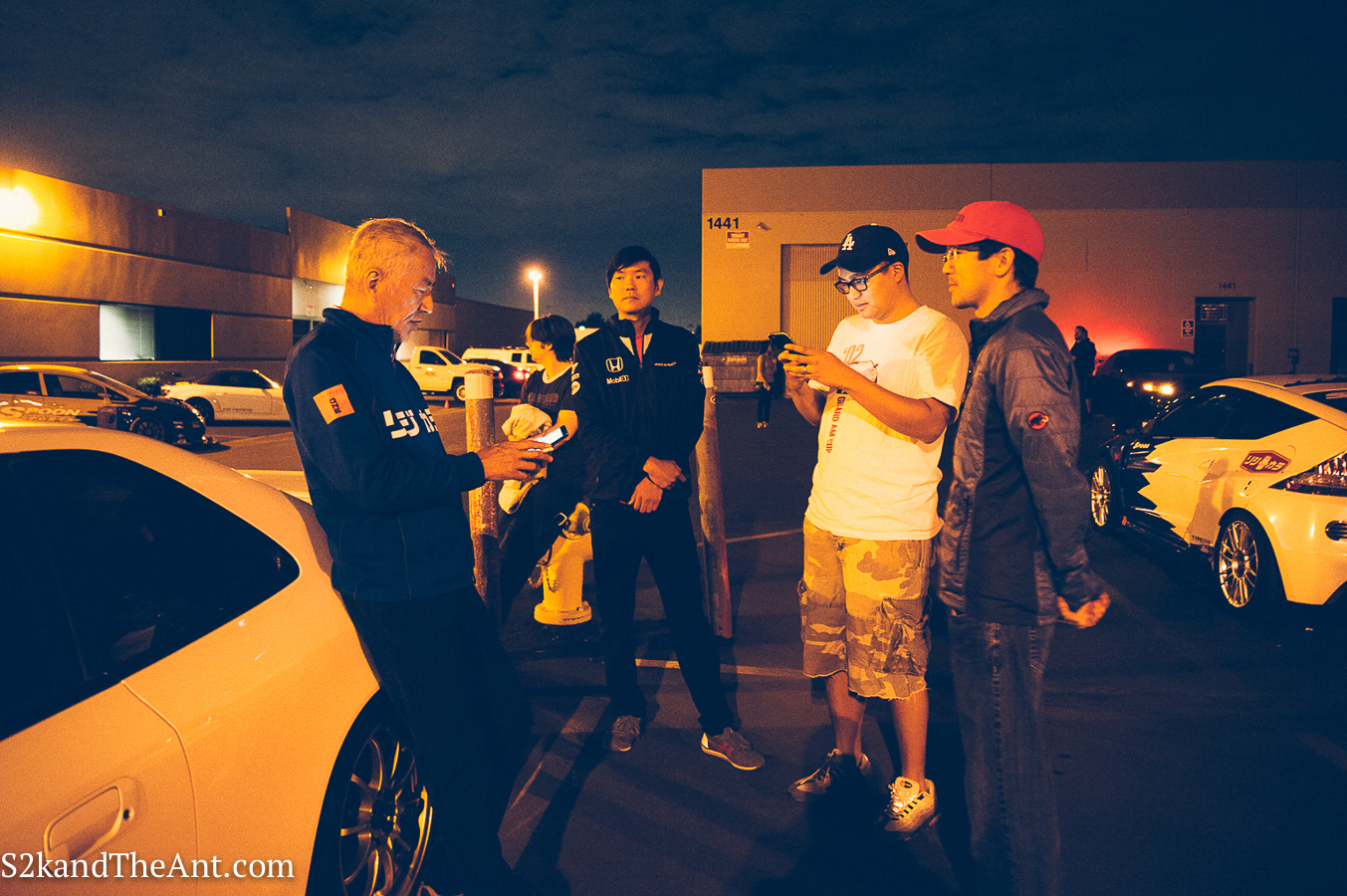 Closing it out with this picture….here I was getting ready to yell at Ichishima san for leaning on my friend’s car…..

One thought on “Life: The day I meet Ichishima San! at Spoon Sports USA”