Sup internet! Things have been slow recently on the site… We just purchased a house and we’re in the process of getting things finalized. As you know houses in Southern California are crazy expensive! My only requirement is a garage, luckily the house we are looking at has enough room for 3 cars! No more wrenching in my apartment parking garage getting strange looks from my elderly asian neighbors.  This also leaves an empty space for a future daily/project 🙂

I noticed recently that there was a pool of coolant on the ground wherever I parked….. I decided to replace the radiator since I knew the plastic one will end up cracking sooner or later, this has happened to me on numerous cars I’ve owned. 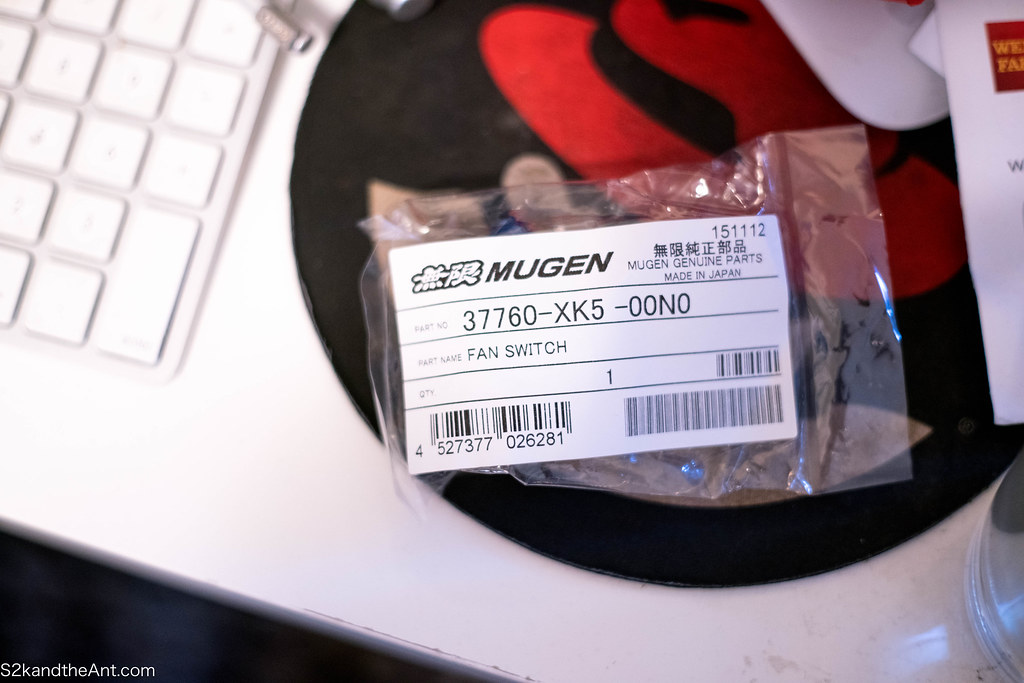 Since the radiator was out, I had to pair my existing Mugen thermostat with this new Mugen fan switch I ordered:)  Overkill, and probably not good for my car since I’m not tracking my car like crazy, and I may be running too cool…… but it says Mugen! 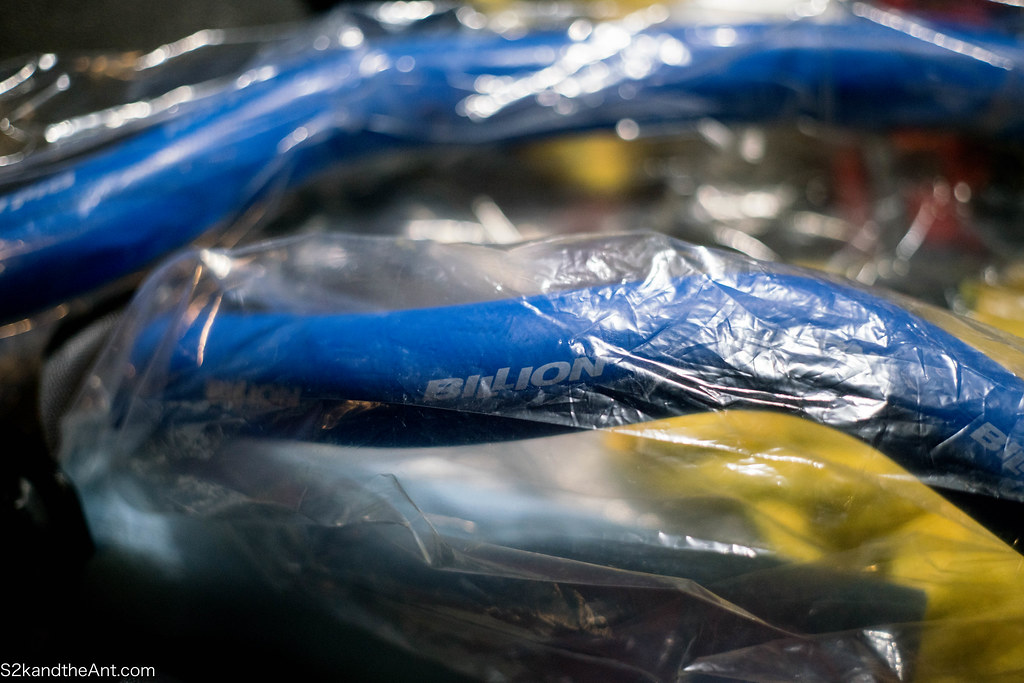 I was holding on to these Billion Hoses for awhile now, waiting for the day I would have to change the radiator.  Billion hoses are extremely popular in Japan, even ASM runs them on their cars.  You don’t see too many of these hoses on S2ks in the USA. 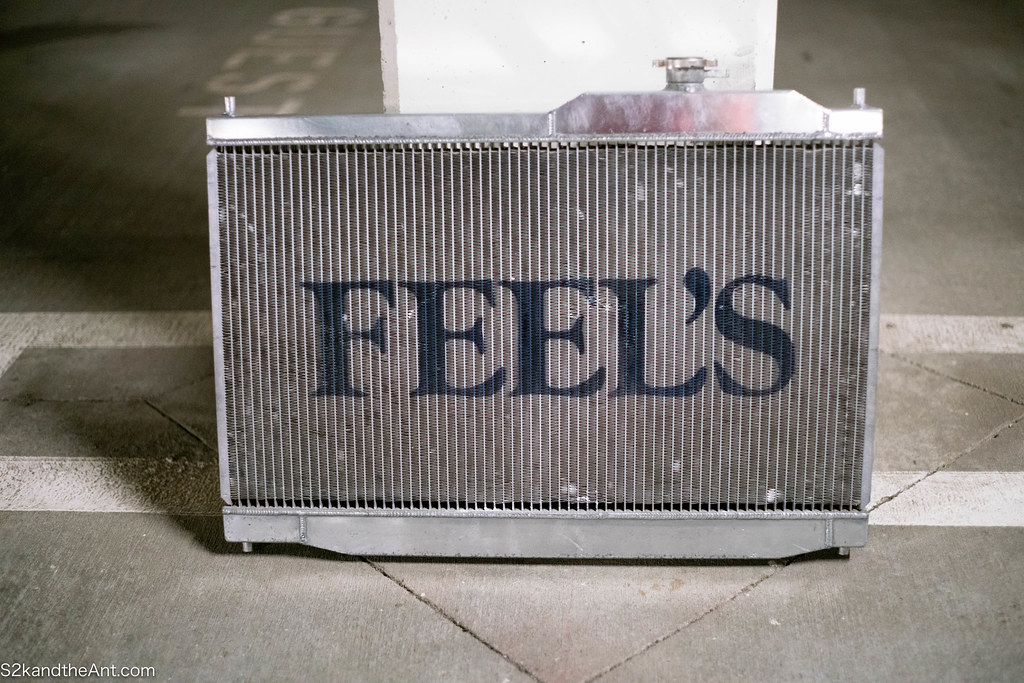 I was able to pick up a FEEL’S Radiator for the S2000 for a good price used….. I wanted to give the radiator a nice polish to freshen it up, but I was in a pinch and driving my friend’s WRX around and wanted to give it back to him ASAP!  I’m not a big fan of driving other’s peoples cars around in case something happens. 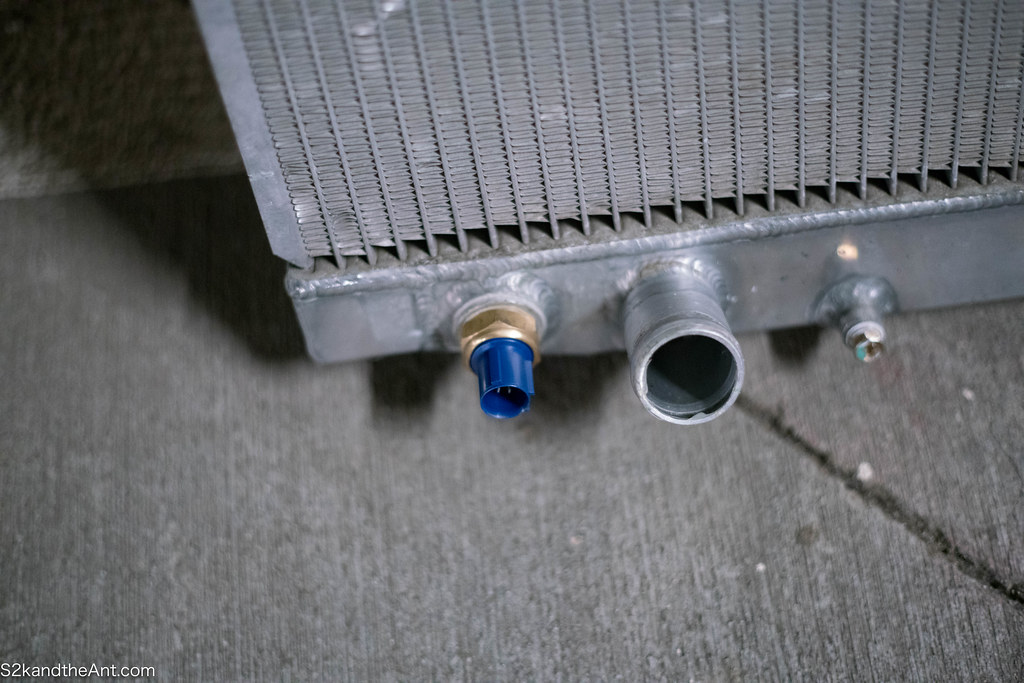 First things first, I bolted on the Mugen Fan Switch.  *Pro-tip, if you have a standalone EMS, you can set the temperature when to have the fan kick on.  I knew I was able to do this in the Hondata software when I had KPRO, you can save a few bucks….. 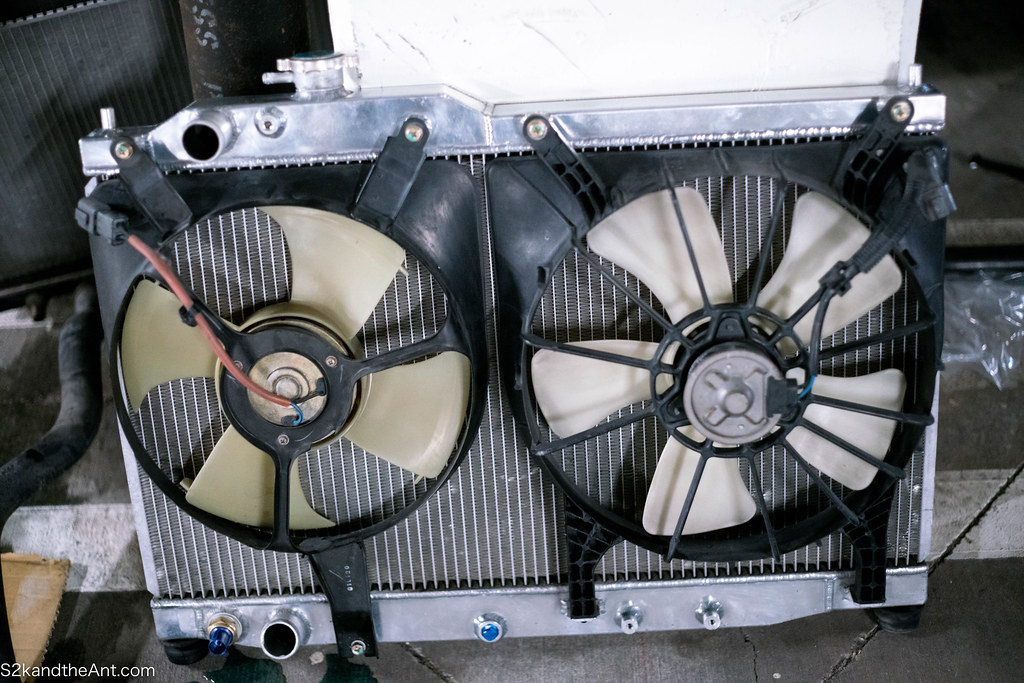 Next, I swapped over the Fans from my stock Radiator.  It was a simple bolt-on affair.  Everything fit perfectly of course being FEEL’s! 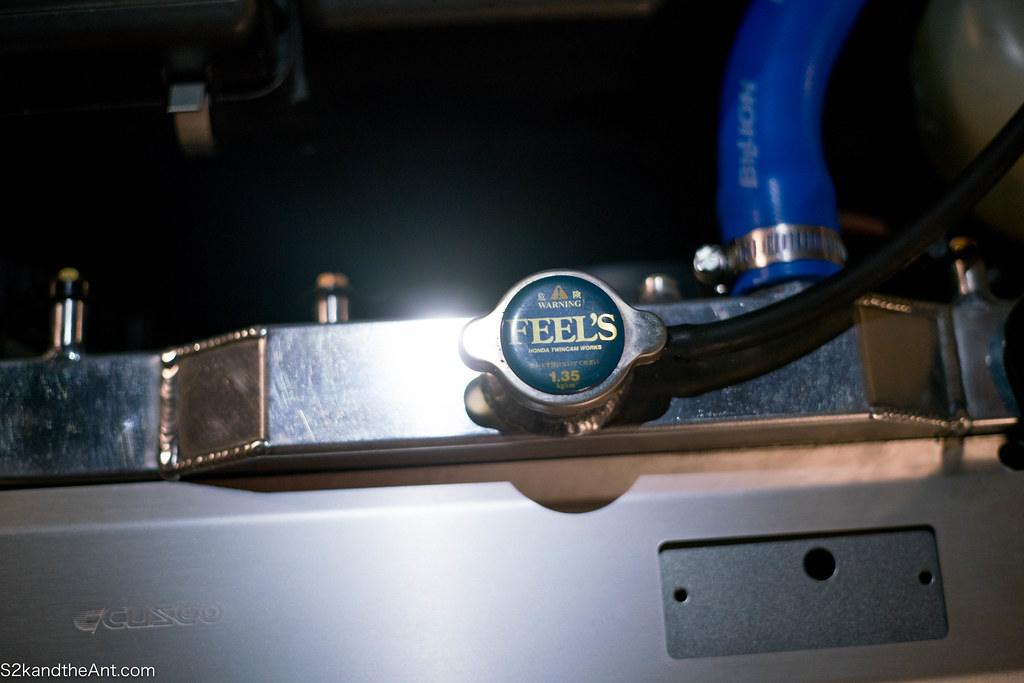 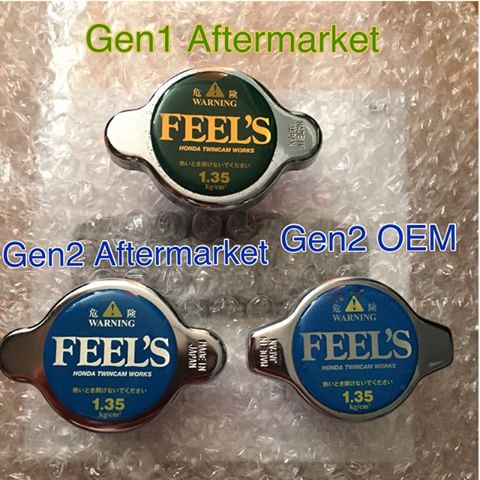 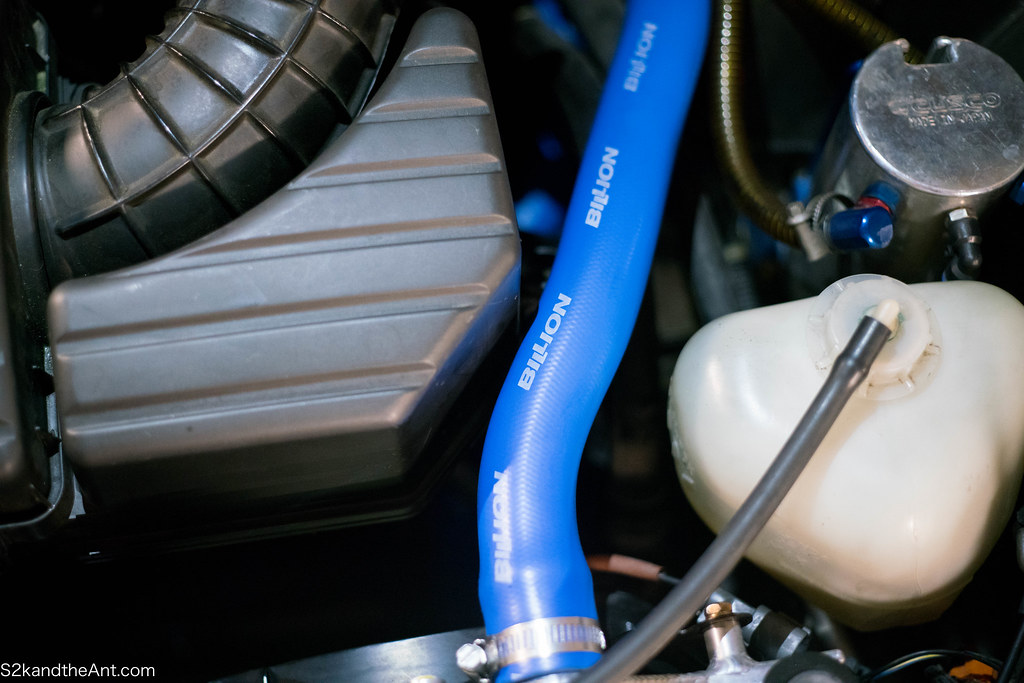 I reused most of my OEM radiator hose clamps except the bottom one.  It was a bit corroded from years of use, so I swapped the top OEM clamp to the bottom and used a new worm gear unit that was included with my Billion Hoses. 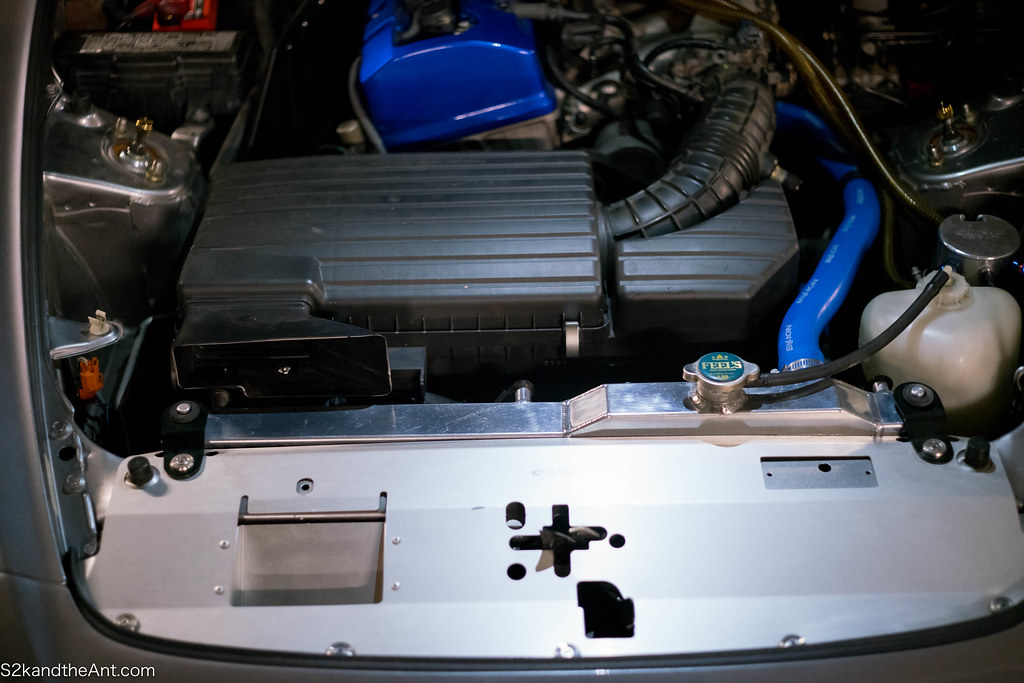 I’m liking the blue accents in my engine bay with the blue Valve cover and Billion hoses.  I promise you I’ll polish up the radiator so it’s more bling bling, I would prefer taking it off again, giving it a quick sand and polish….It looks like my Cusco oil catch can needs some love too.  Unfortunately the coolant problem wasn’t my radiator, it was actually a rubber cap I had on my thermostat housing since I deleted the coolant line that runs through the throttle body and into the IACV…. The caps I use are typically used as vacuum caps, so they’re not exactly rated for coolant, it’s quite difficult to find caps in this size made for coolant.  The cap on the coolant hose on the firewall is about the same size, so I ordered another one and installed it on my thermostat housing, hopefully this will hold up better.

I was able to register for the Chronicles Year 8 meet, my car is definitely not at the same level as those guys, but I was able to buy an early bird ticket.  I will be seeing you guys out there, don’t be afraid to say hi!