What really brings me pride with this S2000 blog is that I do installs/Parts Reviews of rare or expensive s2000 parts.  Parts that usually have just a small blurb written about them on minkara in Japanese and there is barely any in depth information about it anywhere else on the net.   We all know Japanese tuners really suck at internet-ing.  I’ve been lagging on the S2k since I’ve been trying to remodel my home bathroom on my own with no prior knowledge of really working on homes……it’s coming together slowly.

My buddy Princess Yow purchased the ASM throttle body and ASM throttle body spacer locally.  He’s not too much of a wrench, and installing a throttle body on an S2k is simple install so I had him swing by the Ant Garage, I love showing people how easy it is to wrench on their cars, especially S2000s, everything is super easy to work on. 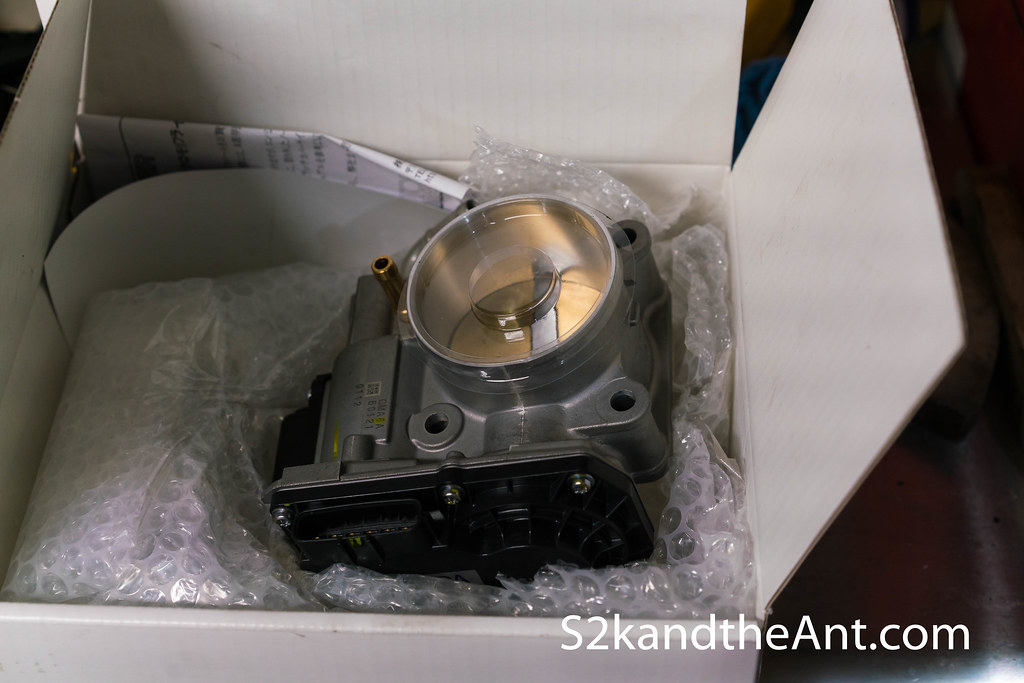 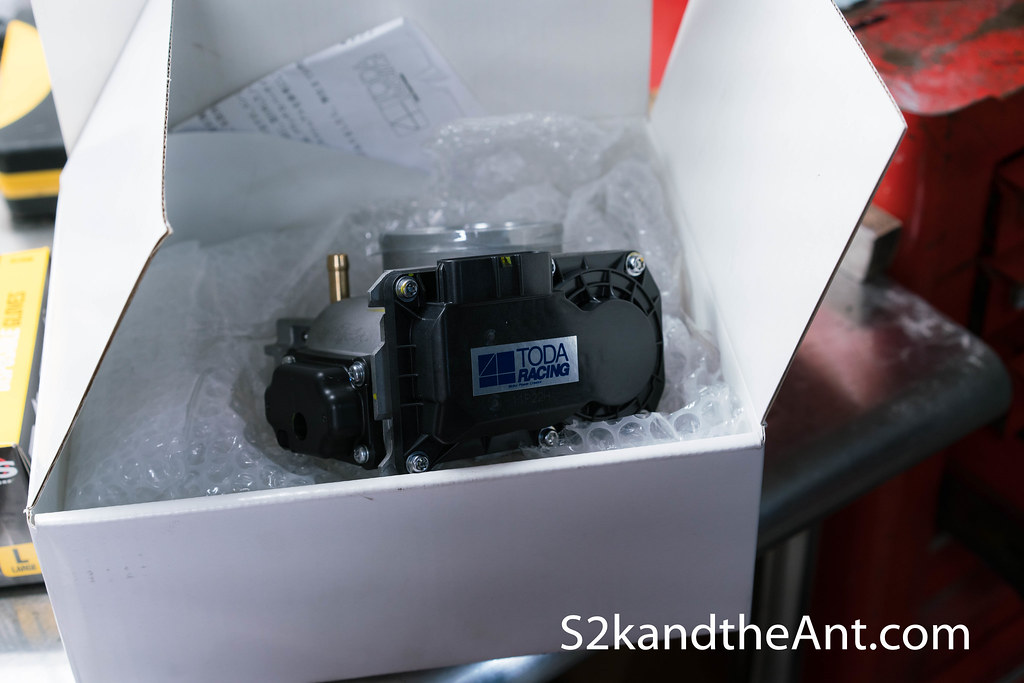 The ASM throttle body is made by Toda Racing. 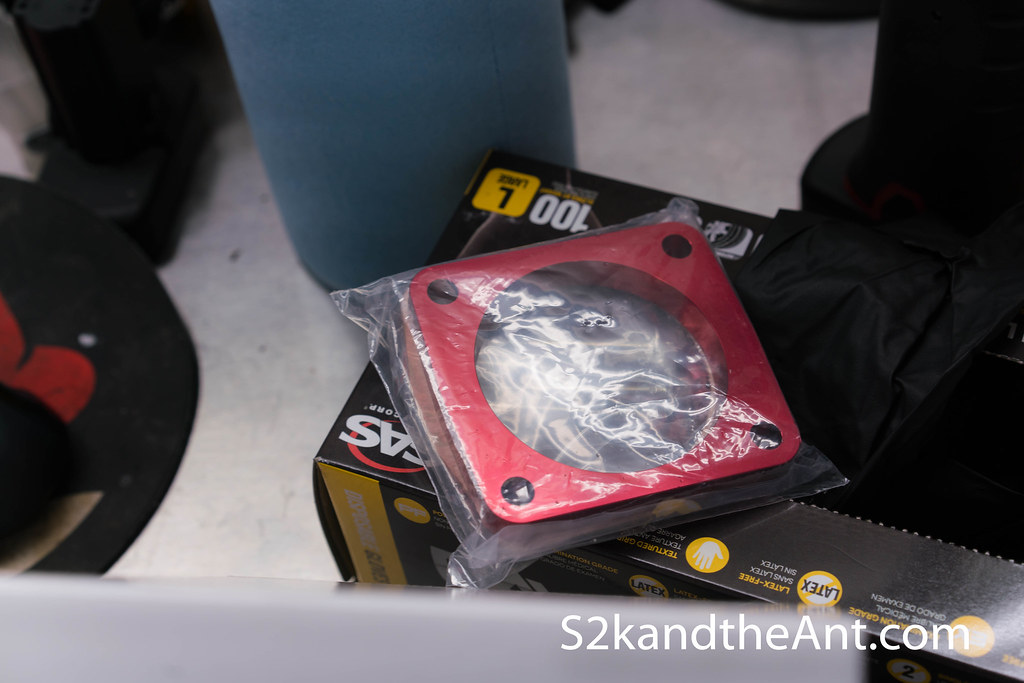 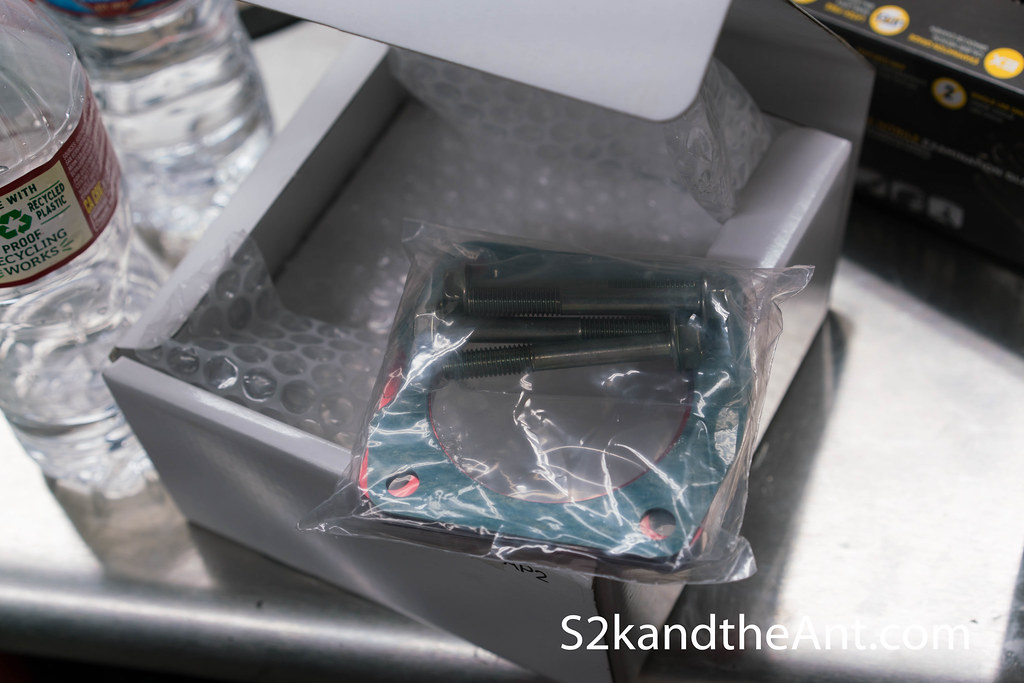 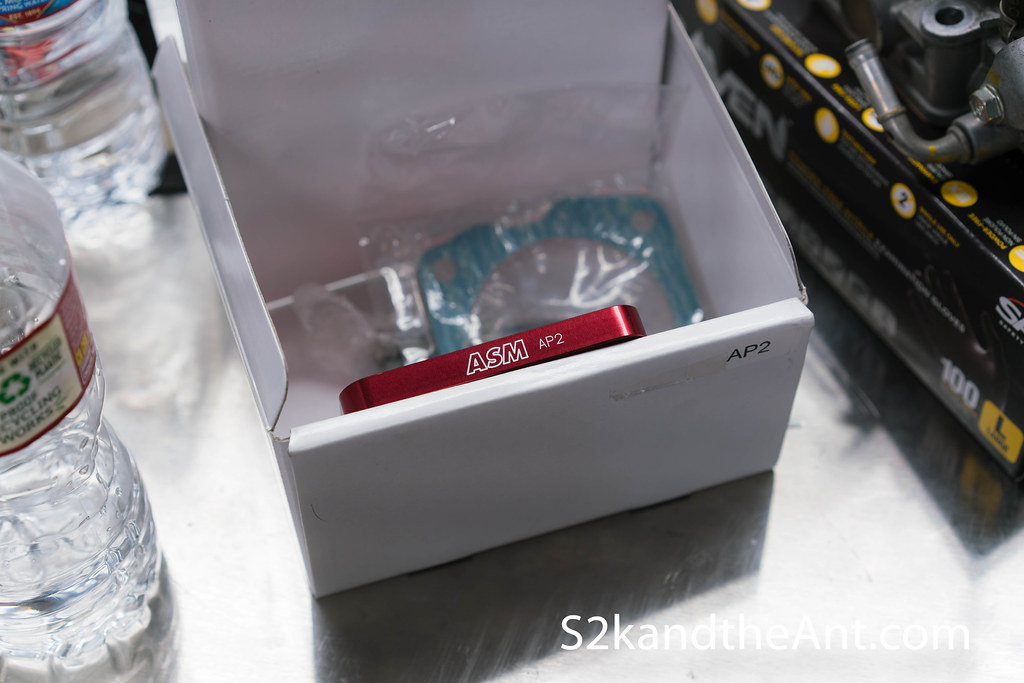 The best feature of the throttle body spacer, this beautiful ASM logo…. If you have an Ap2, make sure you buy the AP2 version since the intake manifold opening diameter is slightly larger than an AP1. 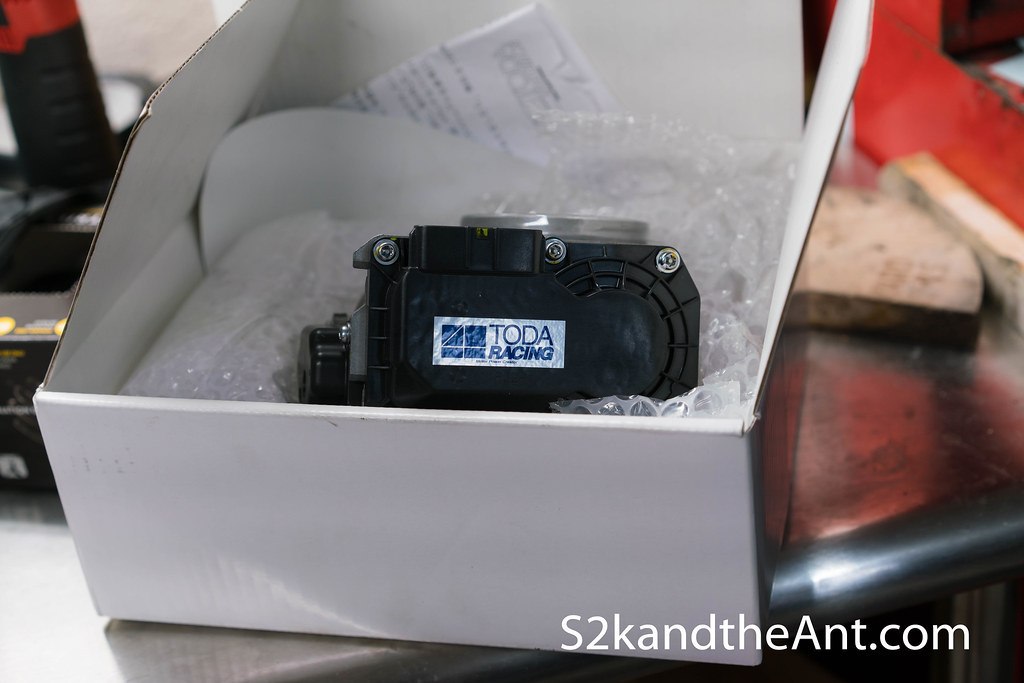 Love anything that says TODA Racing on it….. 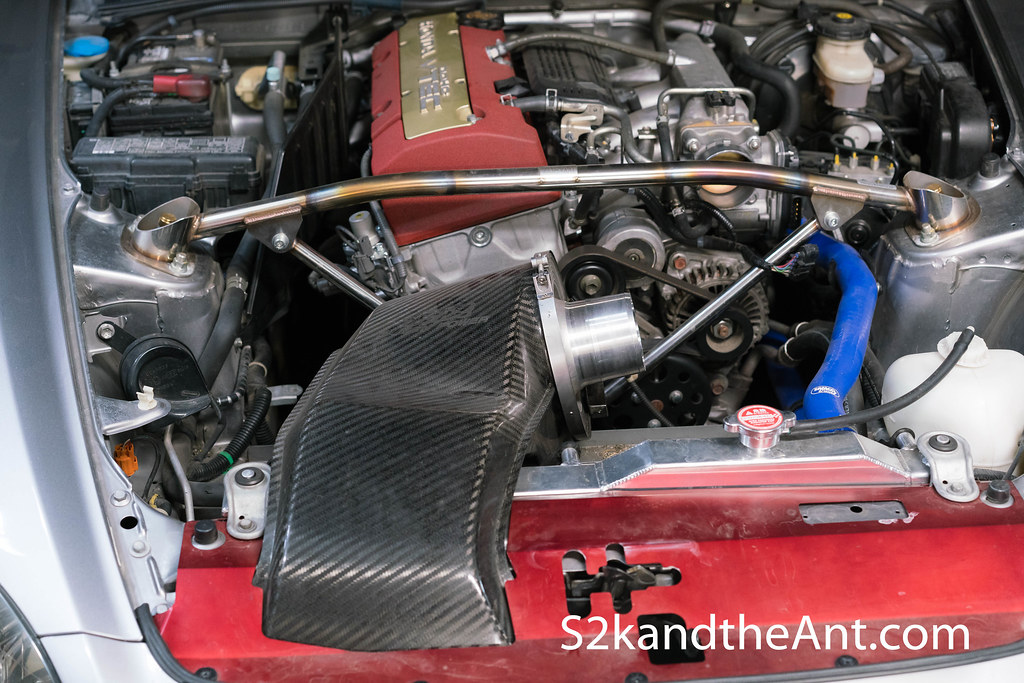 Princess Yow and I see eye to eye on many things…. He’s also a huge fan of quality JDM products.  His engine bay consists of a Mugen intake, ASM Tower bar, Amuse header, and ASM cooling plate….  He’s running Ohlins, a Koyo radiator, and samco hoses in case you guys were wondering. 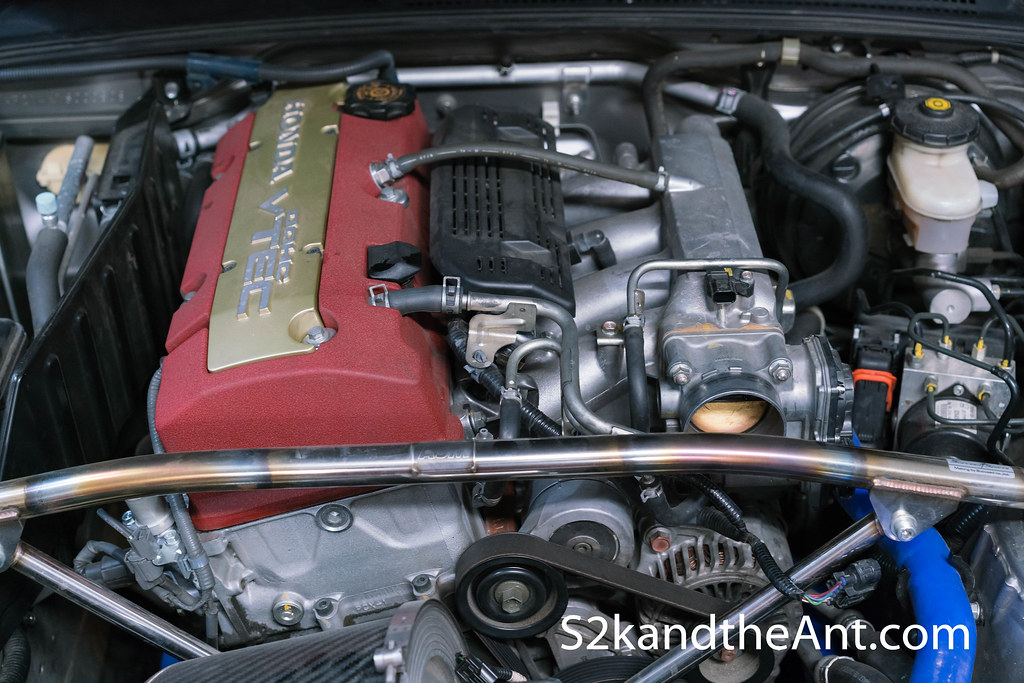 I dived into his piping hot engine bay…..I already removed the intake arm in this picture. 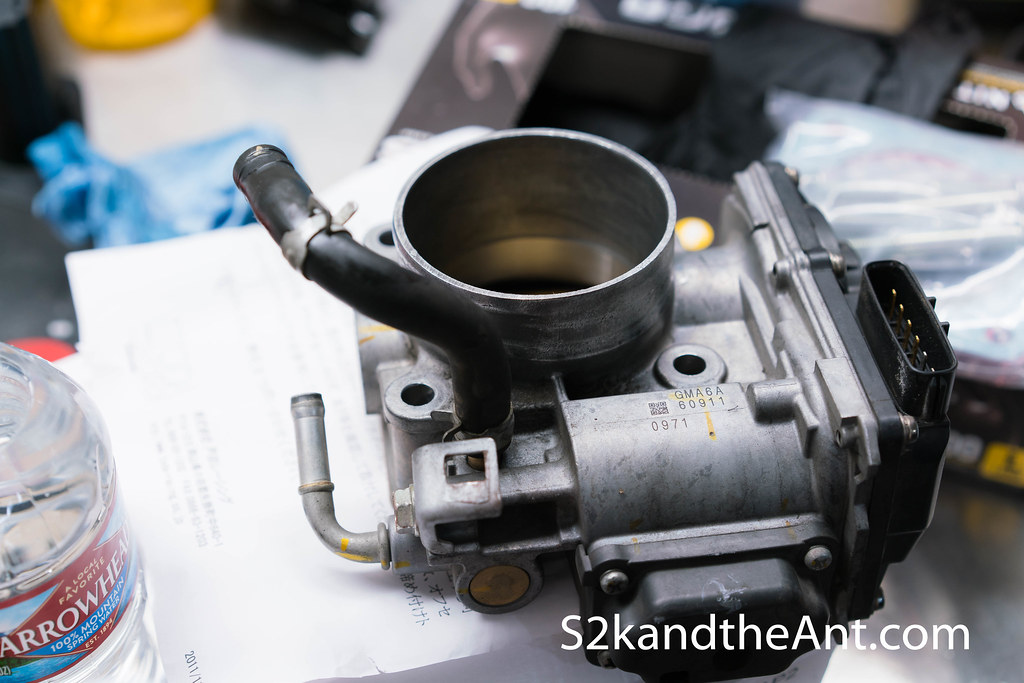 The stock throttle body removed, it was quite easy.  Just remove one clip holding in the harness, and 2 hoses that run coolant through the throttle body.  Man DBW cars are easy to work on…. no need to take of the throttle cable. 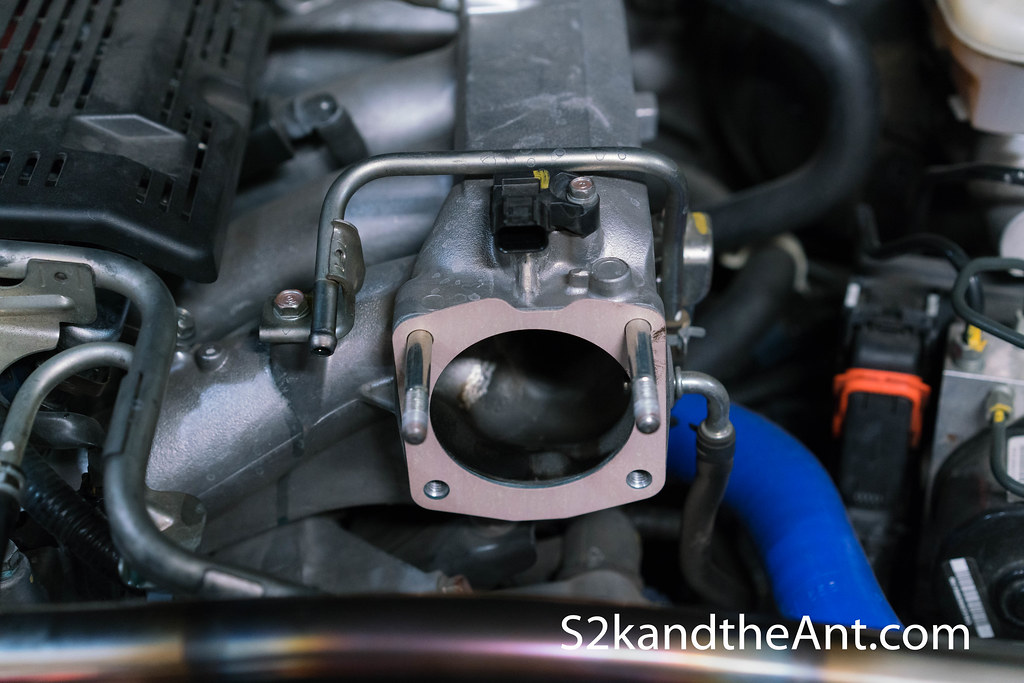 I attempted to install the throttle body spacer… First gasket on. 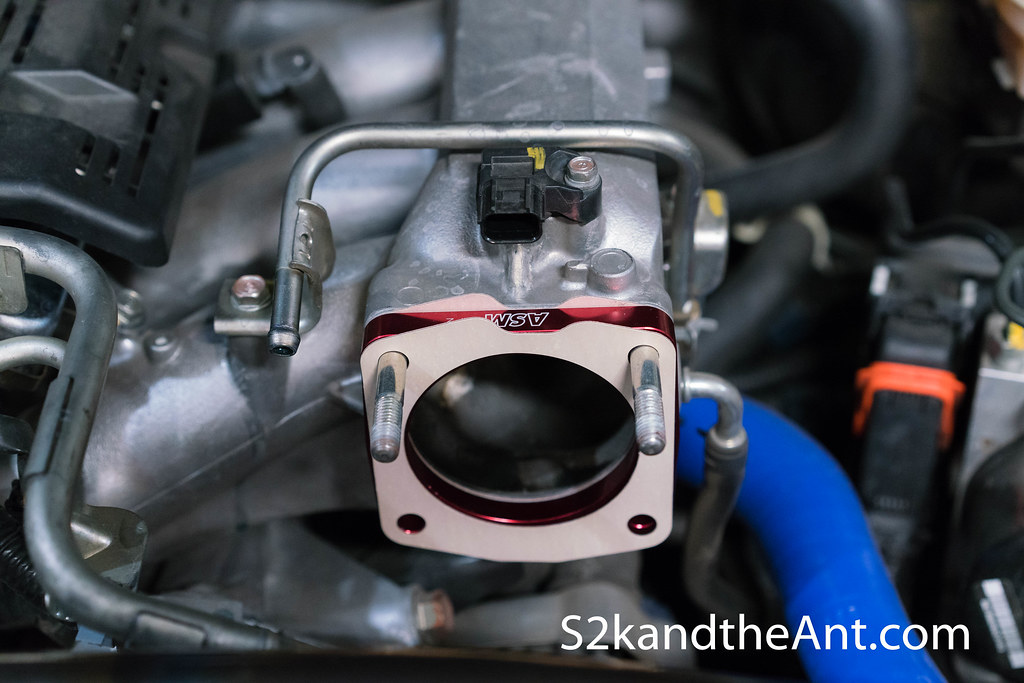 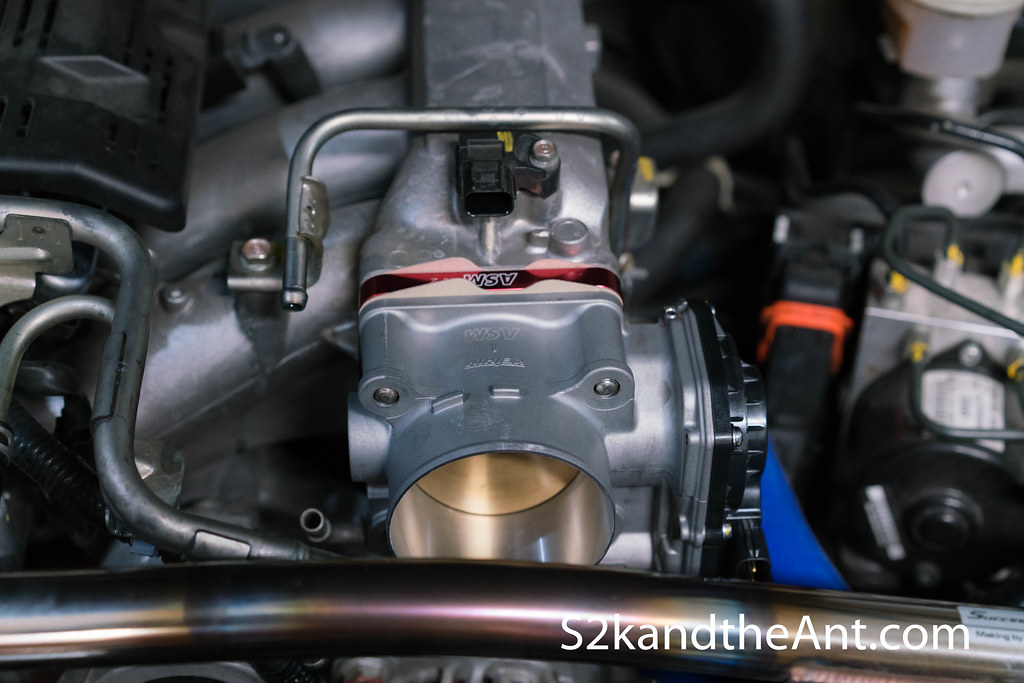 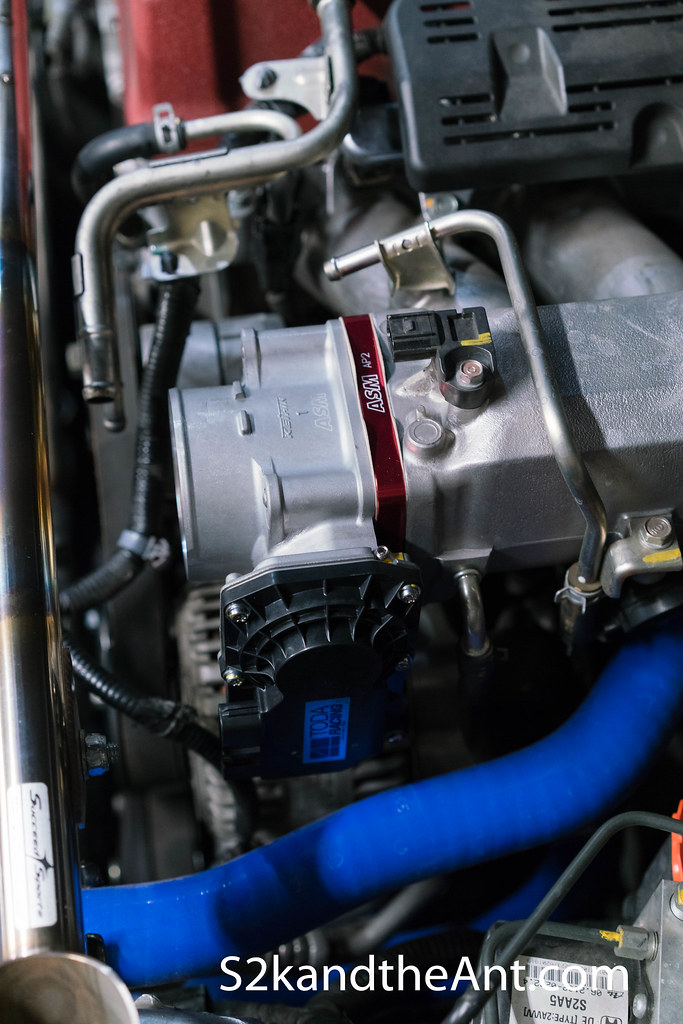 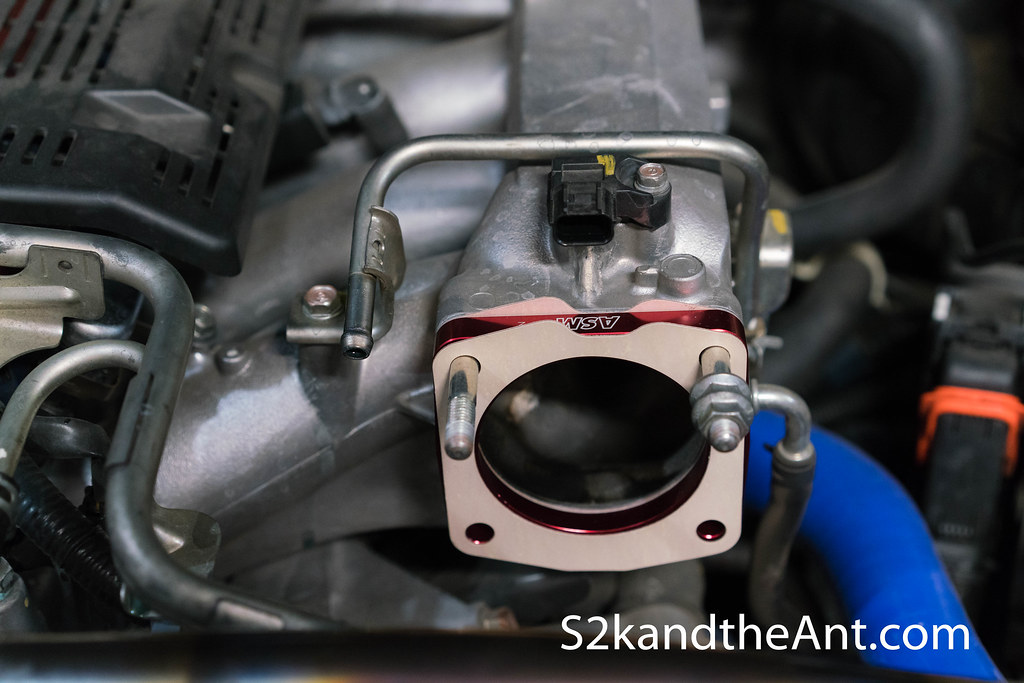 I’ve taken off my fair share of bolt studs in my day.  So to take off the studs off of this application, take two nuts that thread on the stud, tighten them against each other with 2 wrenches, and then with one wrench spin it counter clockwise to remove the stud it is attached to. 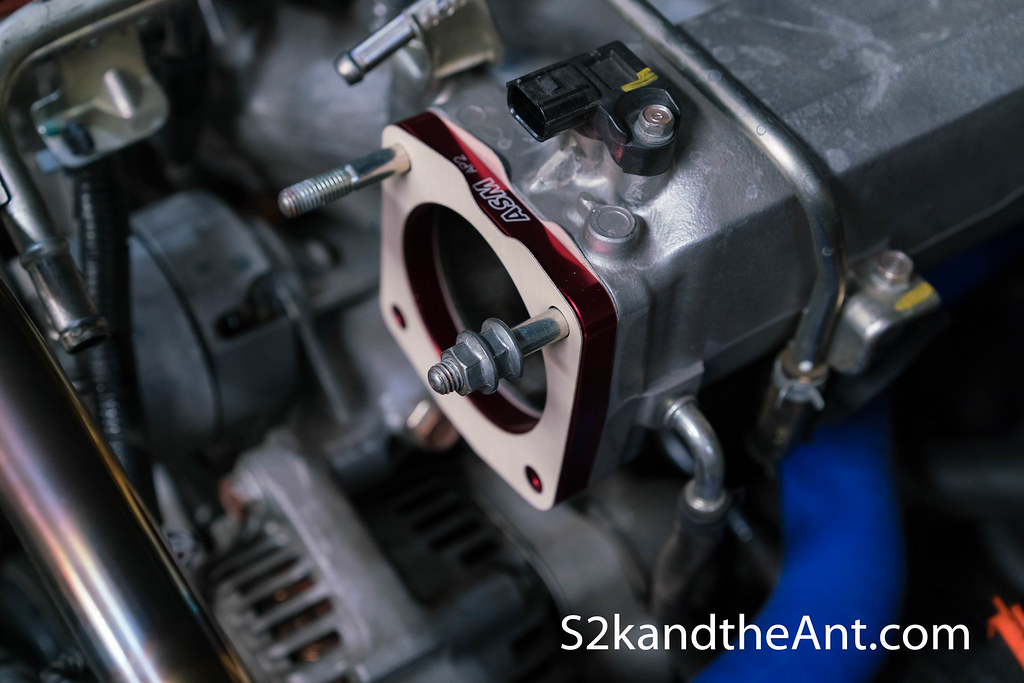 I didn’t use these nuts pictured, but nuts I had in my bin…. But you get the idea.  I have a video coming out soon. 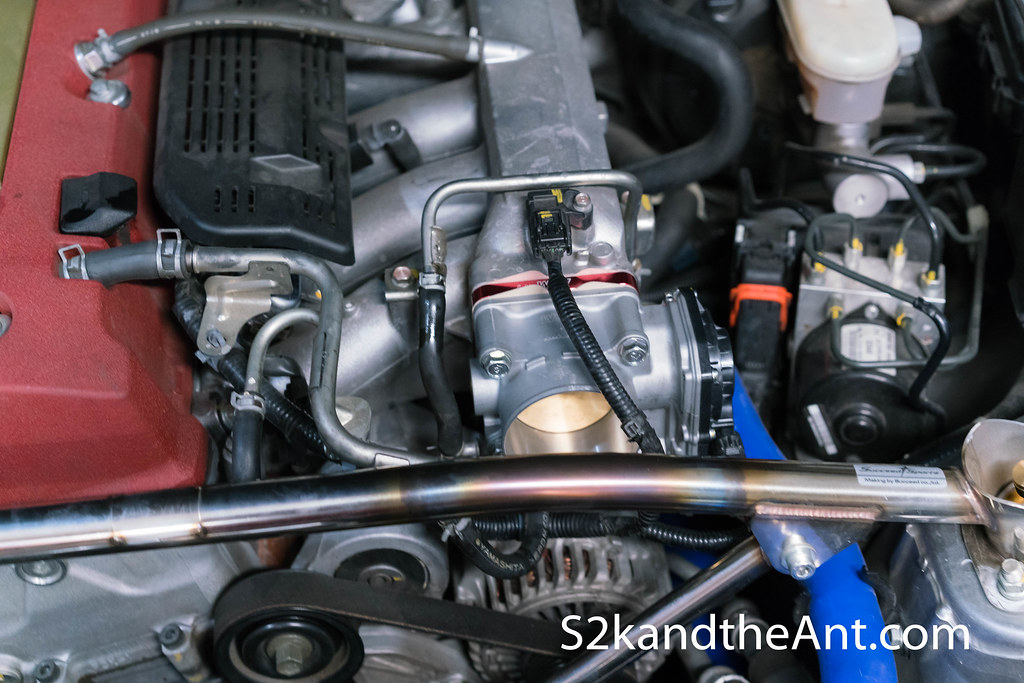 Here it is all installed!  Keep in mind since you installed a spacer, this pretty much moved everything throttle body forward 1/2″.  Don’t forget to reconnect the 2 coolant lines back in and plug in the map and throttle sensor. 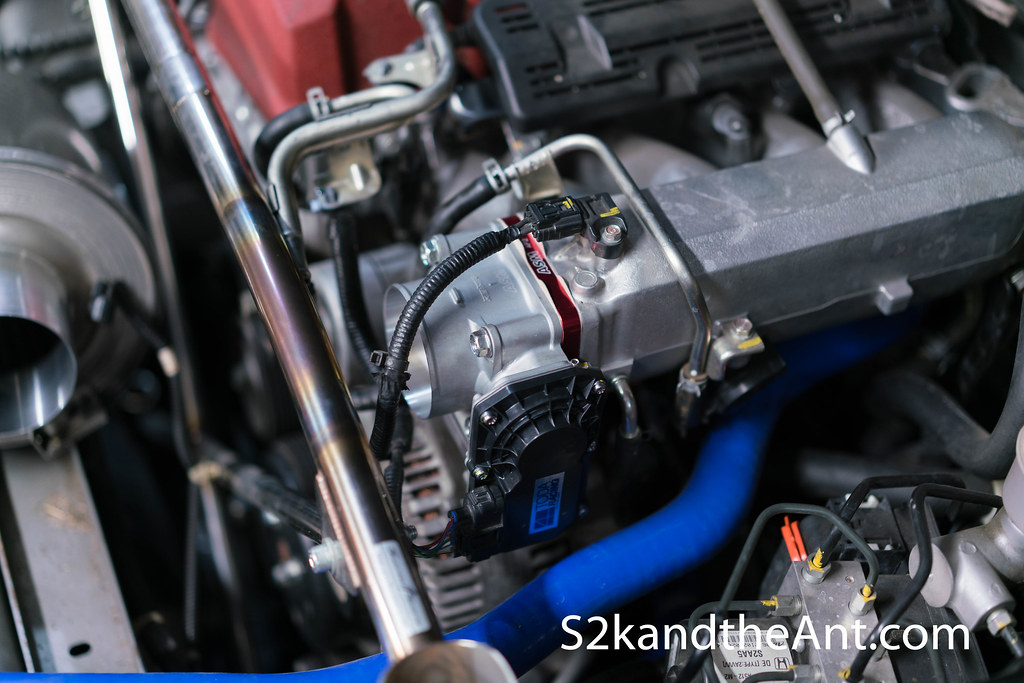 If you are OCD, feel free to trim out the area that the throttle body gasket protrudes. 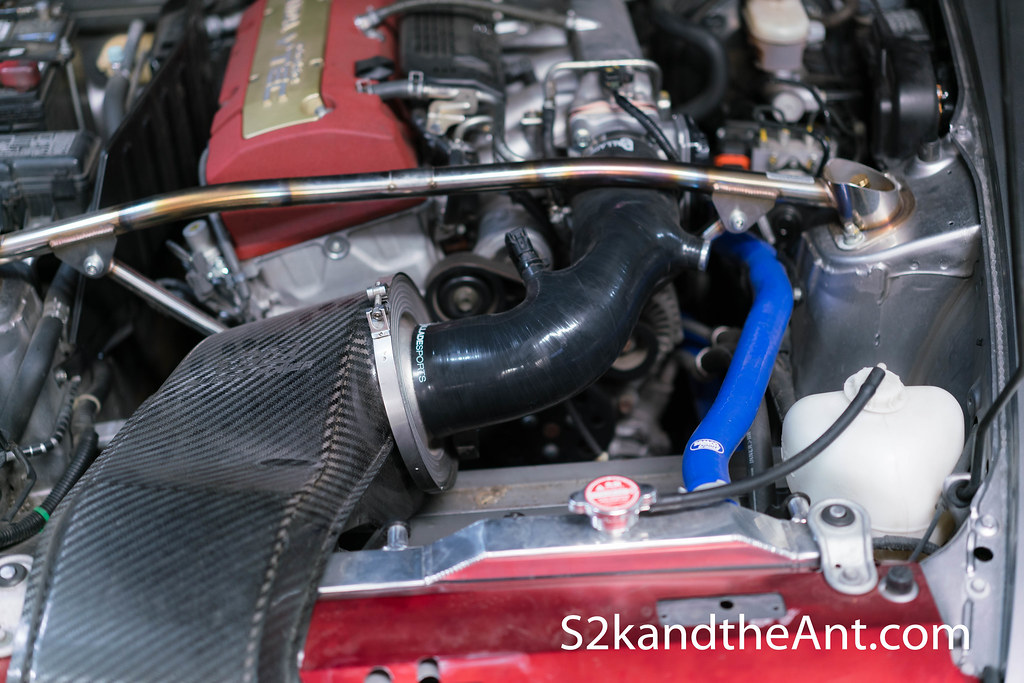 The intake arm gave us a little resistance since everything was pushed forward 1/2 a inch… It was silicon so it wasn’t too bard.  I don’t know why Princess Yow doesn’t run clamps on some of this stuff…. 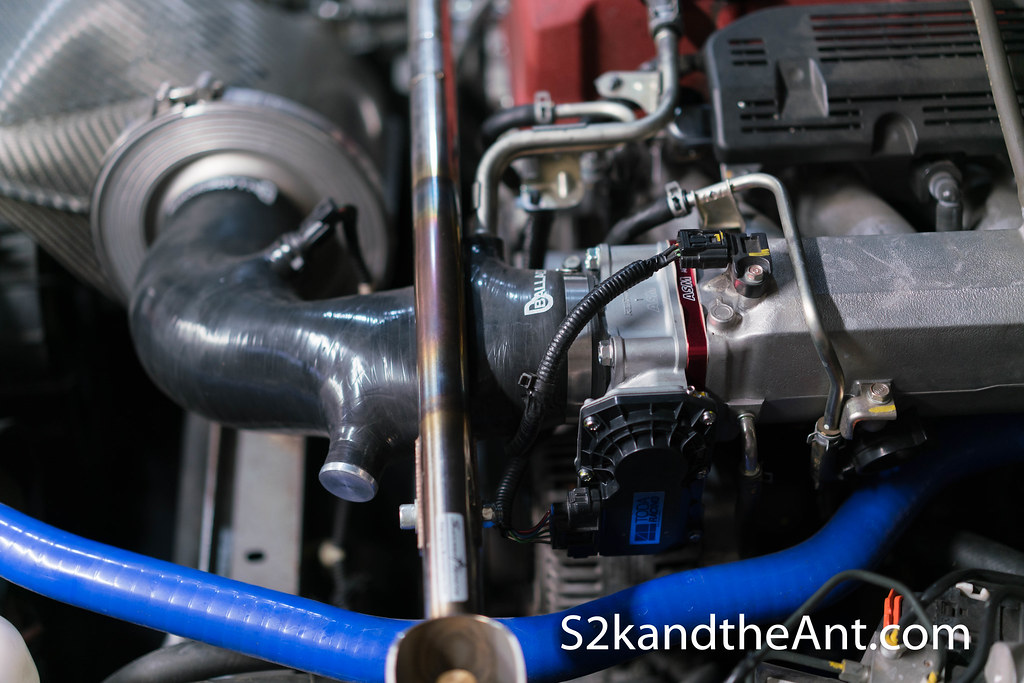 The intake arm is now rubbing against the ASM strut bar.  I believe if you retain the OEM arm, it does not do this.

Since we were already wrenching….. 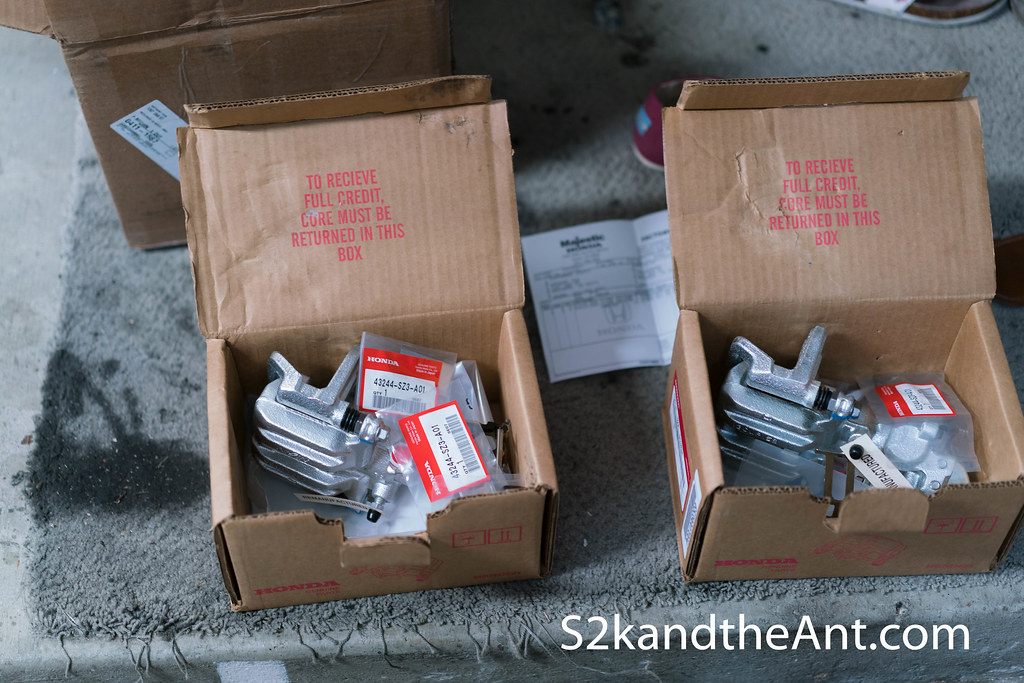 After we tackled the throttle body install.  We did a full fluid change, transmission, oil, and differential, and installed two new OEM remanufactured S2000 rear calipers….. 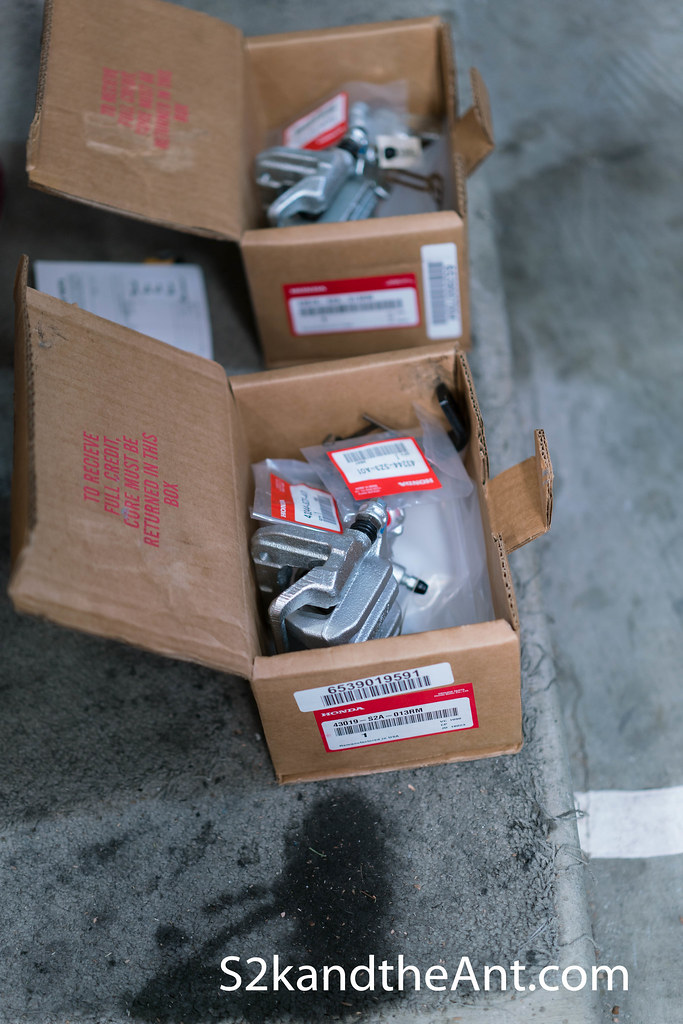 The finish alone is why this is better than autozone remanufactured calipers.  I noticed his recently installed autozone calipers were already rusting!  I believe he got these from Majestic Honda, a very popular online Honda dealership…. 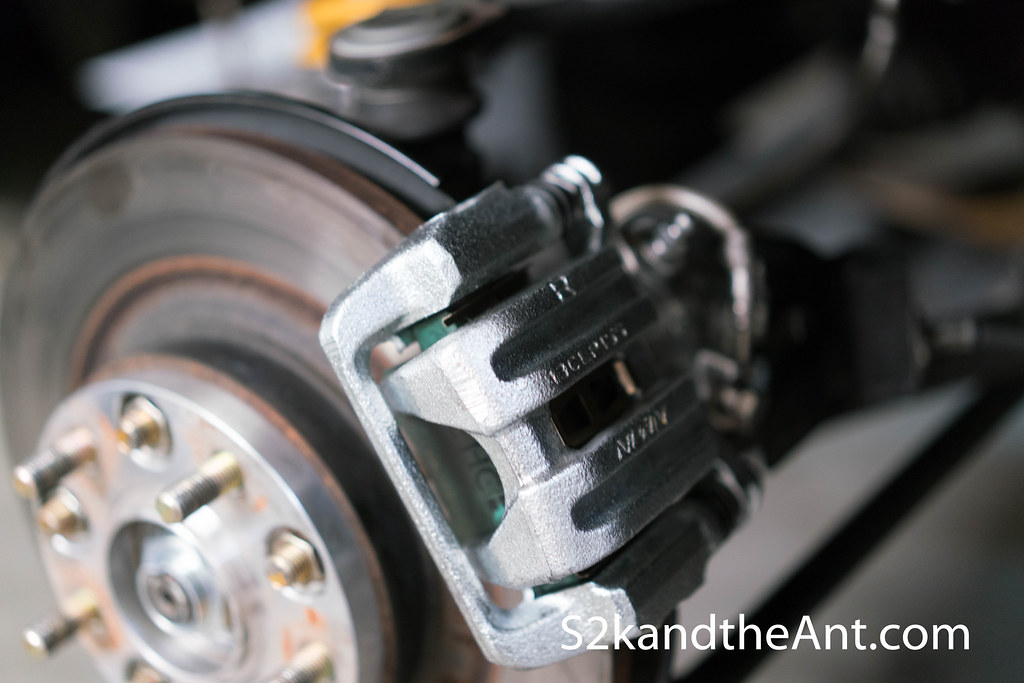 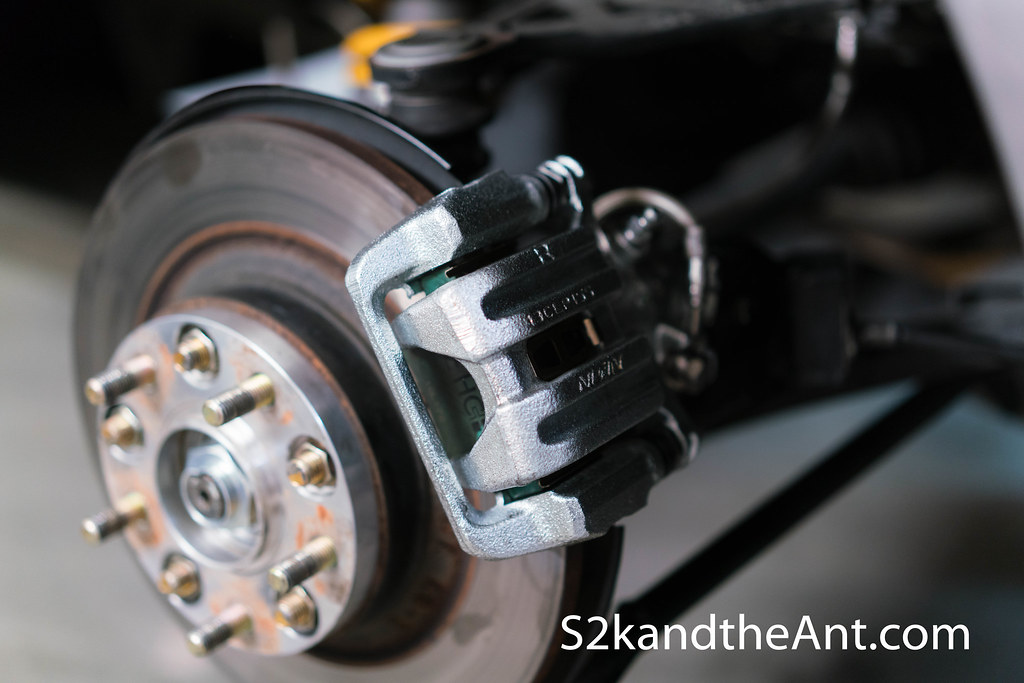 Nothing can beat new. 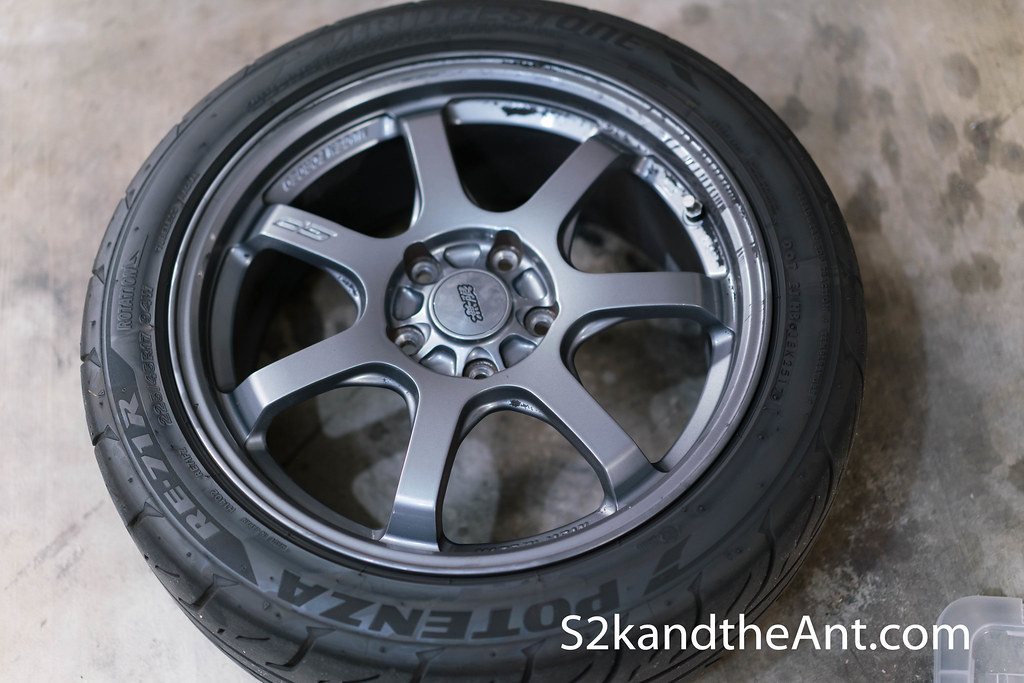 We were wrenching late into the night… I didn’t really take pictures of his car since I was getting pretty tired at this point.  But he is rocking some Mugen GP wheels.  Don’t see too many of these on cars nowadays.  I think we finished wrenching around 5am…. We started around 10pm. 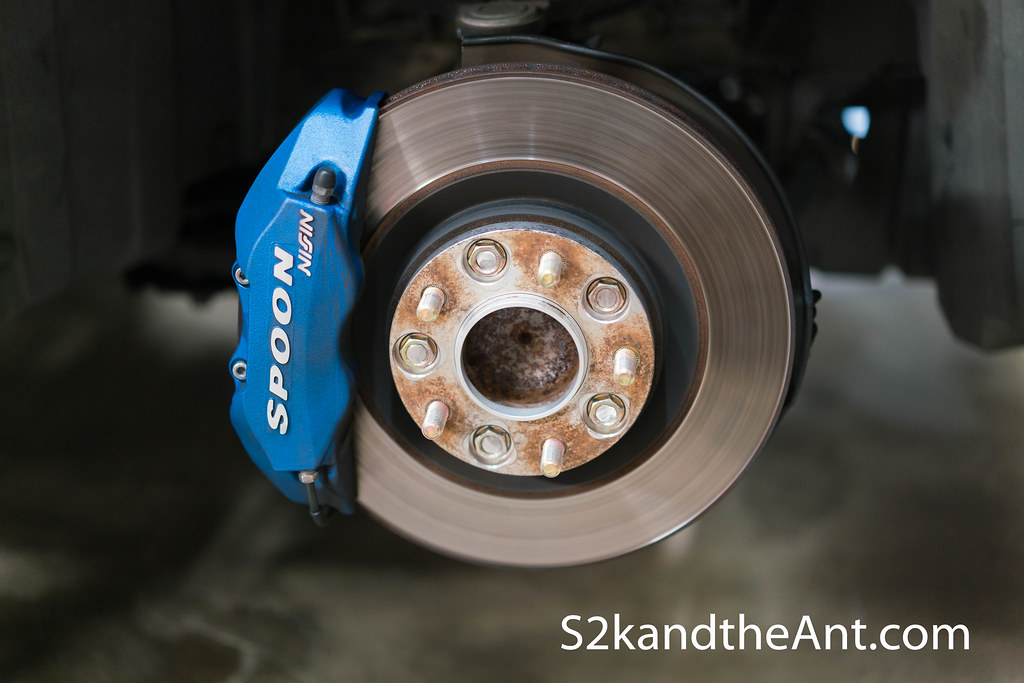 to finish off this post, check out his Spoon calipers! I took this picture right after I helped him bleed his brake system….  For spoon calipers, we bleed the inner bleeder first and then the outside bleeder.