Recently a friend of mine, pro-racer clement, took delivery of his 2017 Honda Civic Type R. It is pretty amazing that Honda brought their Civic Type R to the US shores…. although we all wish they did it years earlier! Maybe because all the enthusiasts that wanted an EK9 CTR back in the day when they were new are actually old enough and at a point where they can afford a 2017 model. I might be in the minority here, but I think the car actually looks good….. It’s 2017, so it has to have 2017 type styling.  Everything nowadays is derived from aerodynamics, so modern cars do tend to have similar lines.

We put the car on the dyno at Raceline USA to see what numbers it puts out…. This is the first time I made a video really, so check it out!

Final results, 280Whp when the engine is cold! and 282Tq!!!! crazy numbers, this puts it over factory rating. But after the engine warmed up, the whp was around 267. There is power to be made with some tuning, as with all turbo’ed cars. Clement gave me a ride in this car around the block, and it feels pretty quick, power is very linear, reminds me power wise like a tuned twin scroll turbo WRX. The car felt like it handled well, probably because Clement is a super pro racer haha.. 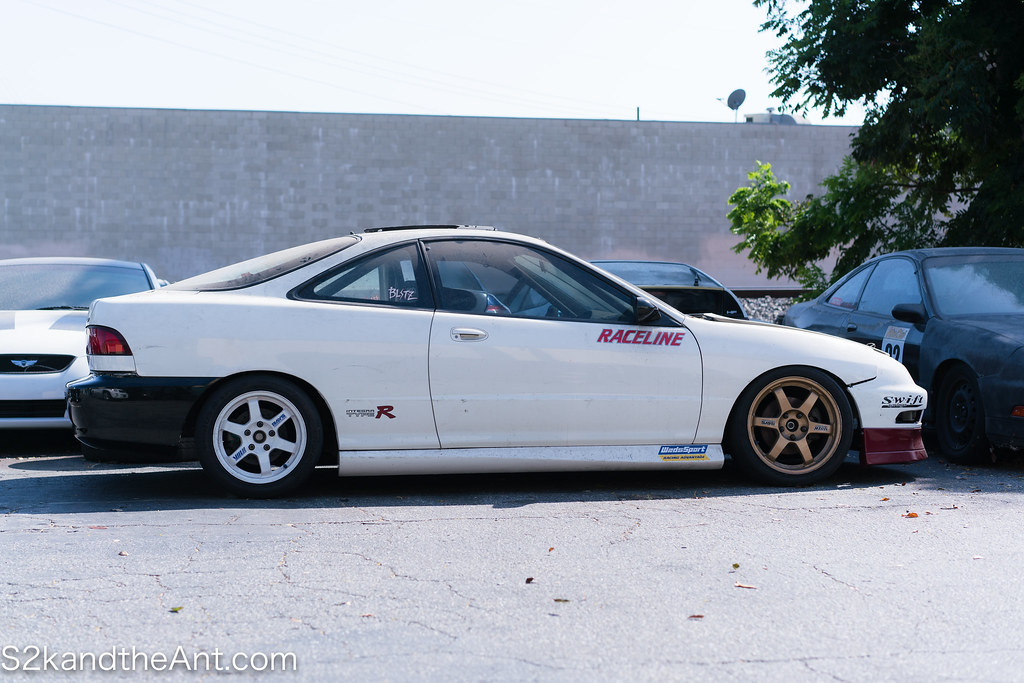 I can’t mention Raceline without this car.  Another Type R, the Integra Type R.  This car was actually in Hot Version American Touge 2.  I used to watch all of the Best Motoring International Videos growing up, American Touge was one of my favorite series, because it showed that American tuners can hang on with the JDM greats. 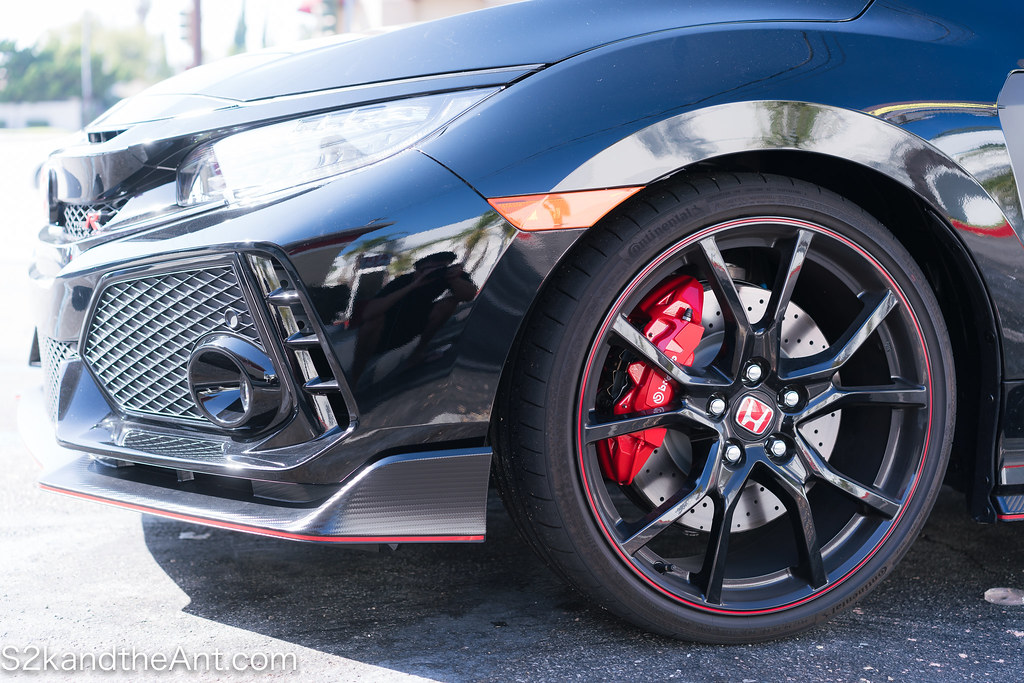 Haven’t taken car pictures in awhile….. so I forgot all about the polarizer.  I like the red stripe on the rim, reminds me of “Time attack Volks” from back in the day with red rings.  I love the massive Brembo calipers and LED headlights.  The car looks great in black. 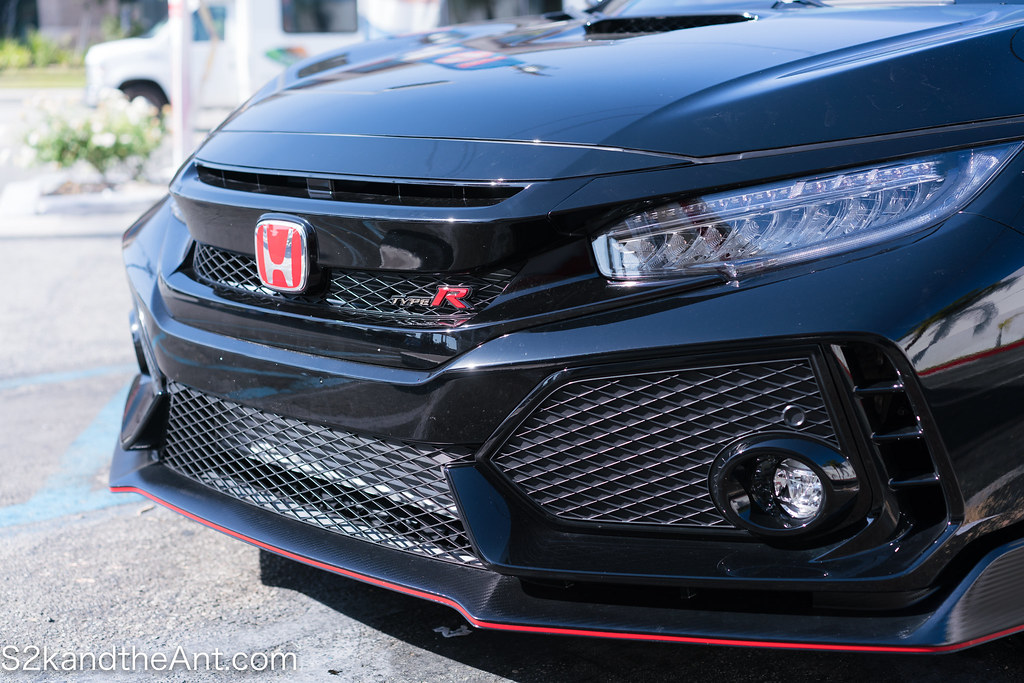 No the lip is not real Carbon Fiber…..”It’s a Honda not a Mclaren” as Elton said to me.  I wonder what Mugen will do when they come out with a Kit, maybe make all these fake honeycomb grills real!?!? 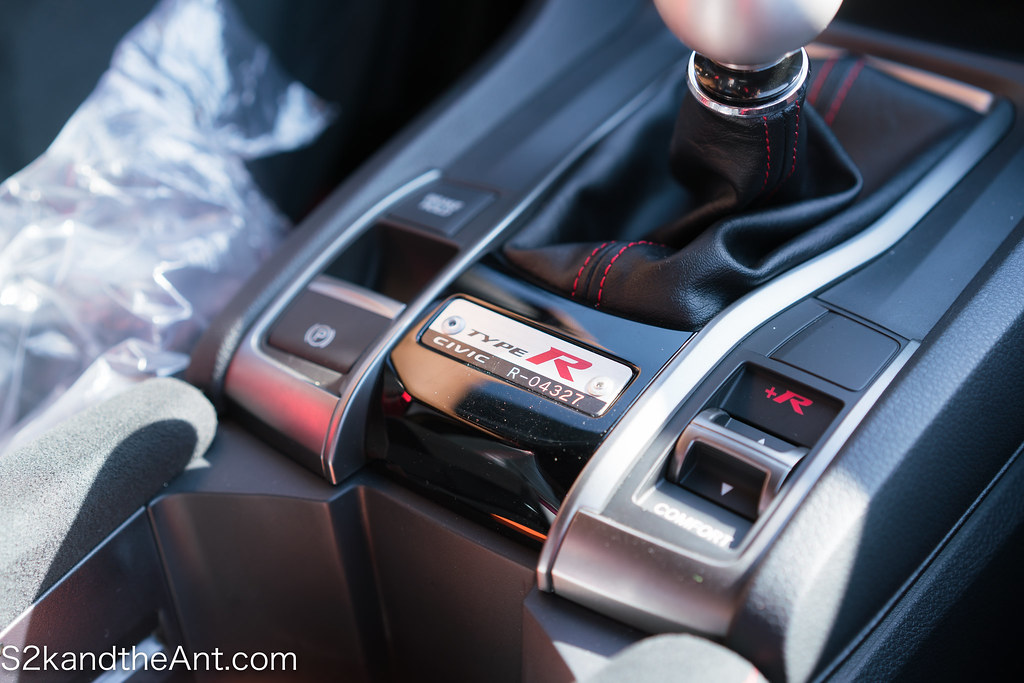 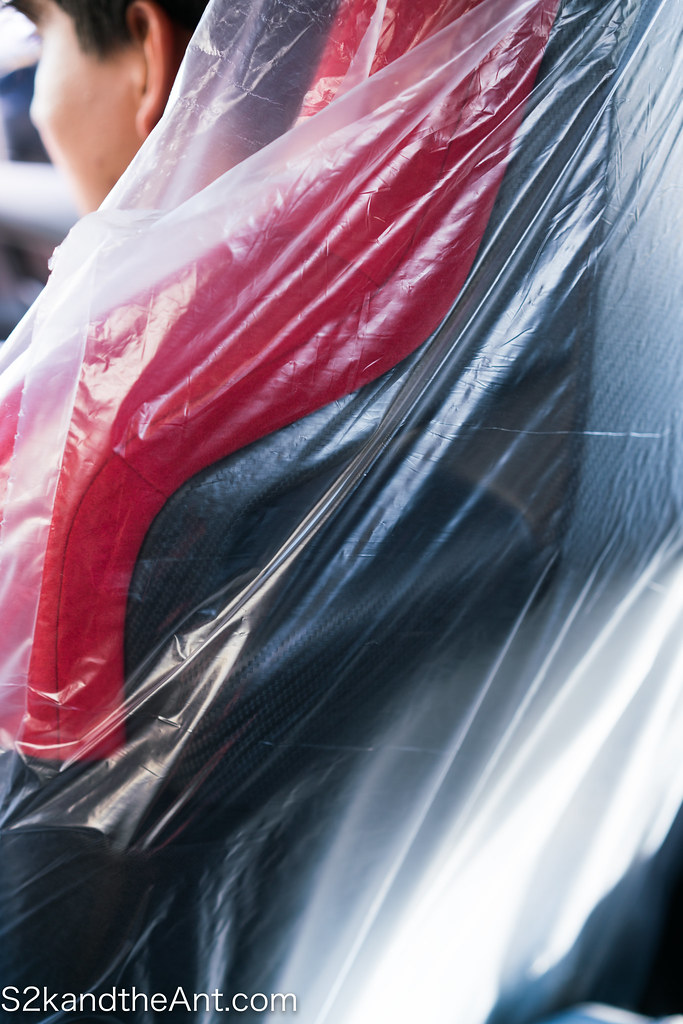 Carbon fiber backed bucket seats!!! Although I heard this is faux Carbon Fiber also.  The buckets were thick and supportive. 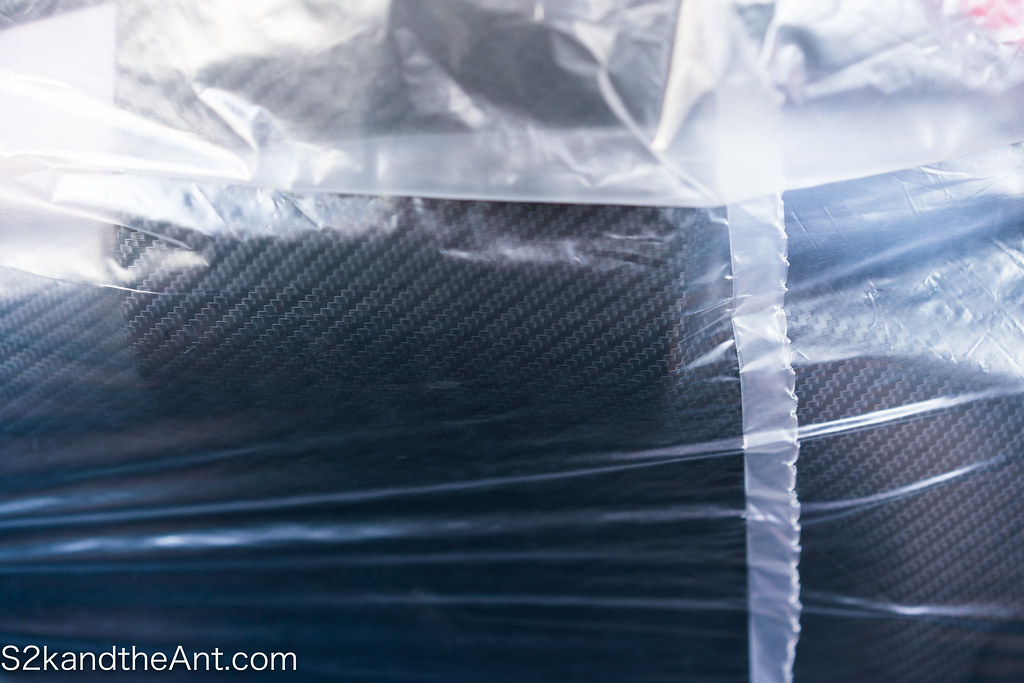 True Asian style, he kept the plastic on the seats. 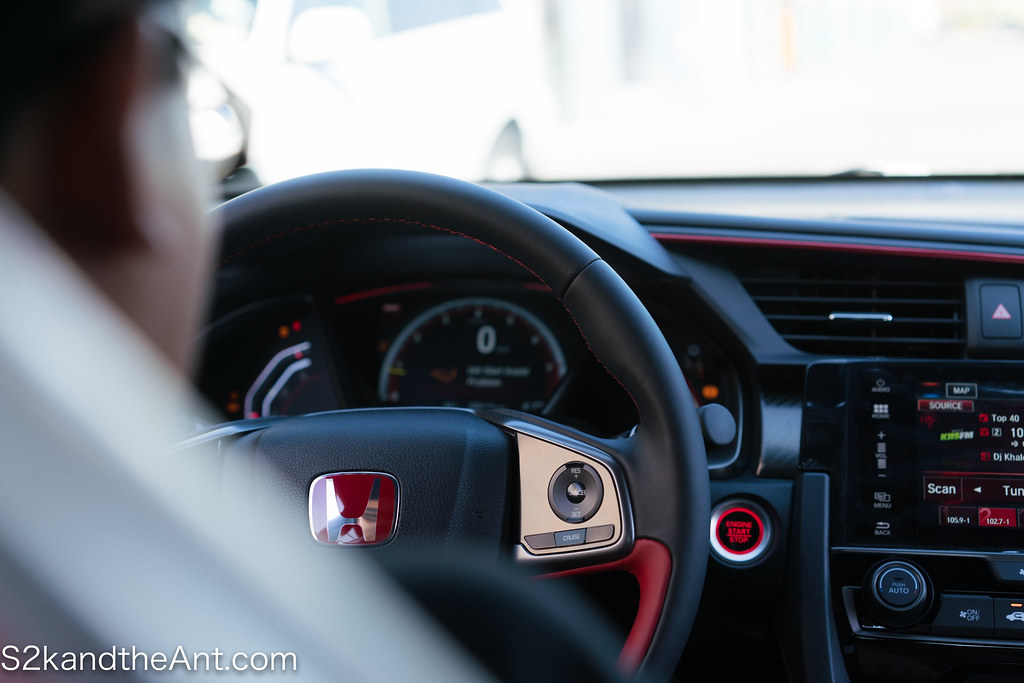 The Cluster is an LCD display.  I wonder how this will look 10-15 years later?  I prefer analog needles myself…. I even dislike the S2k cluster….. But having a single LCD display does make sense for packaging reasons, you can jam a lot more information on the screen. 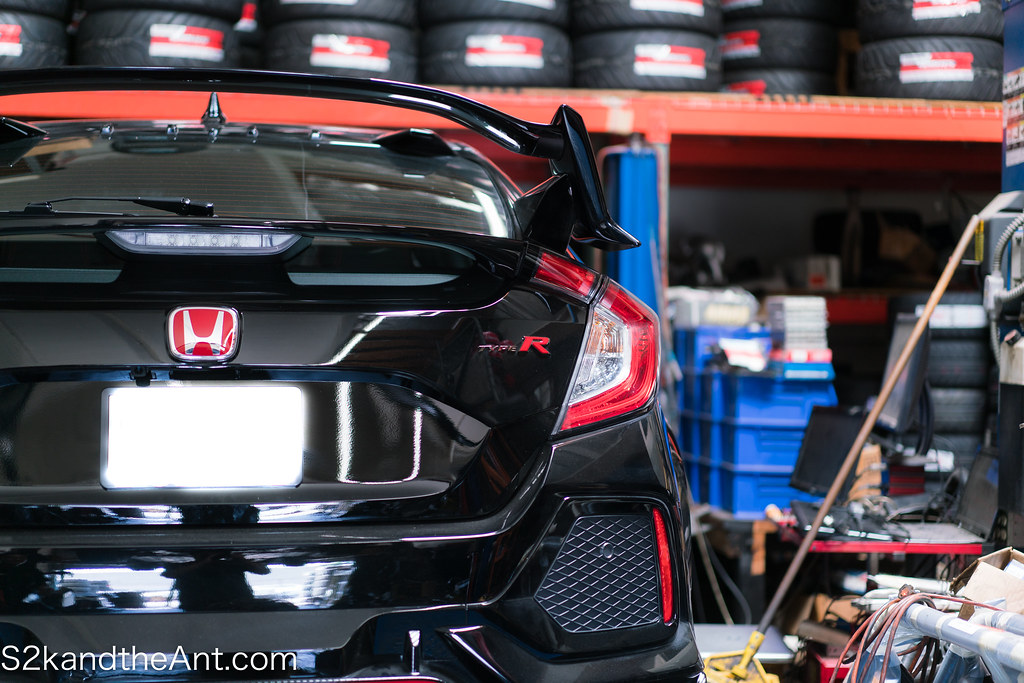 Strapping the car on the dyno. 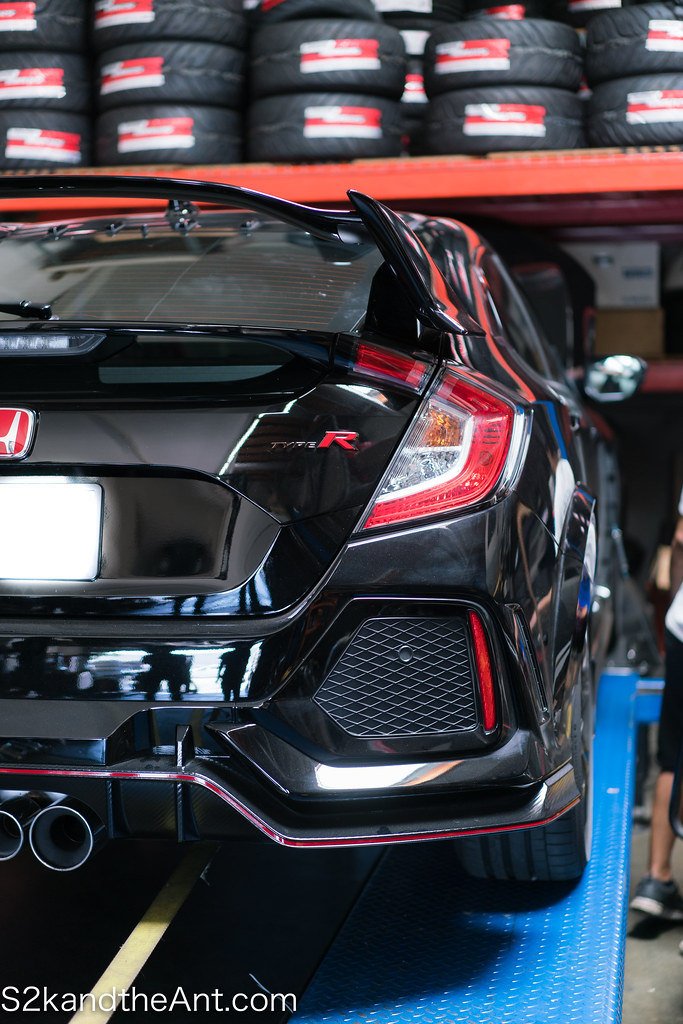 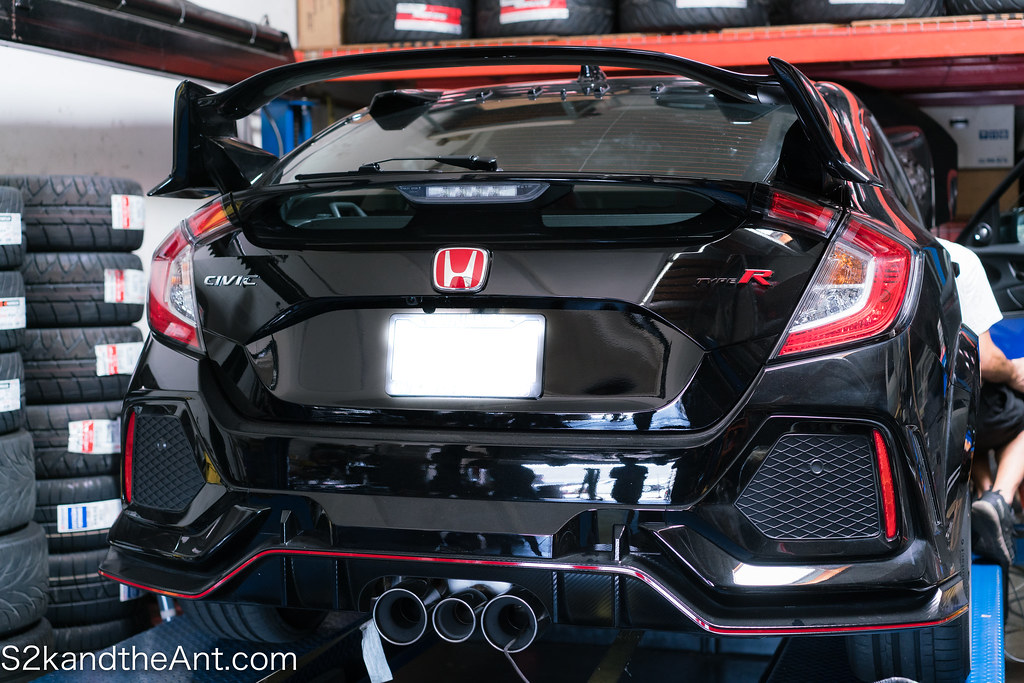 Dual exhaust tips with a 3rd tip for the wastegate dump!  Most likely taking inspiration from the Ferrari F40. 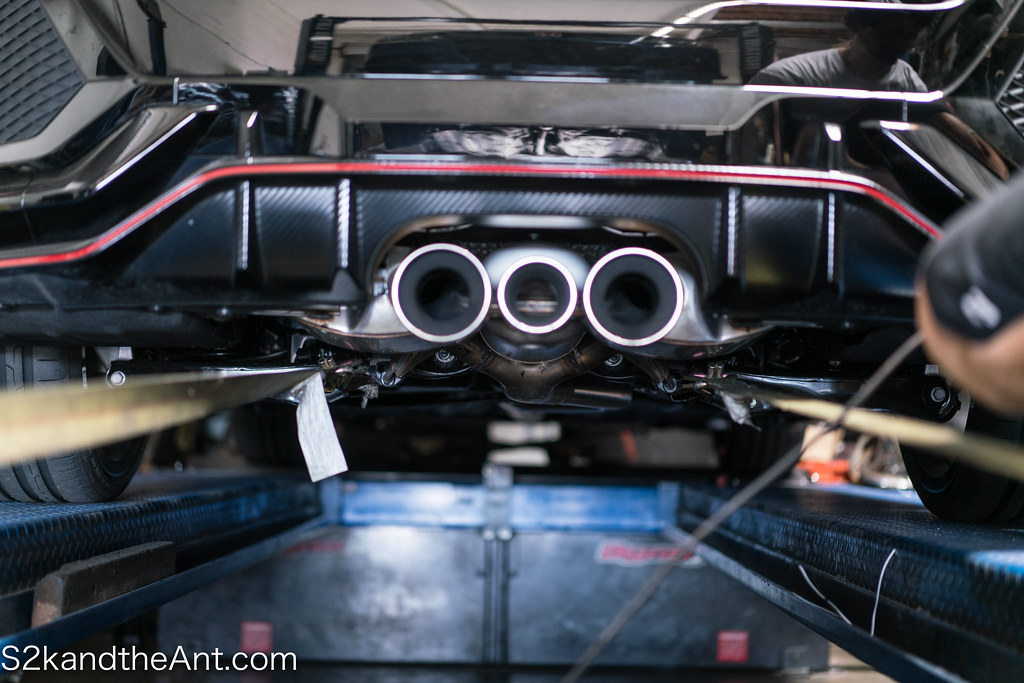 A quick peak under the triple exhaust 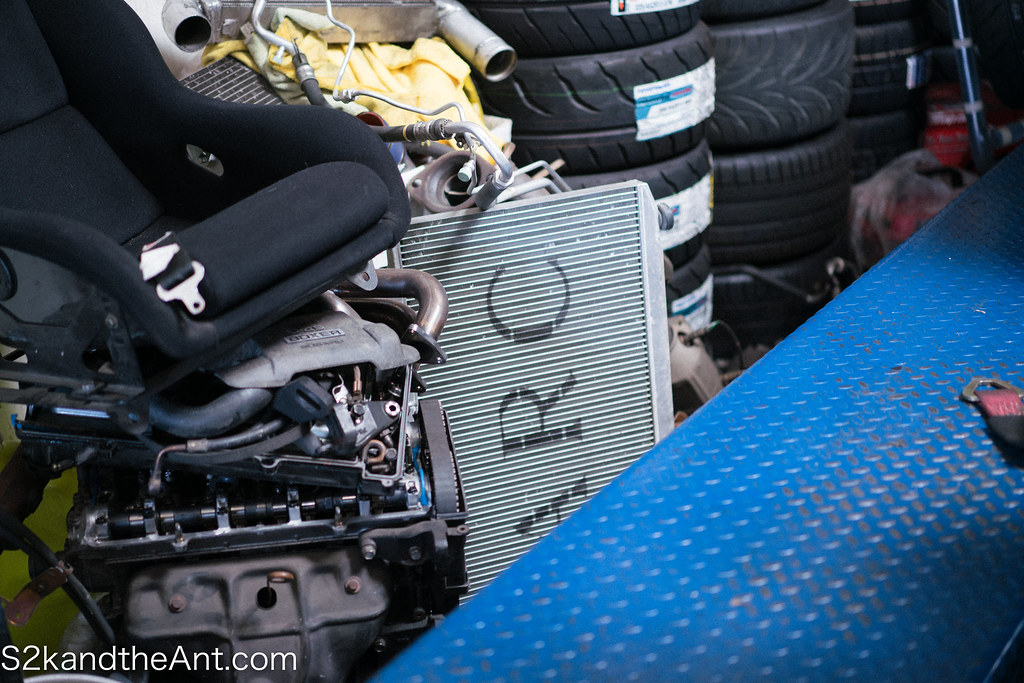 Amazes me how Elton has all this random JDM stuff all over. Like this ARC radiator! It looks S2k sized too! 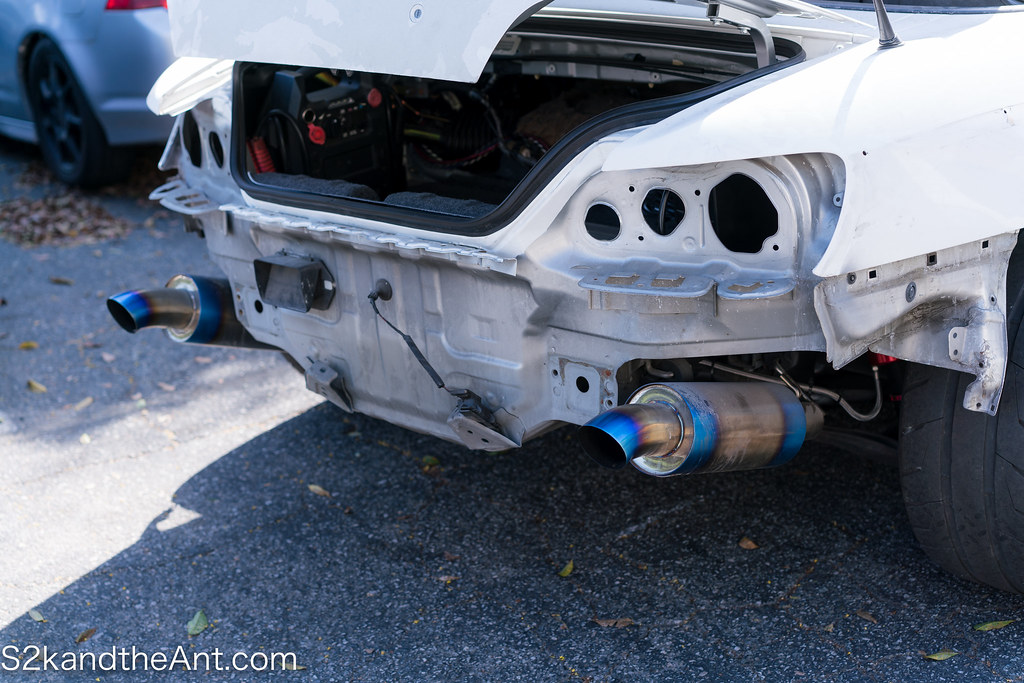 I took a look outside…. This S2k Elton was working on caught my eye.  First thing I noticed were the J’s Racing exhausts that were mounted high.  Clement said this car has a J’s Kit on it usually. 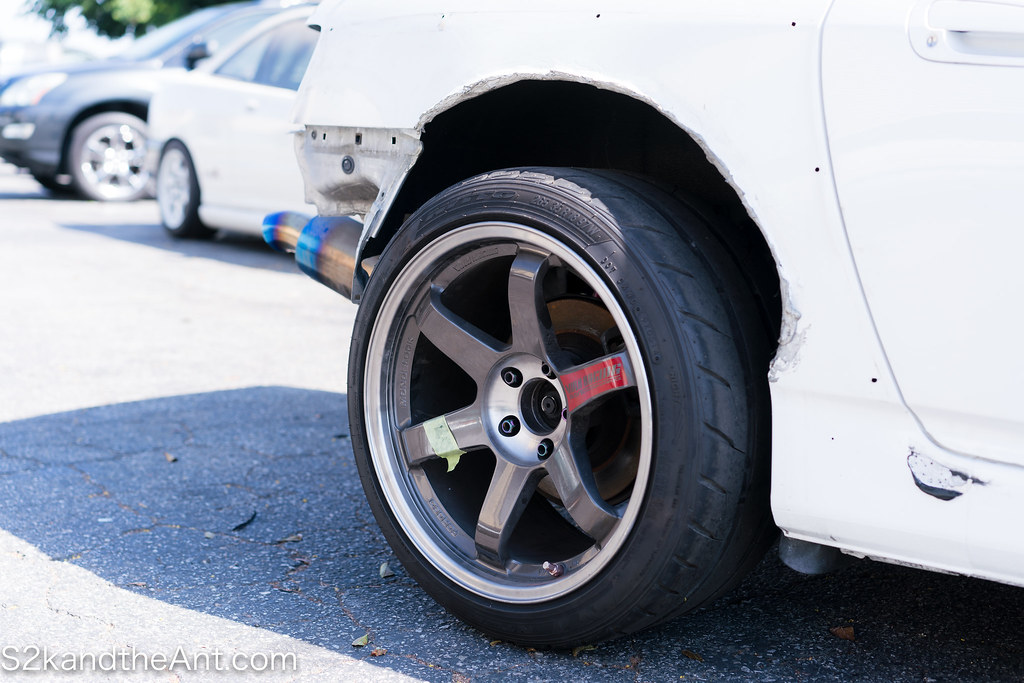 Volk TE37SL and missing Over Fenders. 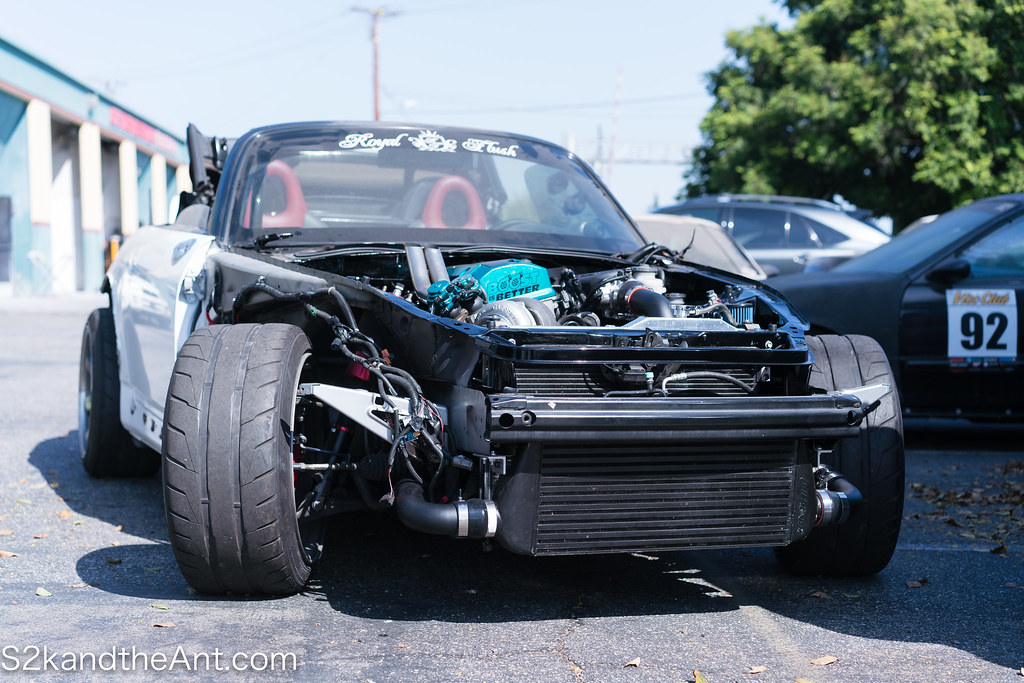 I couldn’t help to notice the crazy Twin Scroll Turbo setup.  I was told this car has a f24 stroker in it. 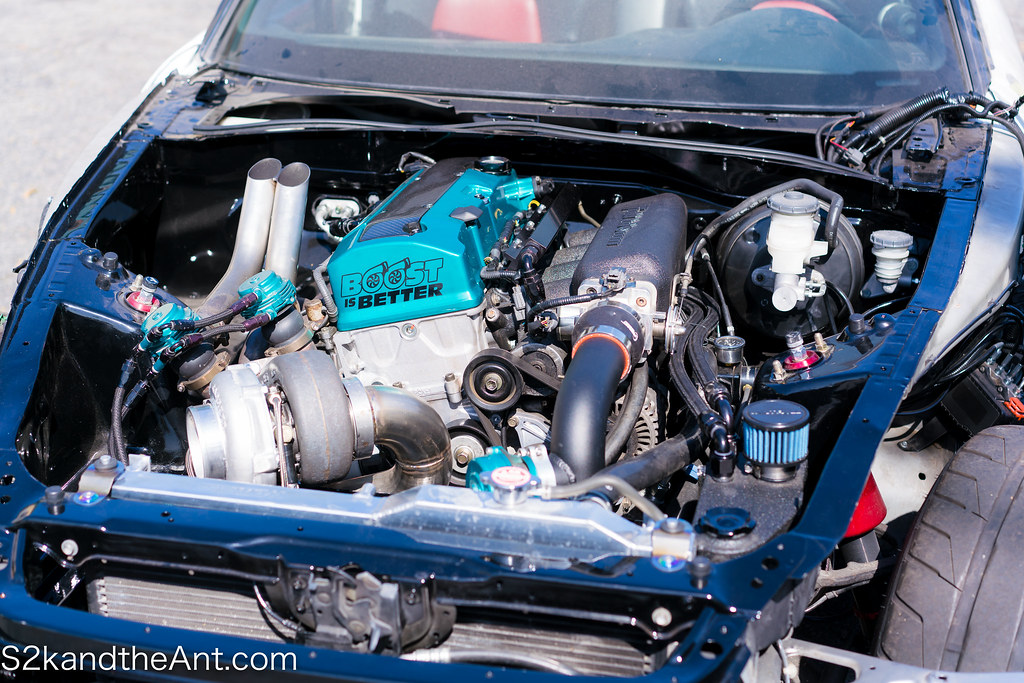 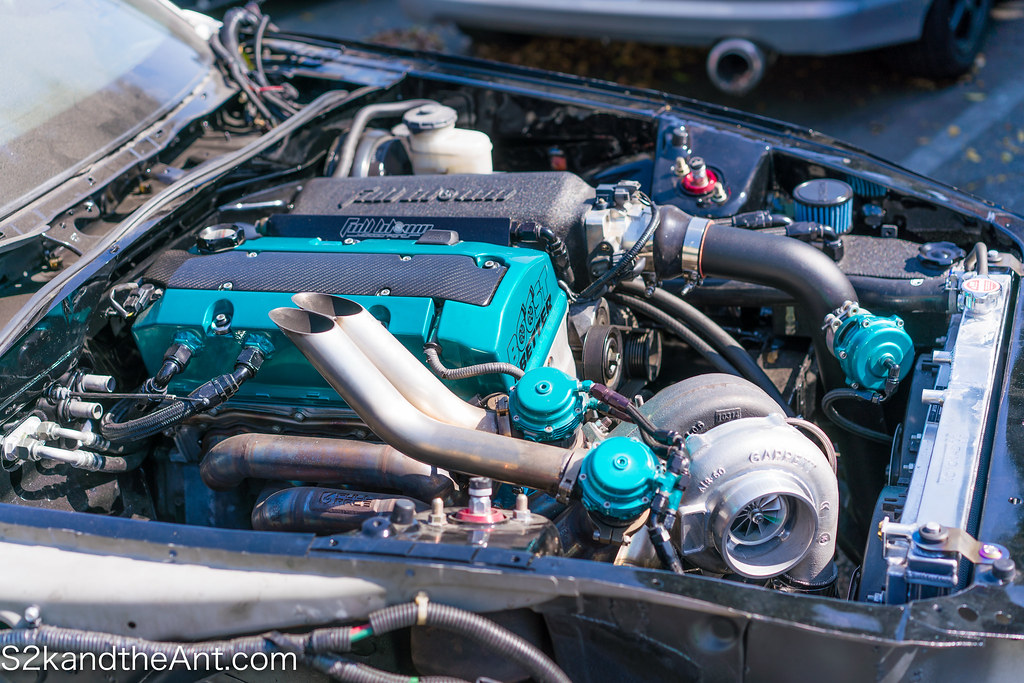 It looks like this is rocking a Full Race manifold and Fullblown intake manifold.  I don’t know too much about Turbo setups unfortunately… 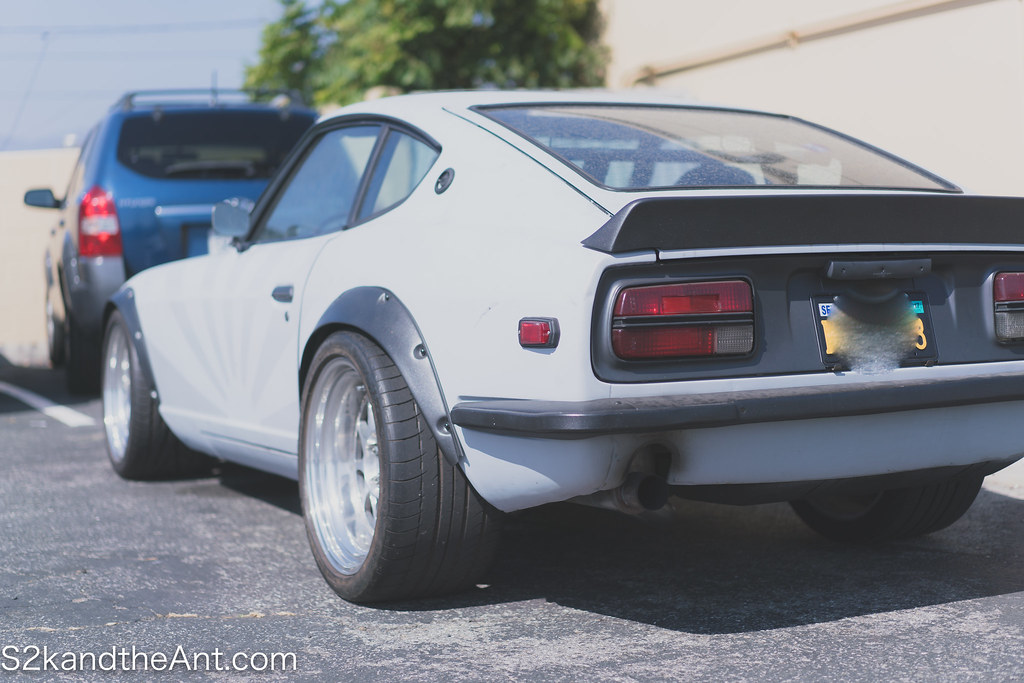 Another interesting car I saw in the parking lot was this 240z…. 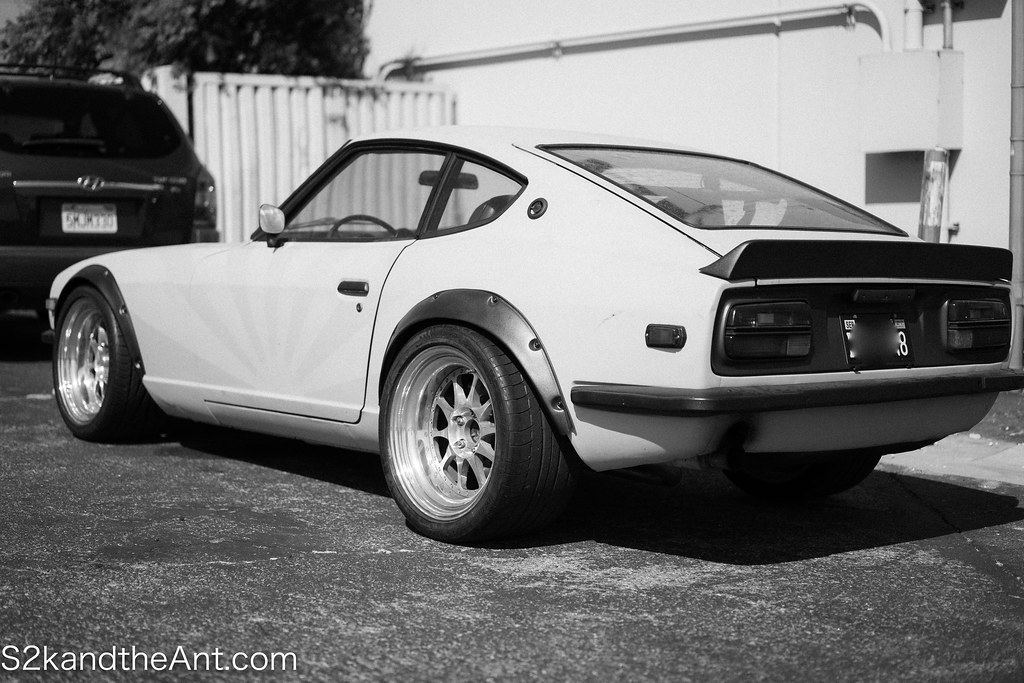