I’m a big JDM fanboi, nothing new about that.  Being the JDM fanboy I am, I’m constantly searching  the web for new JDM tuning developments regarding the S2000.  I’ve looked through my HyperRev issues front to back more times than I can remember.  I couldn’t help to notice that many JDM tuners use parts that we, the USDM tuning scene, simply haven’t thought of yet.  Such as racing sized AC condensers that Stradale uses, which are half sized AC condensers so the radiator can receive better cooling while driving. A few USDM tuners take these “unheard of” JDM ideas are turn them into “original ideas” *ahem ahem *Ballade Sports *SakeBomb Garage… yeah those Ohlins lower perches or RX8 rear calipers are real original ideas dudes……

An item of tuning I noticed that a few JDM tuners are implementing is the TRD Door stabilizers retrofitted to work with the Honda S2000.  TRD, is obviously a Toyota branch (some would say the Mugen of Toyota (kidding not kidding)), so this is made for Toyota models like the BRZ/FRS/GT86.  This one in particular is the one not made for the BRZ but for every other Toyota model such as the Altezza, Celica, AE86….. model number MS304-00001. This would actually fit my Lexus LS430 daily driver. 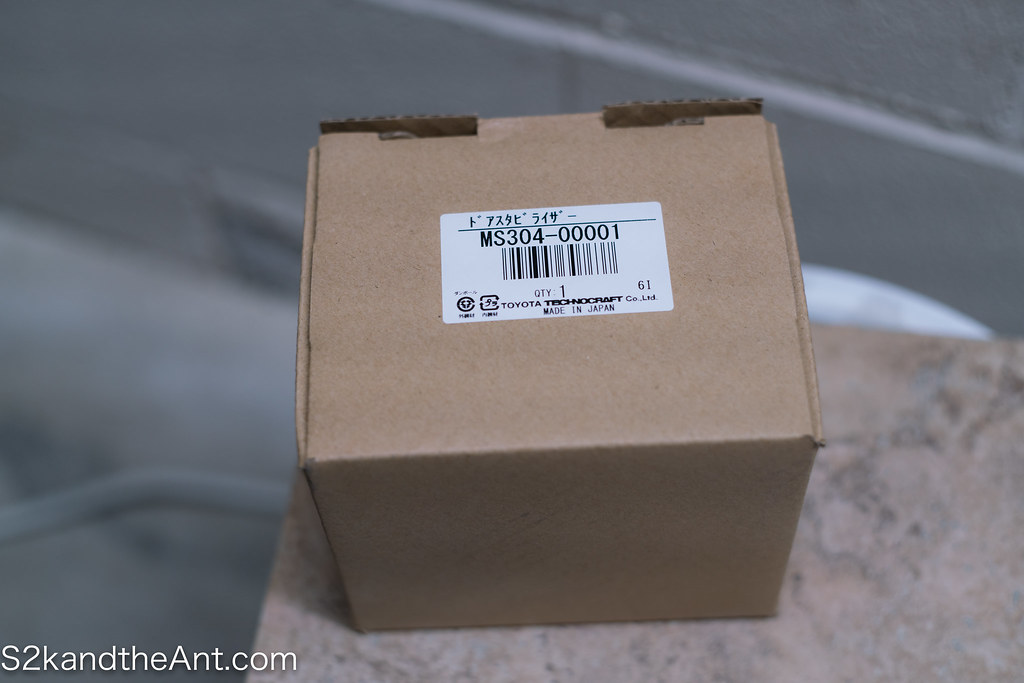 All the way from Toyota Technocraft! 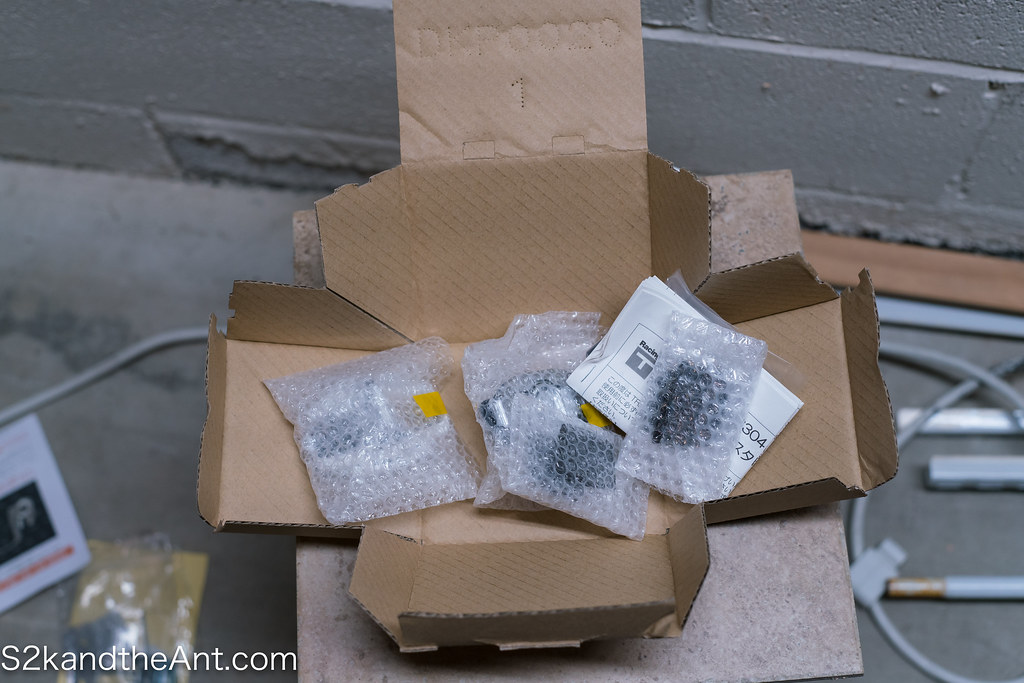 Unboxing of the TRD door stabilizers 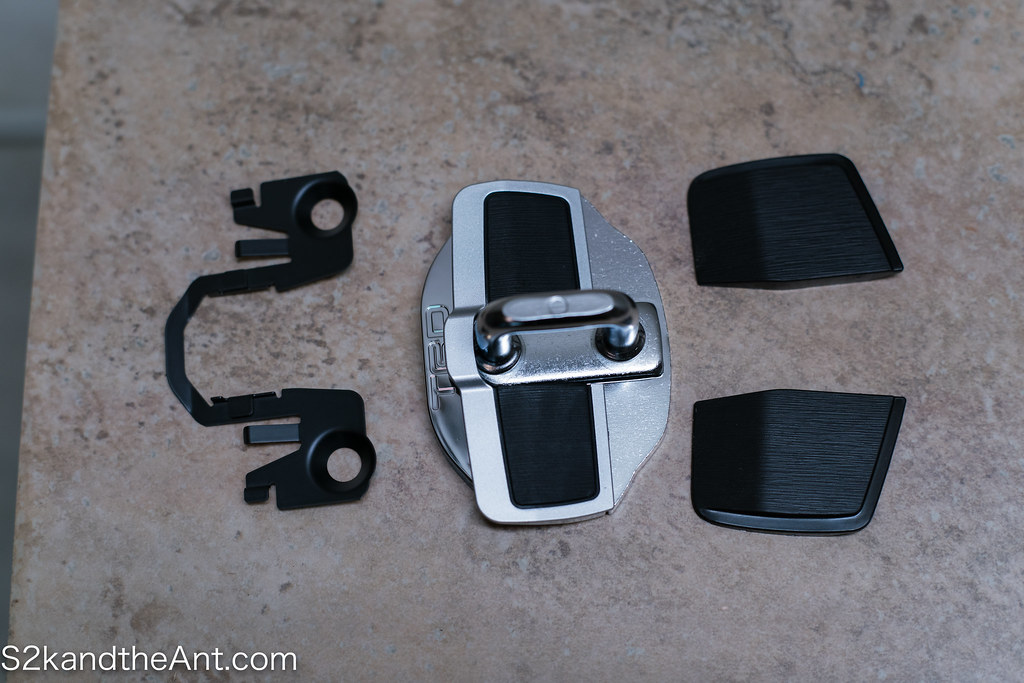 All laid out….. On a Toyota/Lexus vehicle, all you have to do is bolt in and you’re off to the races…..

There are many ways of mounting the TRD Door Stabilizers to the S2000. I personally went with the CSOhara kit, or Creative Service Ohara. I found their products listed in my Hyper Rev Magazine and checked out their website. I used an importer to import me the kit. The Kit comes with instructions completely in Japanese. My Japanese is horrible, but it comes with pictures and you can find walkthroughs of people installing the kit on Minkara. I added links on the bottom of the page if you wanted to see how other people installed the door stabilizers not using the CSO bracket. 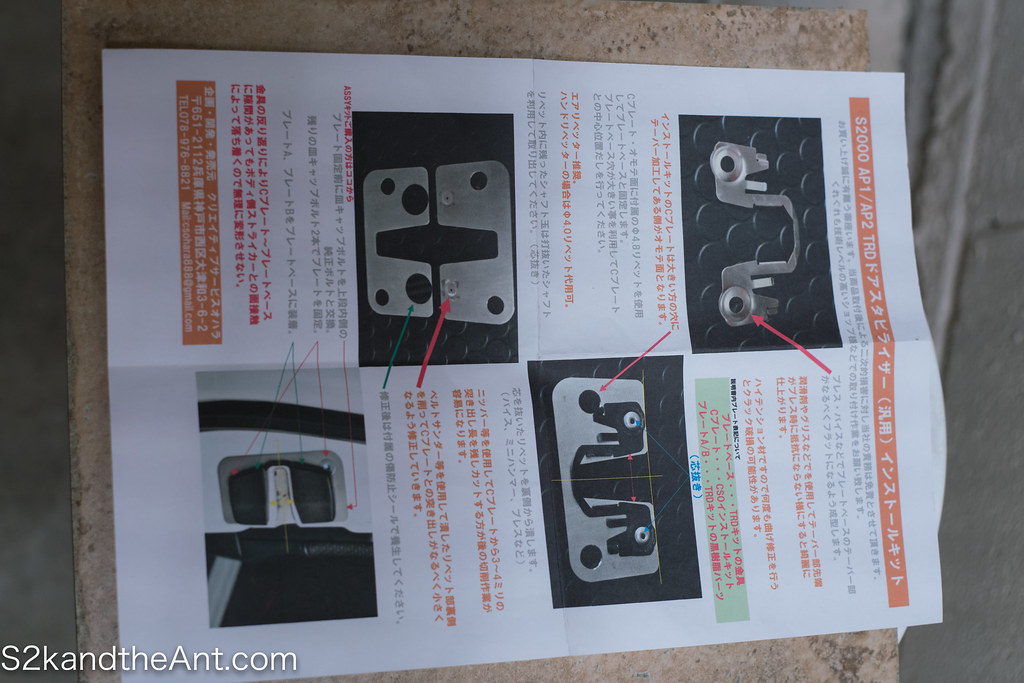 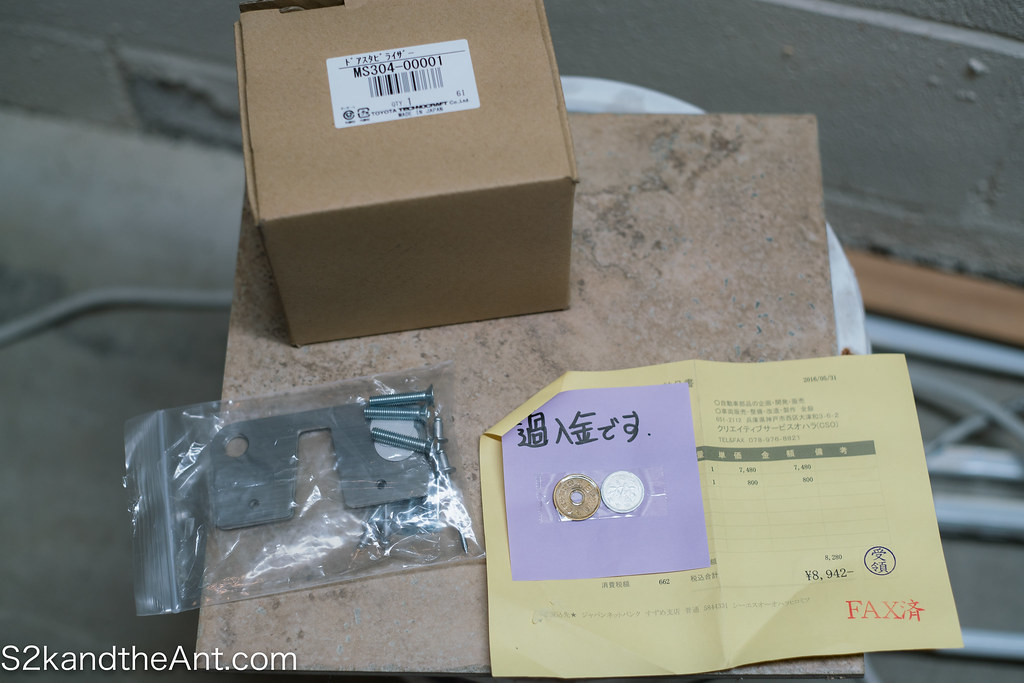 What the CSO kit comes with, two brackets, some allen head bolts, rivets, and stickers to cover the holes.  I think why there is coins taped to the paper is because my importer overpaid, and they are giving me the difference. 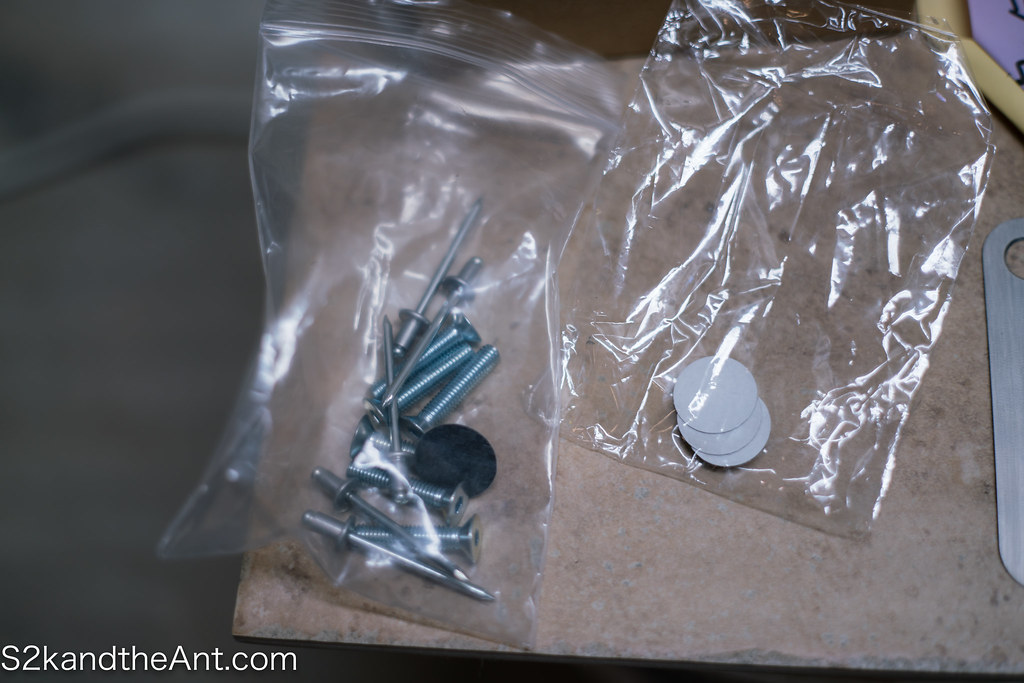 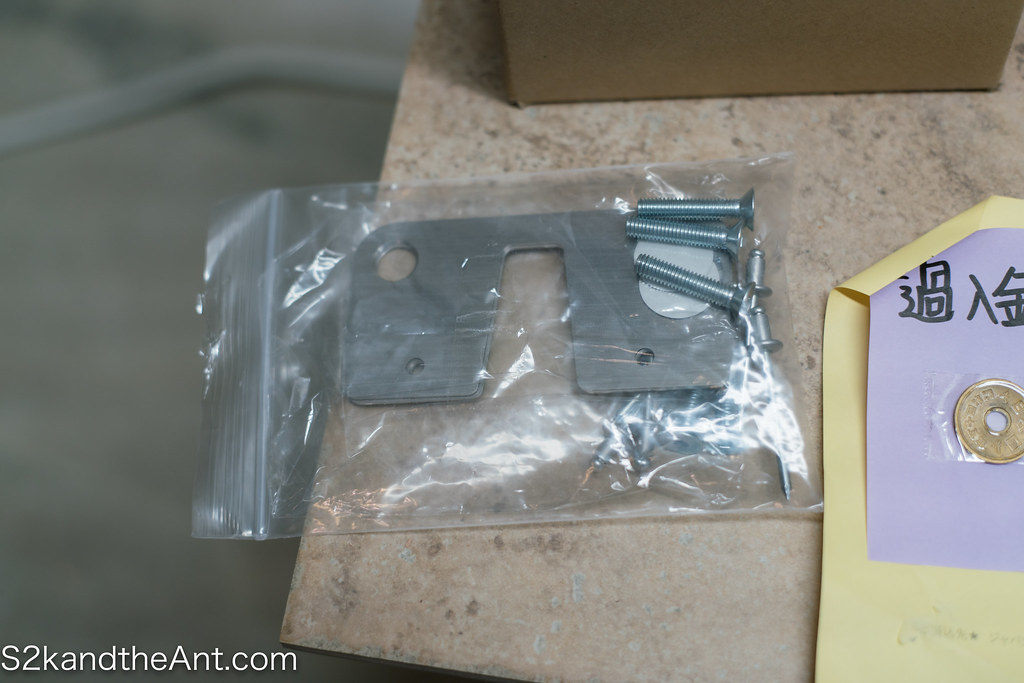 To prep everything, remove the OEM S2k door hinge.  Unscrew the pillips head bolts attaching the OEM bracket, use an impact screw driver since those puppies are on tight! A few whacks and I was able to get this off, it would definitely suck to strip those phillips head screws! 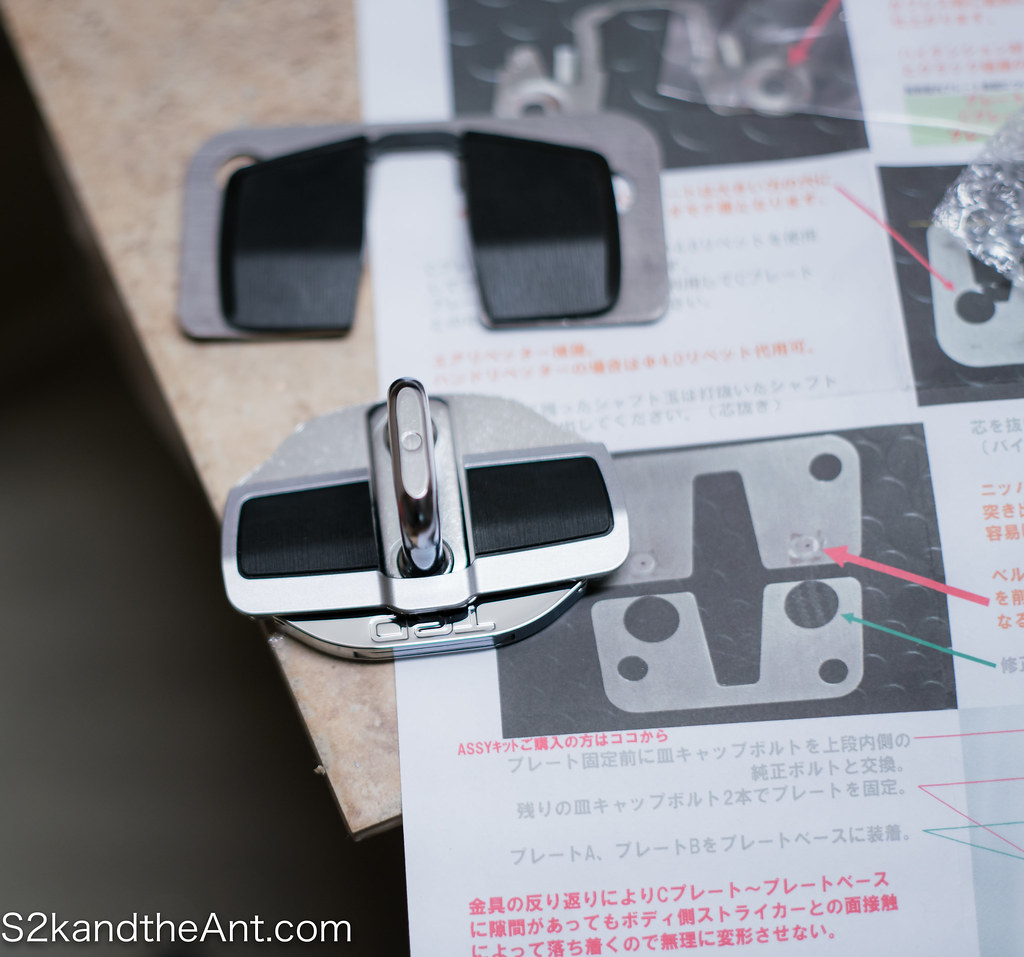 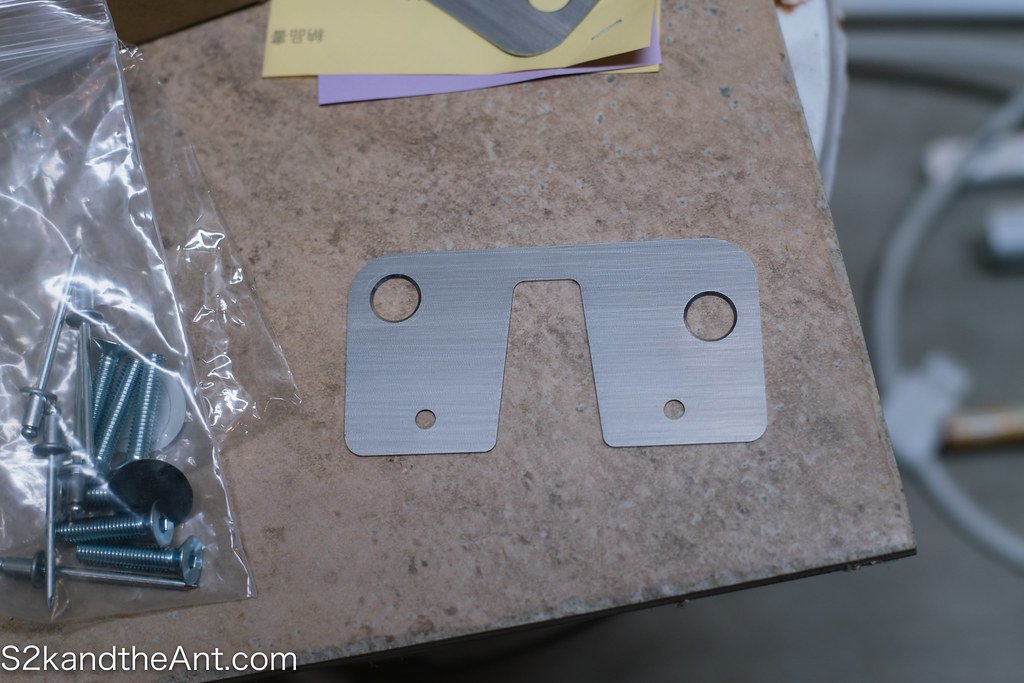 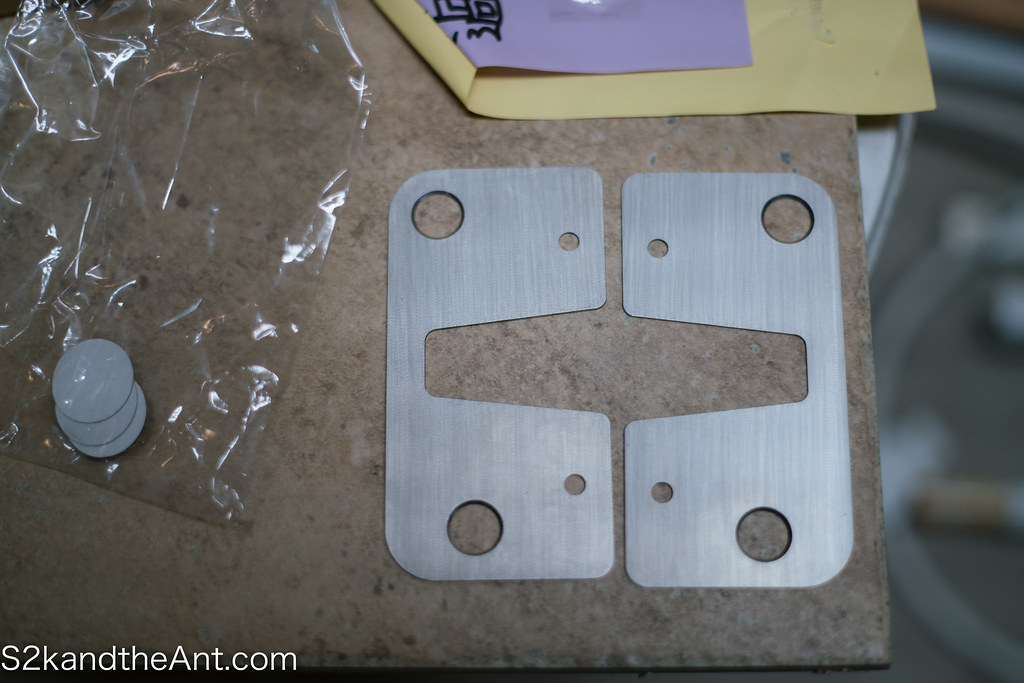 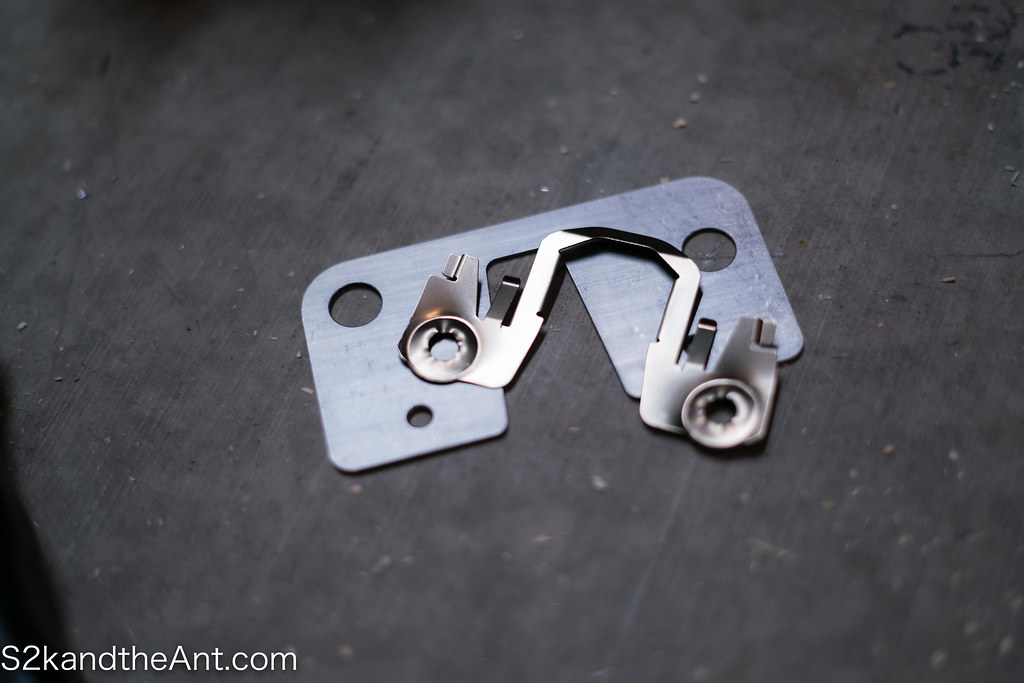 First, you have to smash the raised portion of bolt hole on the TRD door stabilizer bracket, you want to make this as flush as possible. 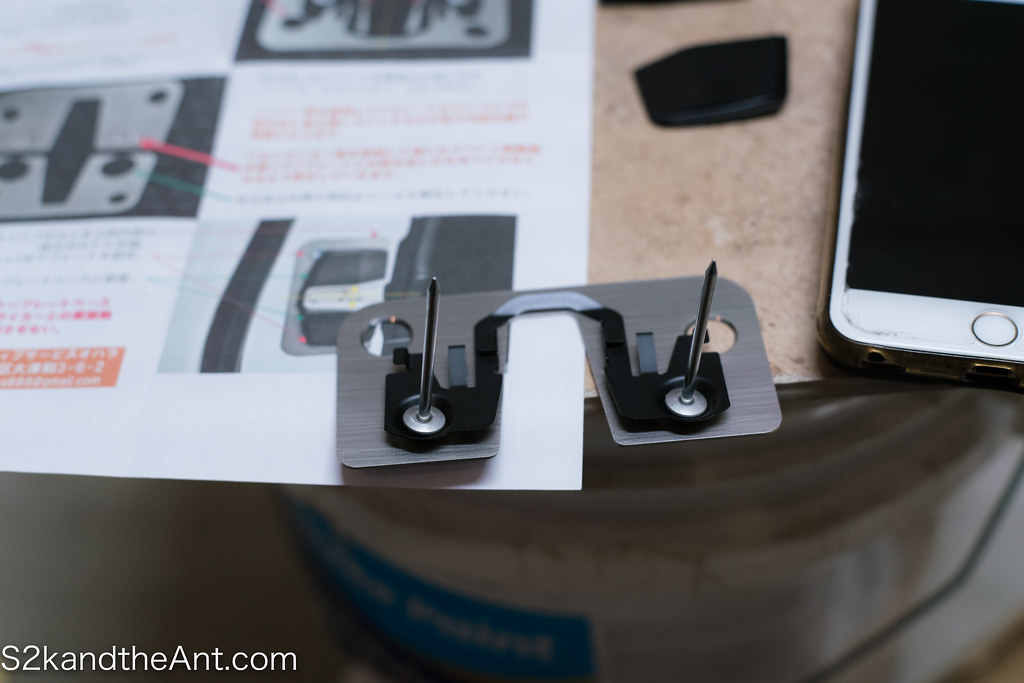 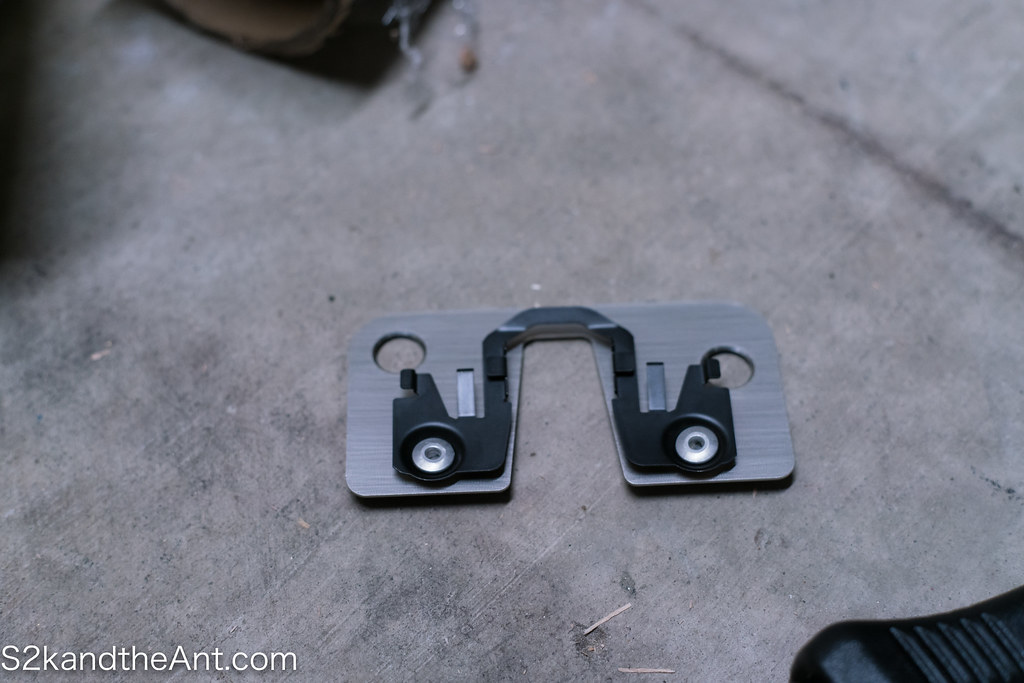 Next you rivet the TRD door stabilizer bracket into the bracket from CSOhara. 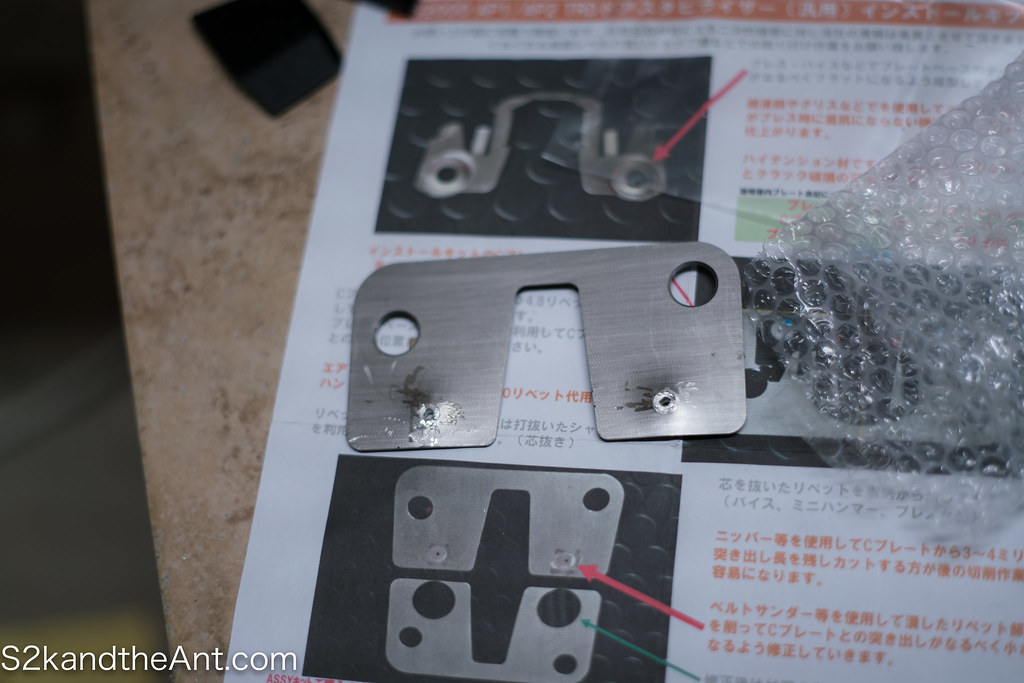 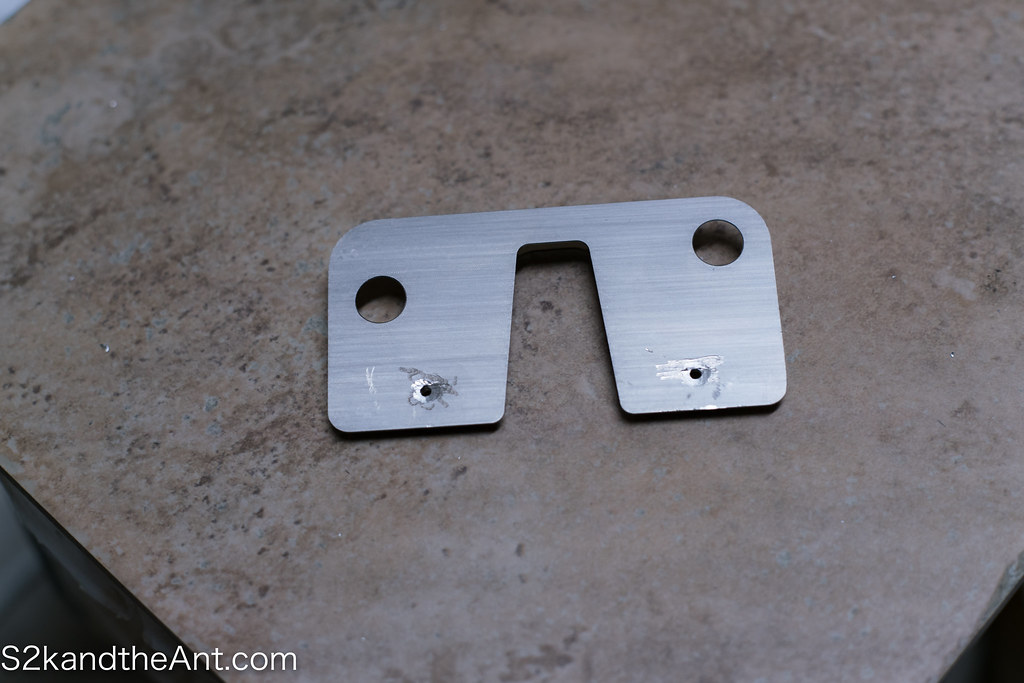 After you rivet the bracket on, you have to flip it around and grind down the rivet so it is flush with the CSOhara bracket since this sits flush on your door. 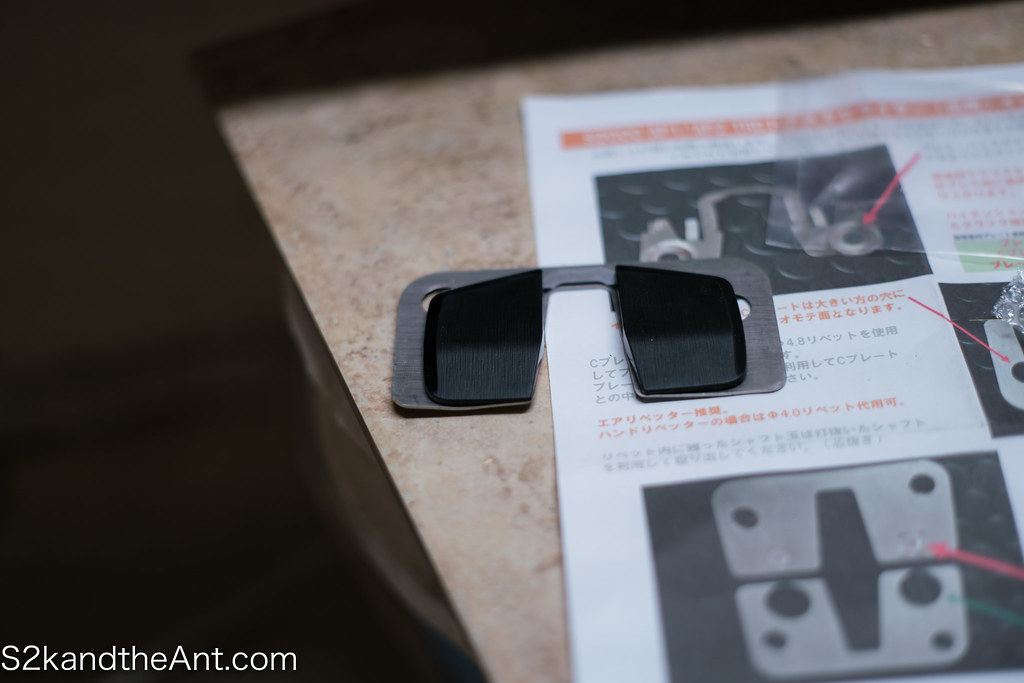 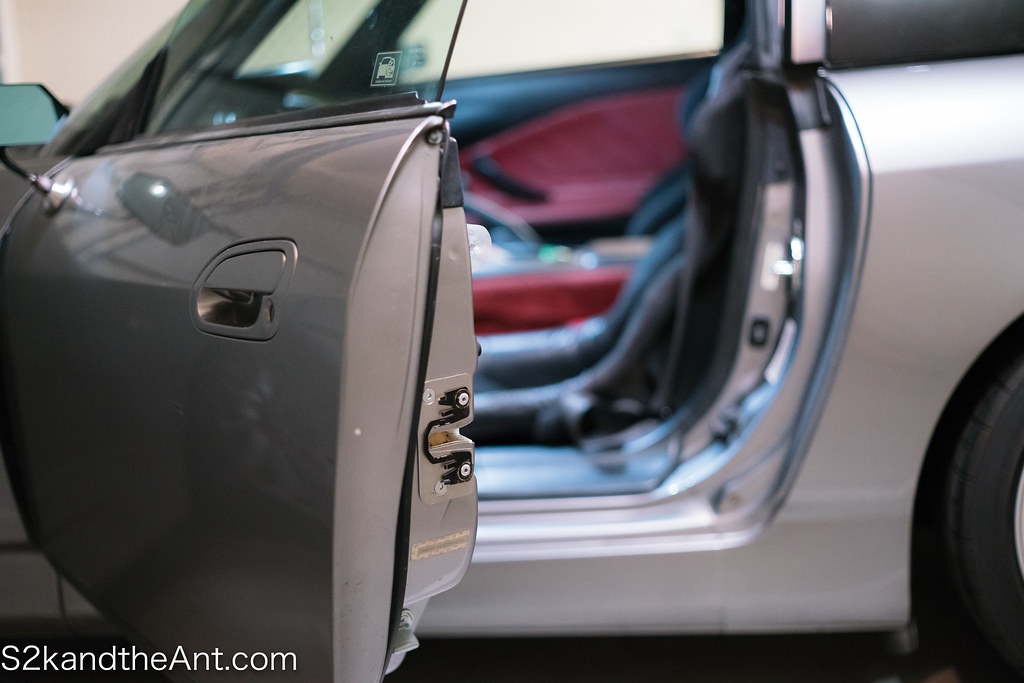 Bolt in the CSOhara bracket to the S2000 Door with the supplied allen Head bolts….. 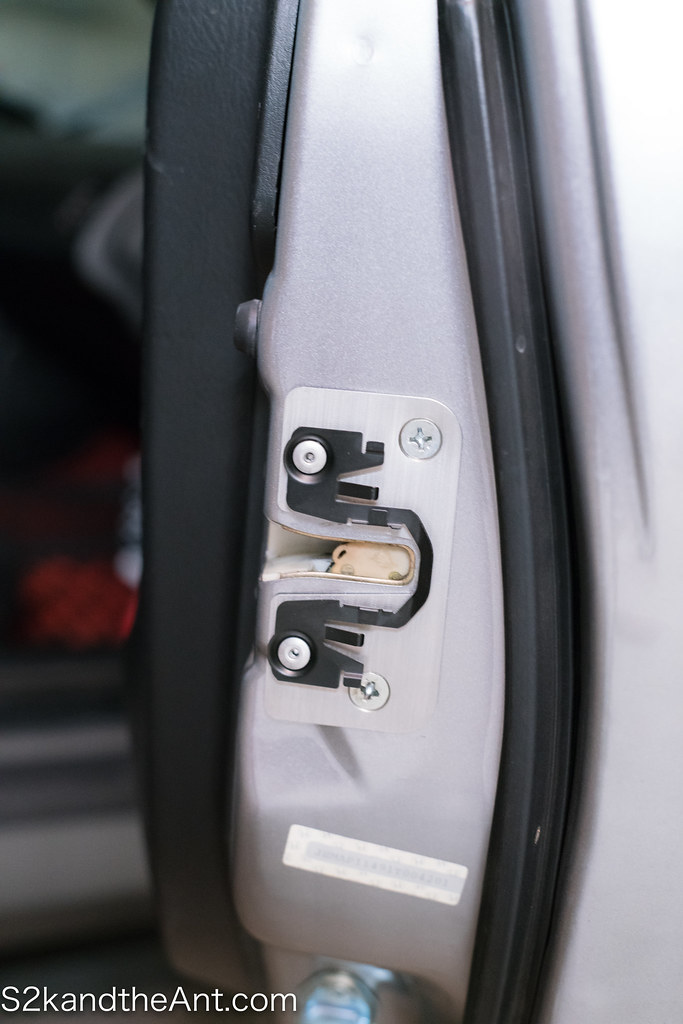 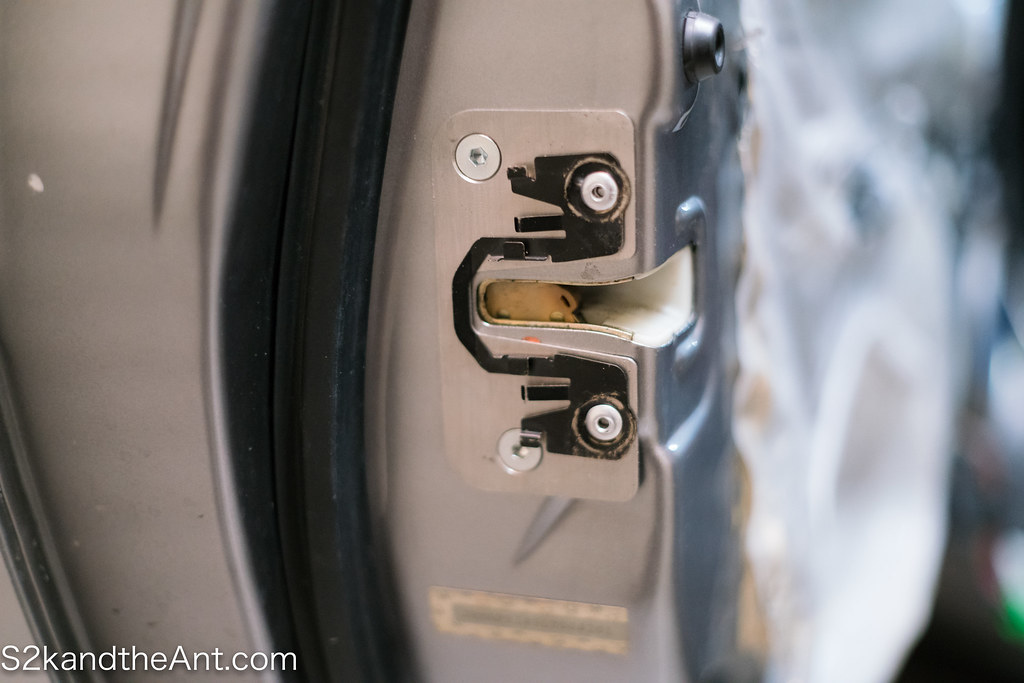 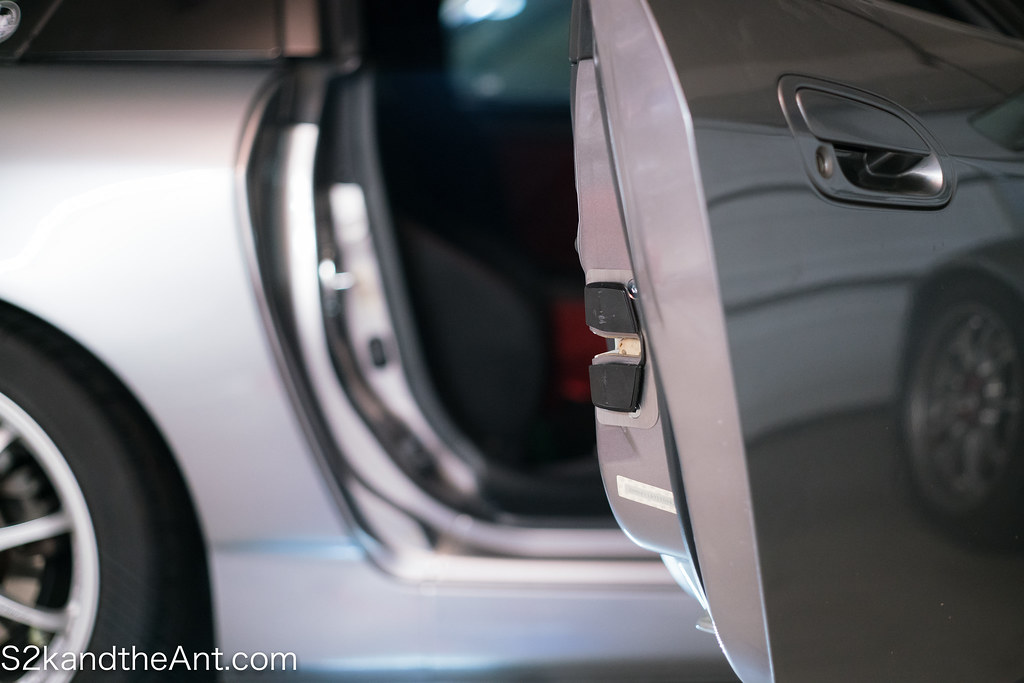 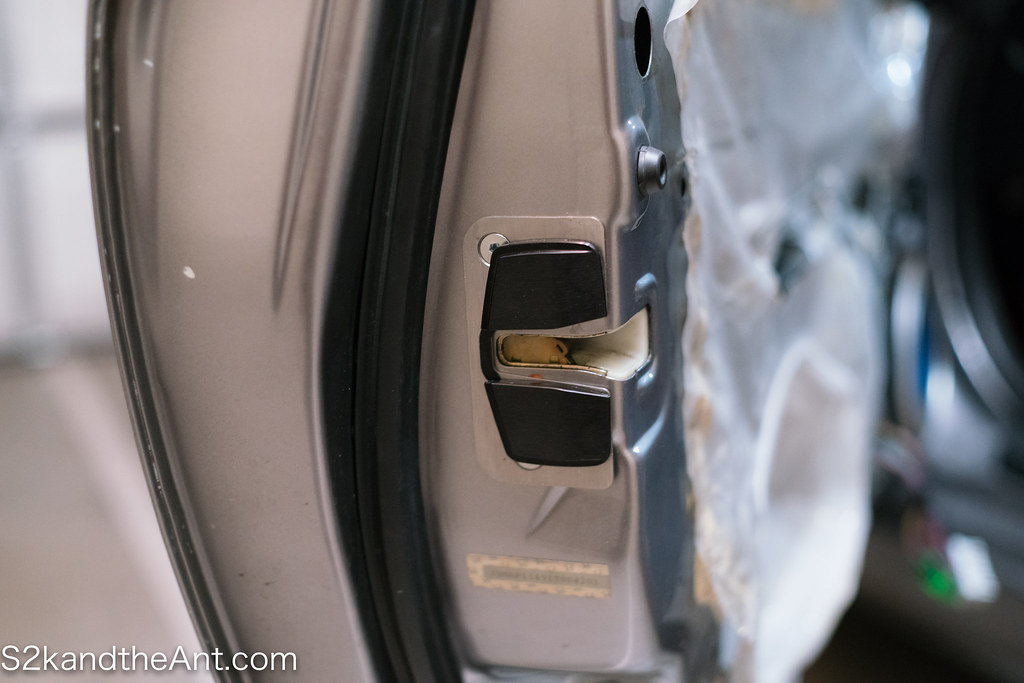 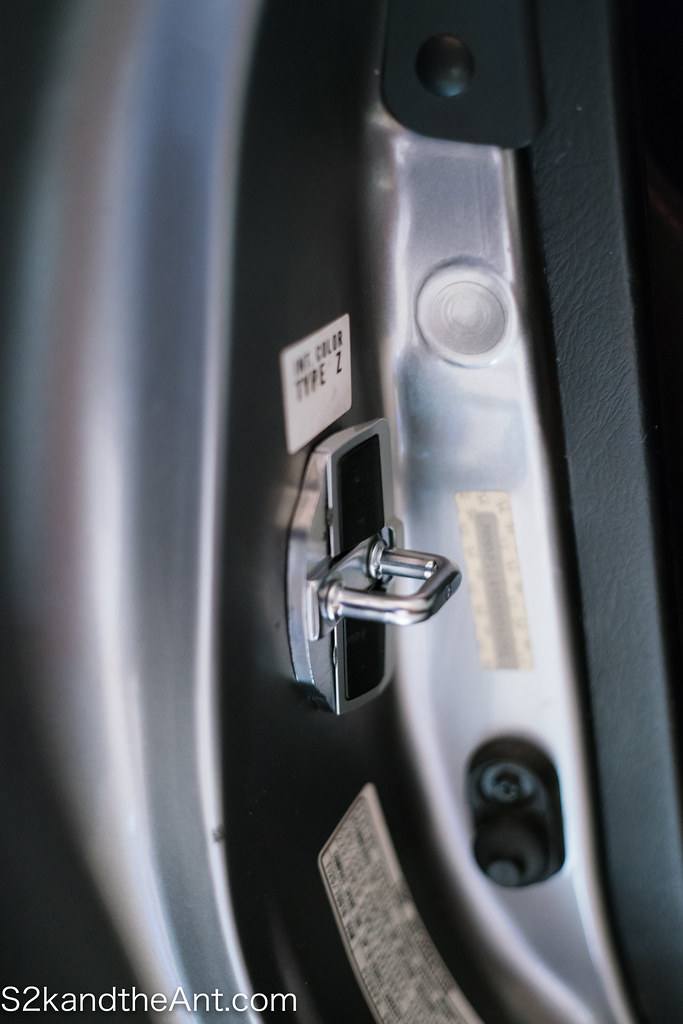 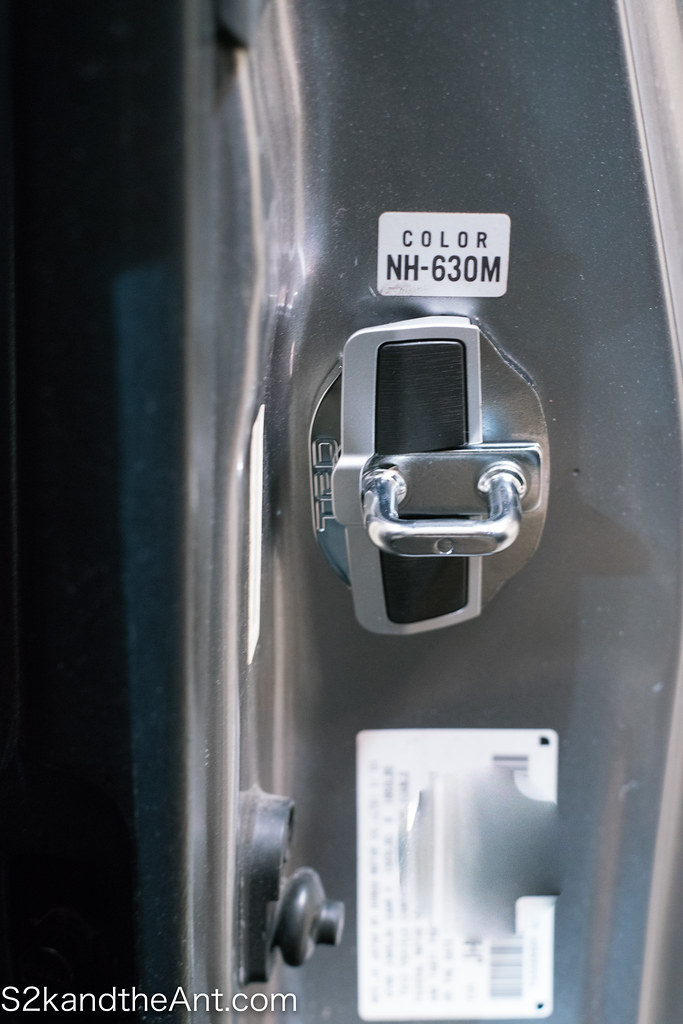 Screw in the TRD Door stabilizer on the chassis side using the OEM honda screws.

Close the door and pray!  For some reason I was able to get the passenger side of my car to be flush, while the driver’s side intrudes a bit.  I might be because my car was involved in a hit and run on that driver’s side years ago….. After the install I notice my doors have a much louder thunk when shutting the door than before, a much more solid feeling.  As of driving dynamics wise, I feel that the car is stiffer, but it could all be in my head…..

The last picture I have of my S2k before it was parted out….. The best things about cars is that you can always come back…. maybe one day.  Sooner than later

Checkout these links of people on Mikara that installed the TRD door stabilizers on their S2000!