Another week gone by another week of grueling work and another week of meets to de-stress. Back on the east coast I barely went to meets, maybe because the S2k scene was weak, or the weather kept people inside. The quality of cars on the west coast is 2nd to none in the USA, I know people on the East coast would like to think cars from Florida, NYC Metro area, or the DC area can compete…… Currently it’s almost November and the temperatures is in the 80s, I would be freezing my ass in Boston right now, but I’m still driving around my S2k like it’s summer in Virginia, did I mention the canyon roads? 🙂

My Authentic Amuse bumper never really sit flush with my fender near the corners of my headlight. I told a shop to fix it when I got painted…ahem Sports Car Shop…. but they never really fixed it. I took a closer look this weekend and it looked like I was missing the bumper stiffener that bolts up the bumper to the chassis. I went ahead and ordered part numbers 71105-S2A-000 and 71106-S2A-000 and their respective bolts. This goes to show you how shitty of a job sports car shop did and how they over looked all the small things, they didn’t even know I was missing these parts, I thought you guys did tens of thousands of dollars of work on S2ks? 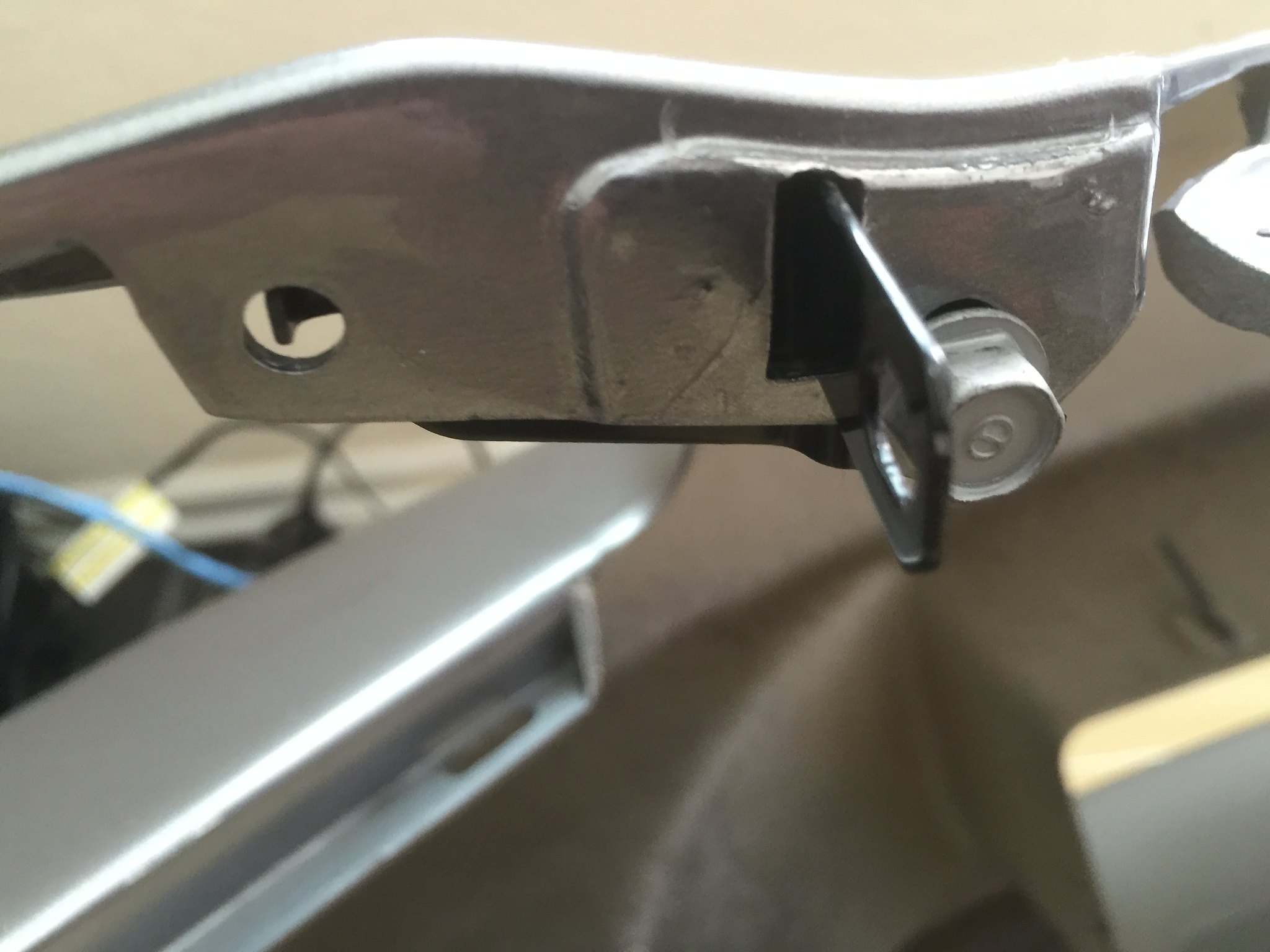 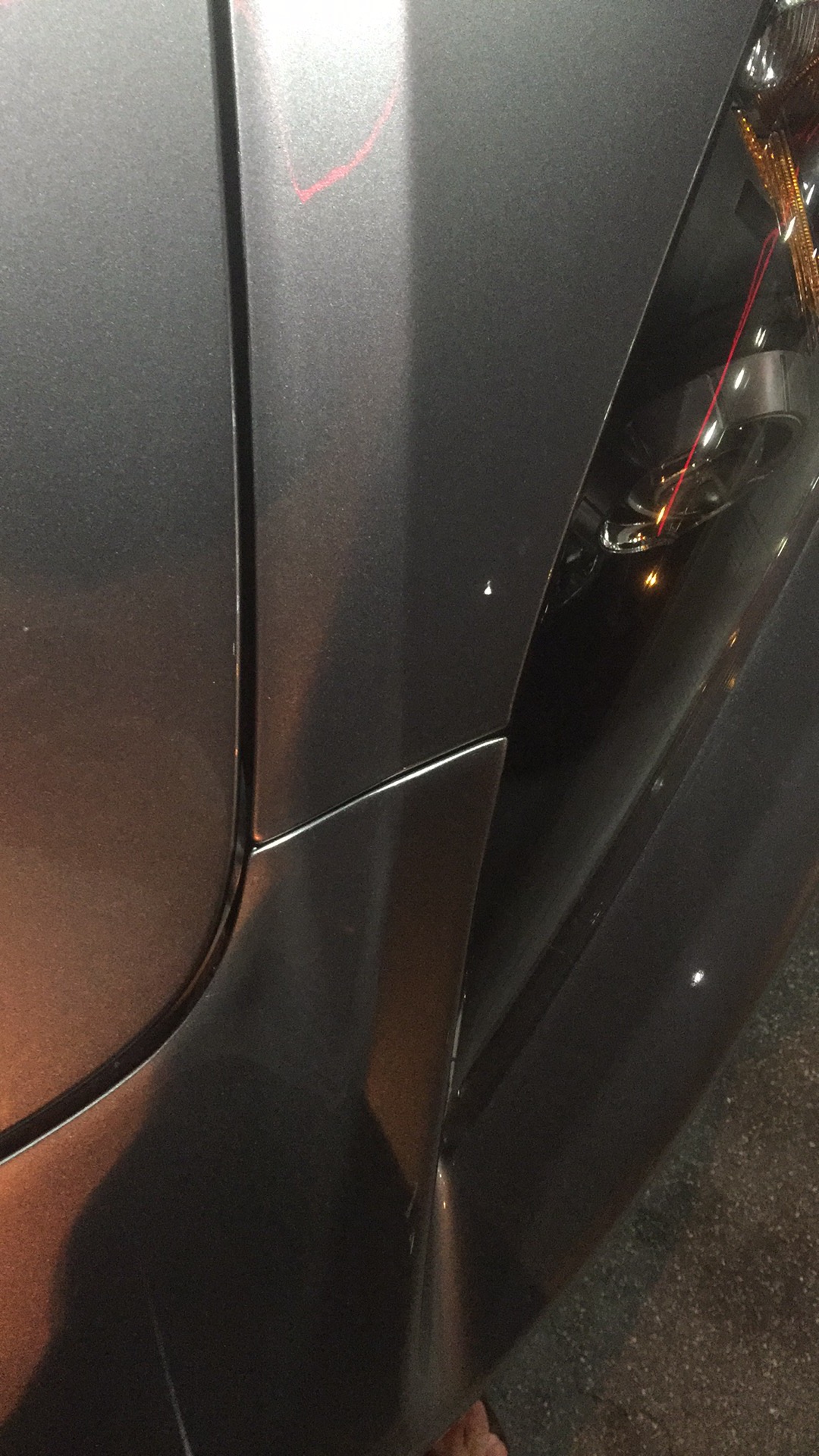 After I fixed it up

Still not 100% perfect since that fender has been hit before, but much better than before!

Here are some overdue pictures from a meet we had in San Gabriel last week. I thought I could hand hold my camera, but I got some really bad shakes….. Here are the only usable pictures….. 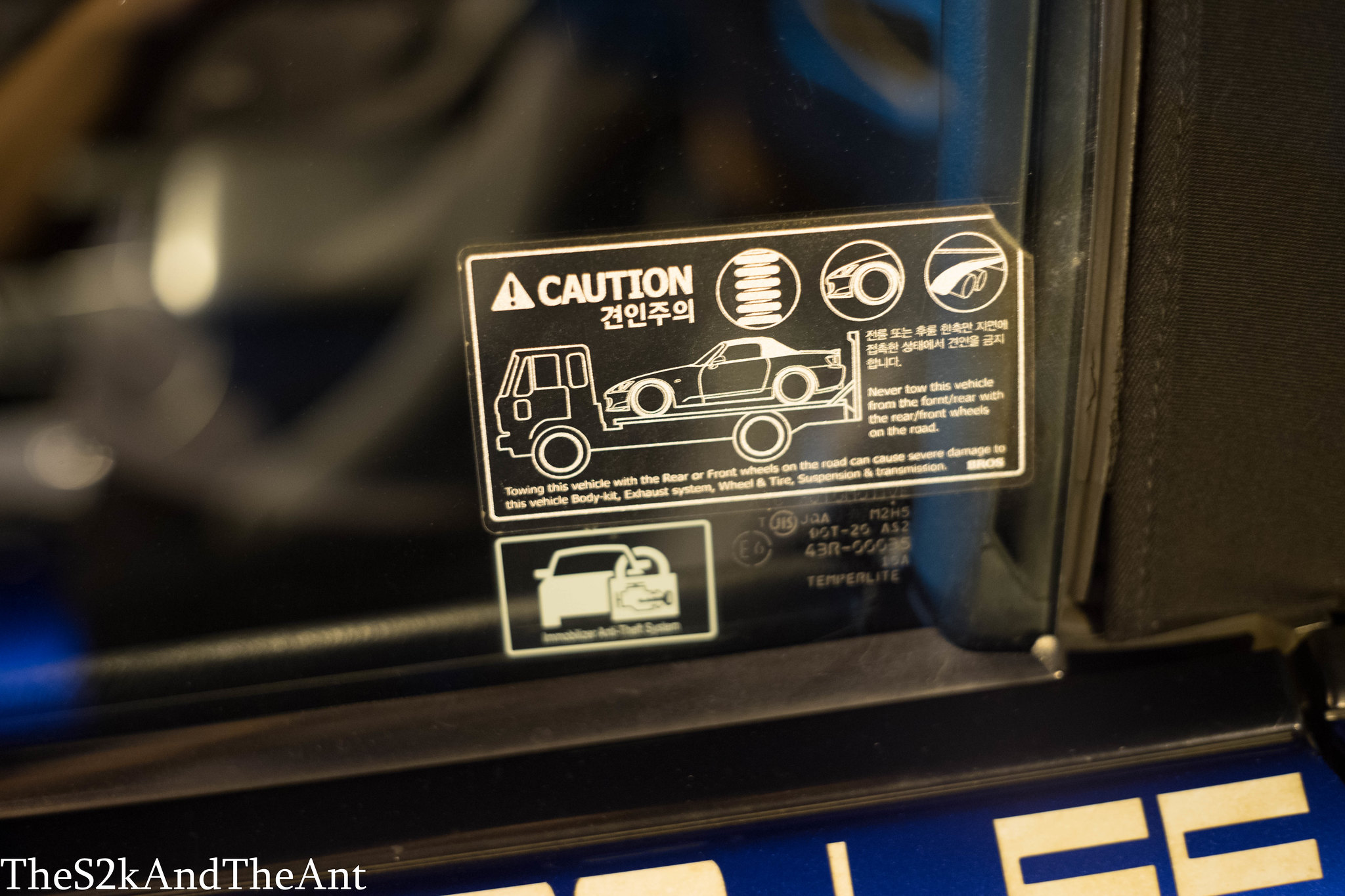 This sticker is pretty cool 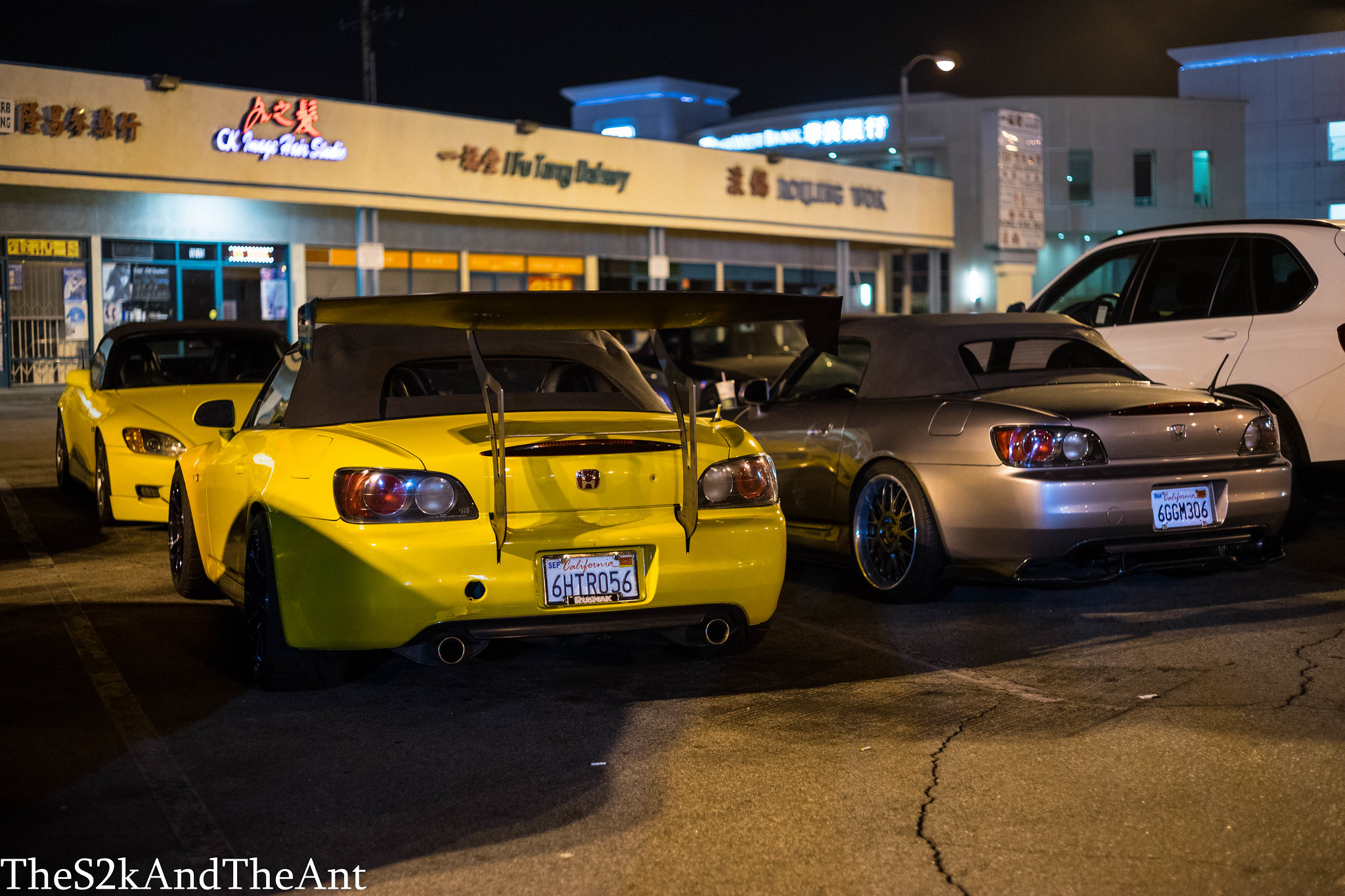 This kid bought out this “prototype swan neck wing” They look cool, I gave it a small push and it swayed a lot. I have a feeling we’re gonna see more Swan Neck Wings on everything….. 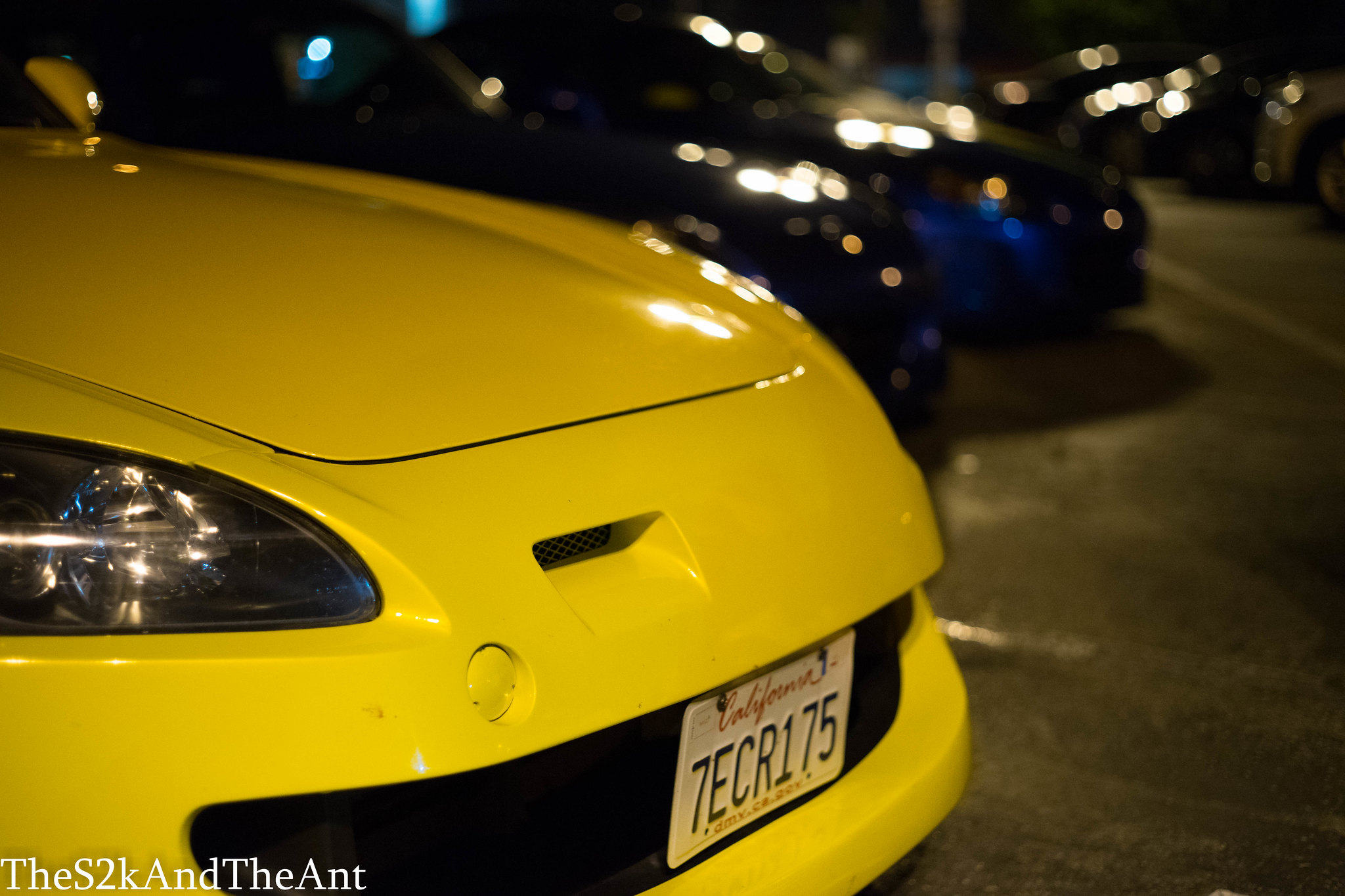 Clement brought out his tracked out “mugen” faced s2k. Check out his build on S2Ki Here It’s a cool build, just that replica bumper kills me……. I know it’s a track car, but still…. I checked out another meet in Irvine last week 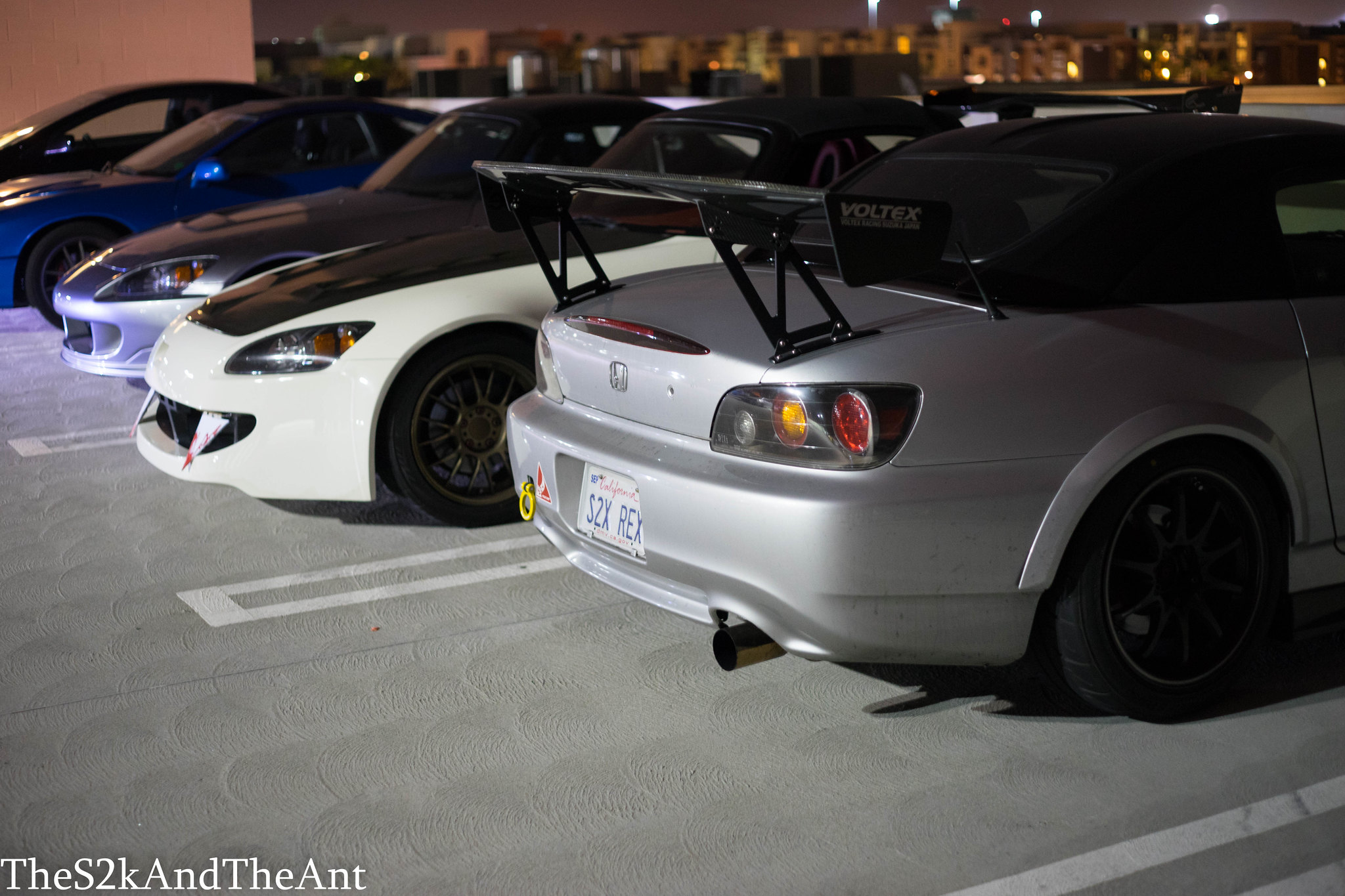 Some tracked out S2ks…..The S2ks in Irvine are definitely higher quality than the S2ks in the 626. Much more expensive parts, and higher quality builds. It could be that the Irvine S owners are older, while the 626 crowd is much younger.

Here are some pictures from the 626 Meet we had this week. 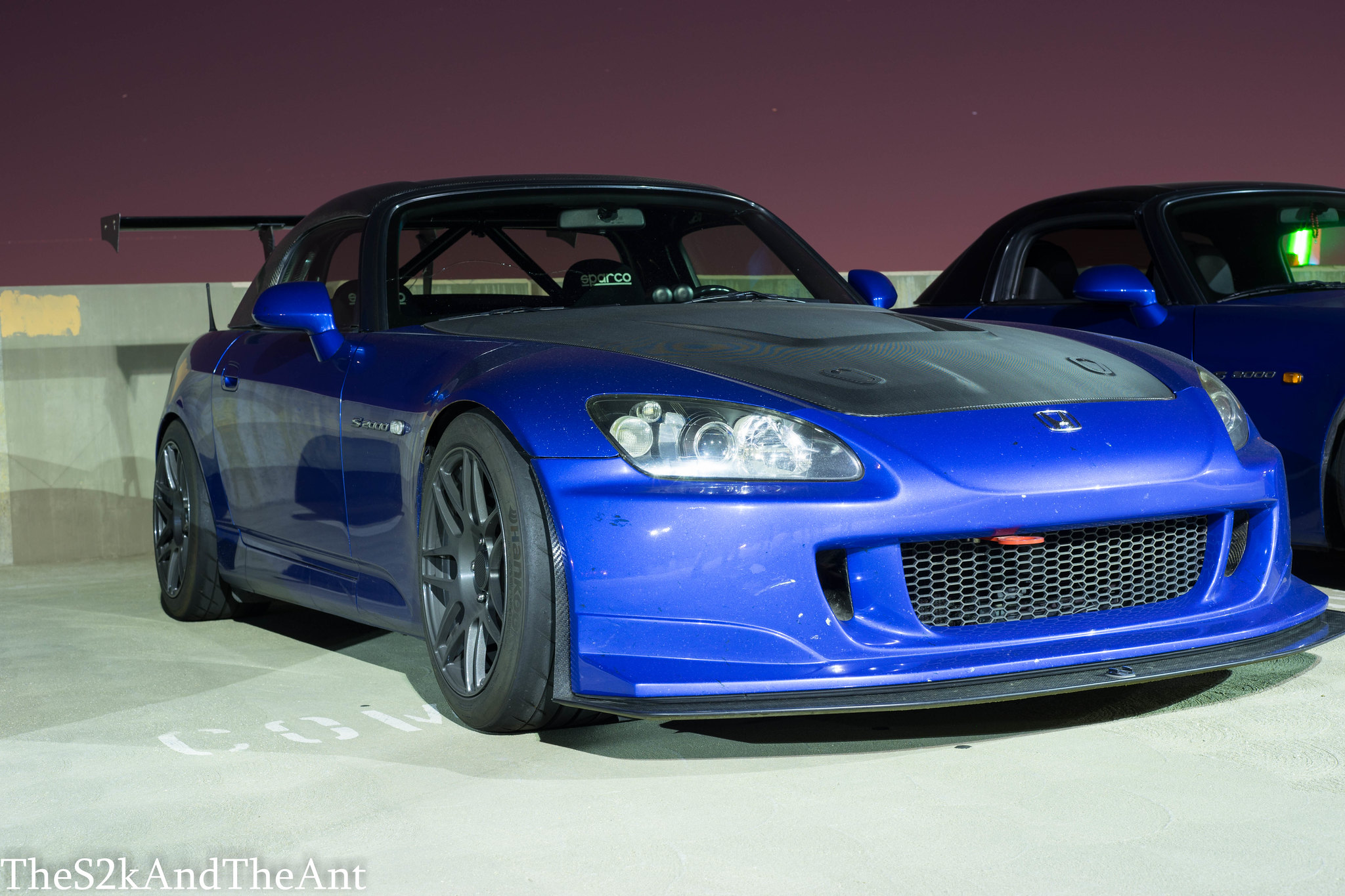 Chris is an Mechanical Engineer by trade so most of his car he did himself. 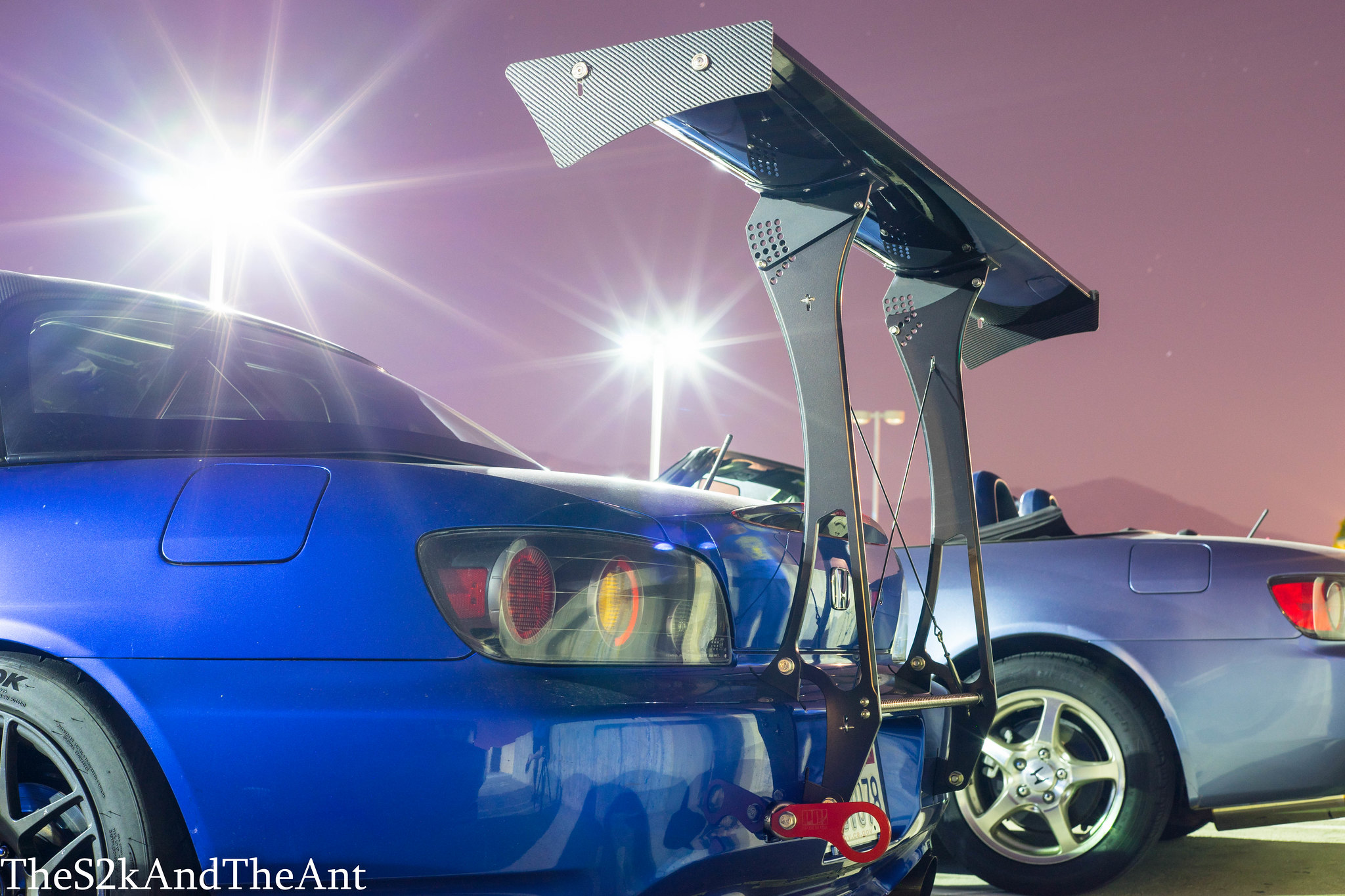 He crafted this custom swan neck wing. Everything you see here is what he created and made sure it’s structurally sound, when I pushed on this wing it did not budge at all, much better than the yellow car from earlier. Since he actually tracks his car, he requires absolute reliability, and the best part, the trunk still opens. 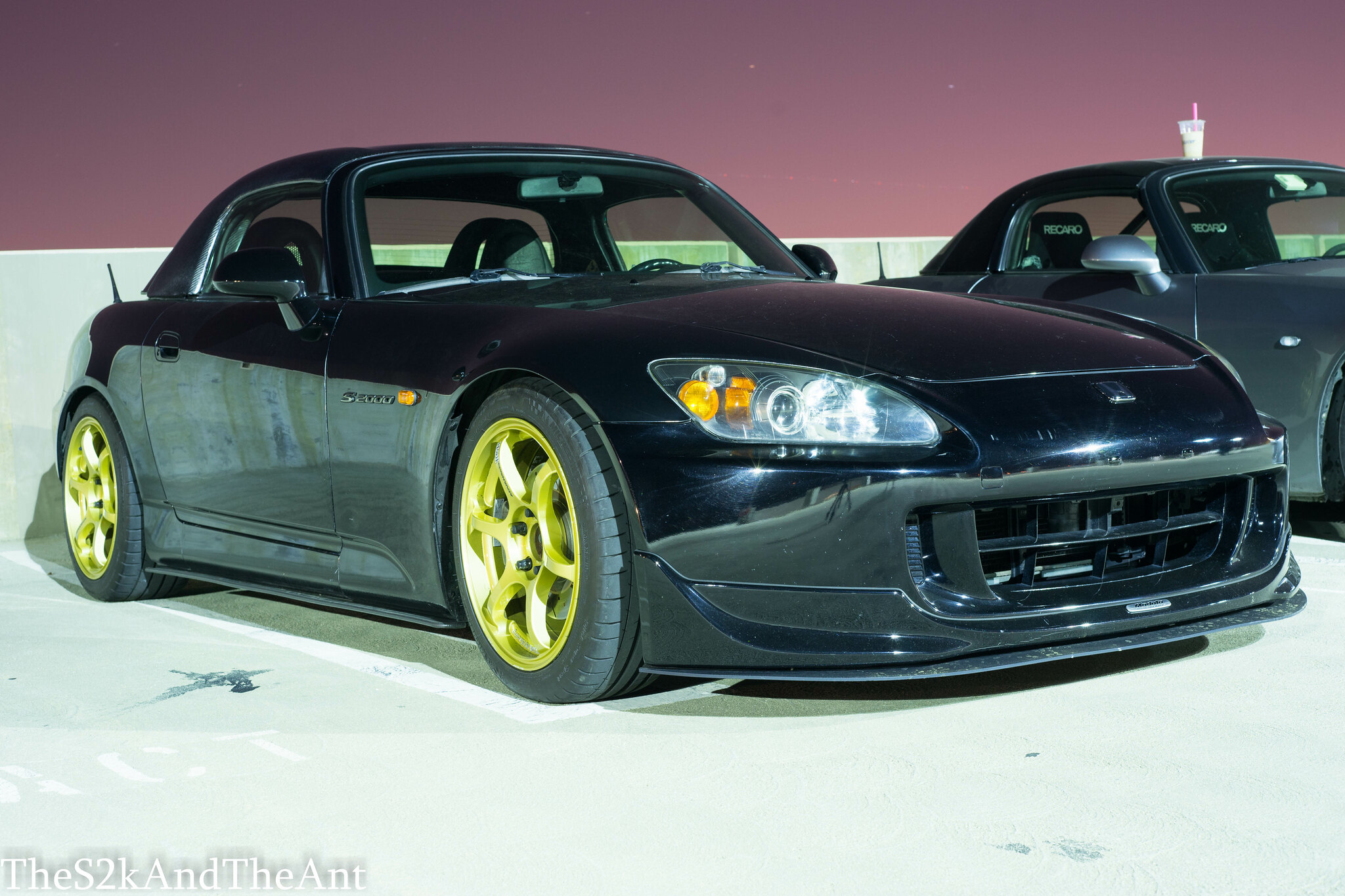 Brandon’s Ap2 on Gold Advan RGII, they’re for sale by the way! 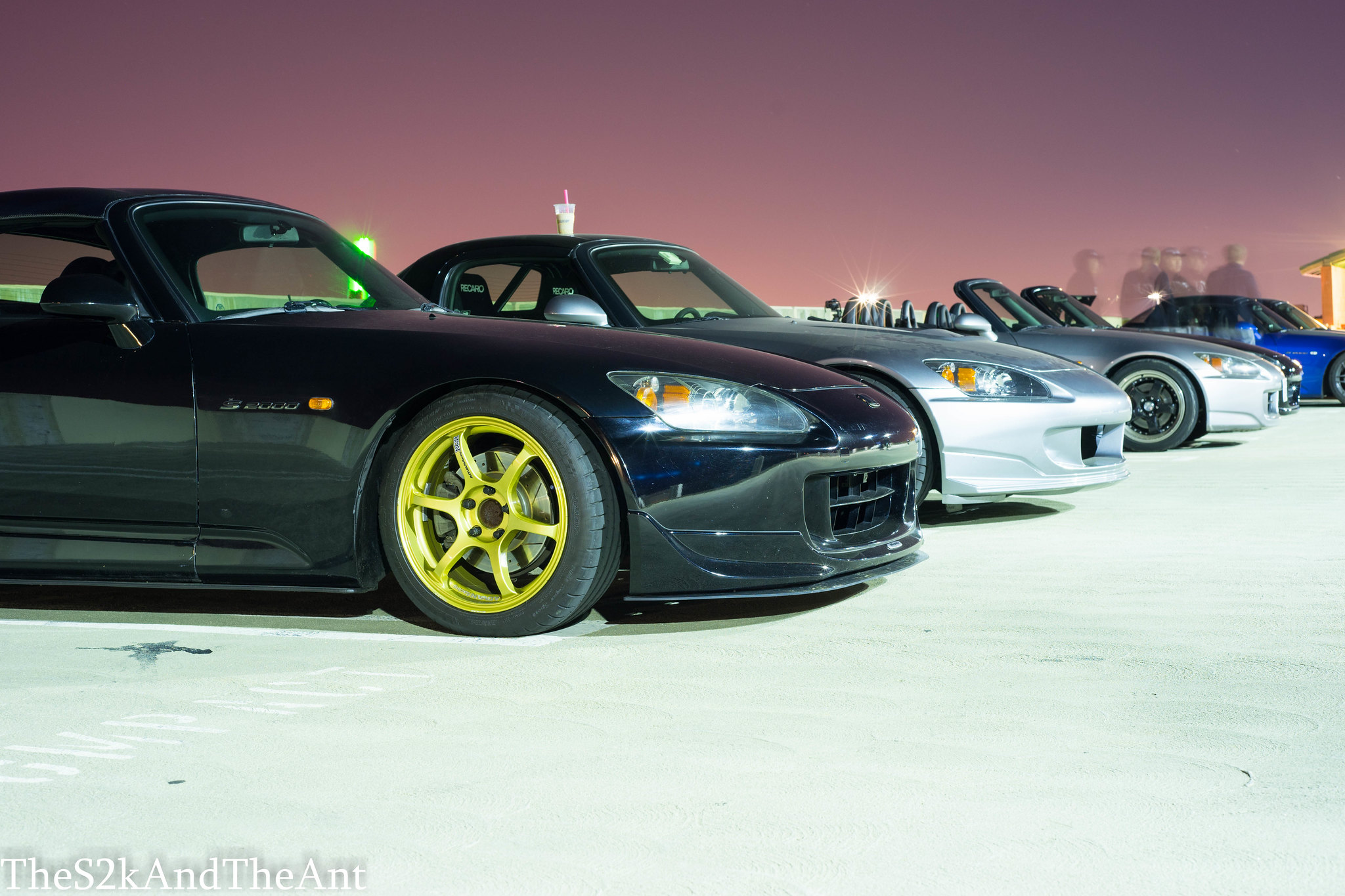 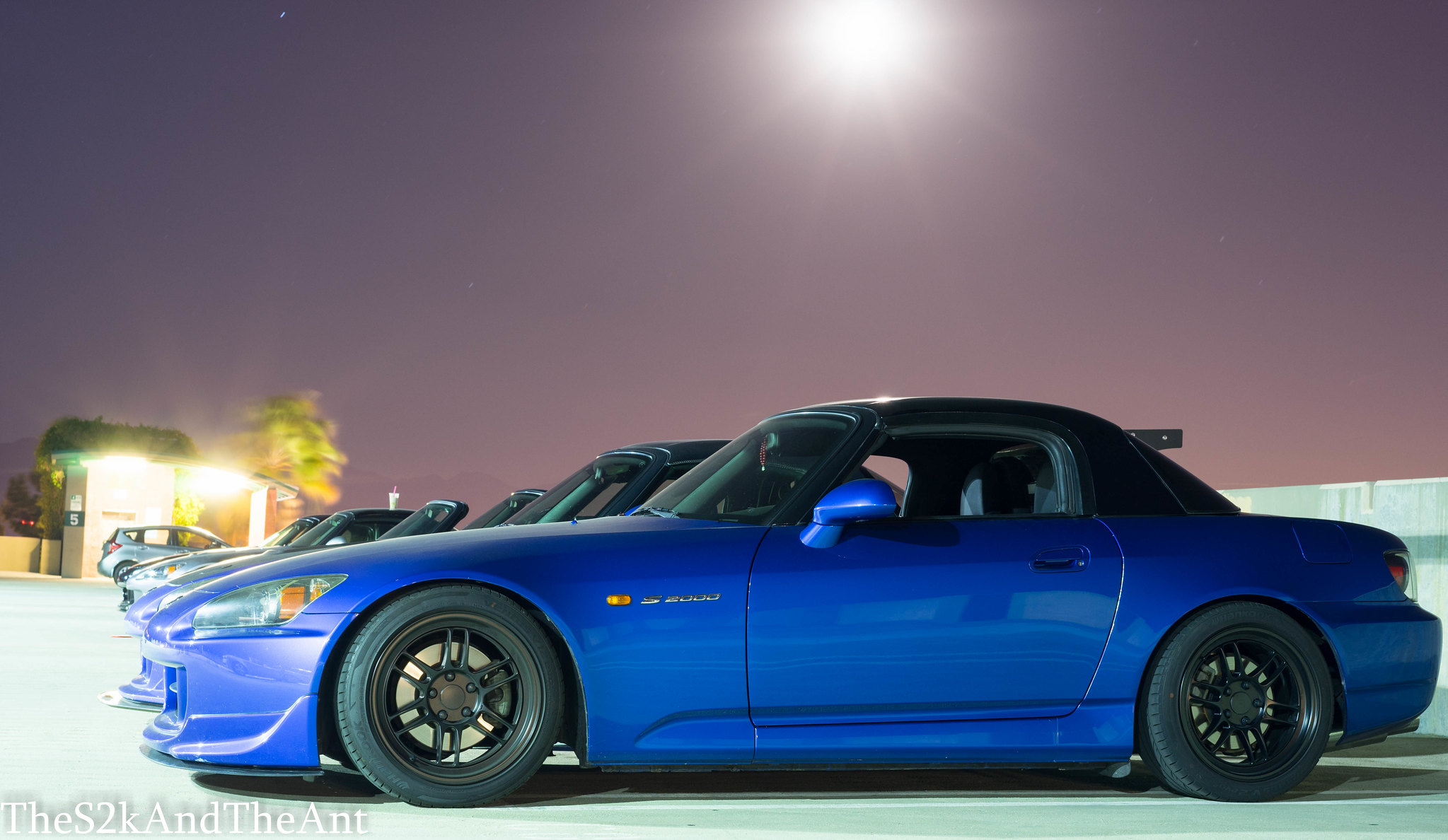 That wraps up this post, see you next time.

For those 10s of followers I have. Come out to the meet we’re hosting this upcoming Thursday!!!